Trump Endorses Rubio. Doesn’t He Know None Of These Conquistador-Americans Can Be Trusted To Defend The Historic American Nation?

Earlier: Rubio, Republicans, “Our New Spanish-Speaking Overlords,” And How To Fight Creeping Bilingualism

Donald Trump’s recent endorsement of Senator Marco Rubio for re-election in 2022 has American nationalists rightly skeptical of what POTUS 45 is thinking [That sigh of relief you’re hearing from Marco Rubio? Trump just endorsed him for re-election, by Anthony Man, South Florida Sun Sentinel, April 9, 2021]. Has he fallen for Jared Kushner’s bad advice: move to the “middle” and appease the Ruling Class? Rubio, although originally a Tea Party candidate, has become a pillar of don’t-rock-the-boat Republicans. And he’s part of the ascendant clique of Hispanic Republicans who all too obviously don’t care about preserving the Historic American Nation.

But that doesn’t mitigate his past role as the ringleader of attempted immigration sell-outs. Look no further than his Gang of 8 Amnesty during the Obama era. Rubio’s change in rhetoric is welcome, but he still can’t be trusted.

Take a look at what he's pushing now, and at what he’s said about Trump’s MAGA base: 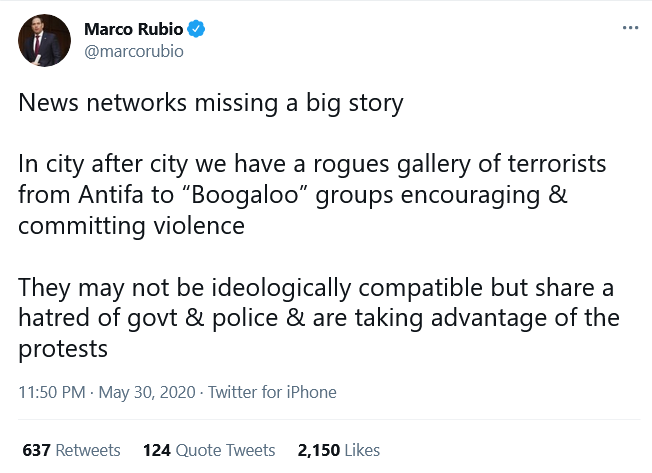 I suspect that Rubio’s purported change on immigration is largely the result of Trump’s influence in the GOP. All things being equal, GOP hacks like Rubio would revert back to their cheap labor ways absent external pressure from the grassroots.

Rubio simply cannot be trusted to deliver the goods on immigration restriction. Recent example: He wants to import Sunni Muslims, the Uyghurs, because China is “persecuting” them [Rubio, Coons Introduce Bill to Grant Priority Refugee Status to Uyghurs Persecuted by the People’s Republic of China, Rubio. Senate.gov, April 13, 2021].

The United States needs more Muslims? And why is what China does to its “minorities” any of our business?

Truth is, and I speak as a Venezuelan immigrant, most Hispanic Republicans cannot be trusted to hold the line against the globalist lunatics who want to turn America into a banana republic.

Fate, apparently, destined me to become the token Hispanic pattern noticer. So let me explain what Rubio and his rising class of Hispanic GOPers have in store for the Historic American Nation.

One thing that made my Spidey-Sense tingle was last month’s vote to strip freshman Rep. Marjorie Taylor Greene of her committee assignments [Here are the 11 Republicans who voted to remove Greene from House committees, by Cristina Marcos and Mike Lillis, The Hill, February 2, 2021].

Greene is everything the MAGA doctor ordered; thus all the right people hate her, including the 11 House members who voted to Deep Six her committee assignments.

Patrick Cleburne exposed the Stupid Party sellouts who joined the Evil Party to give Greene the Steve King treatment. Most were boosters of mass immigration. And Hispanics stood out, another sign that the immigrants of the last 50 years are cut from a different bolt of fabric than those of yore.

Another example: Anti-Greene GOP sellout Florida’s Mario Diaz-Balart has an odious track record of voting wrong not only on immigration but also on gun rights. For instance, he voted for a universal background check bill in 2019 that passed the U.S. House.

Indeed, 2019 was a mask-off year for Diaz-Balart on immigration. He was one of the few Republicans traitors who voted for the American Dream and Promise Act, which would have granted permanent status to foreigners who entered the country illegally as minors and others with Temporary Protected Status. Even worse, Diaz-Balart approved of legislation that would have given more than 1 million illegal-alien farmworkers green cards.

These days, he is proudly working with Democrats to extend TPS protections to Venezuelan refugees: 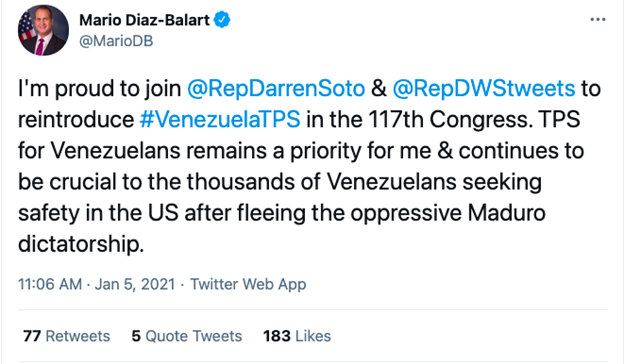 As I’ve written before, as a Venezuelan I think America does not need more Venezuelans!

Diaz-Balart voted for the Dream Act and another bill legislation that would allow illegal aliens to join the military as a path to citizenship. He voted for massive Amnesty bills such as the 2021 Promise and Dream Act and the Farm Workforce Modernization Act. Both would replace displace American workers with foreigners, and further accelerate non-white population growth in America. No wonder he has a richly-deserved D from Numbers USA.

Joining Diaz-Balart are Cuban newcomers and fellow Floridians Carlos Gimenez and Maria Salazar, who are part of the horrendous new “Force” and “Freedom Force” caucuses in the GOP. Salazar and Gimenez both voted for the previously mentioned amnesty bills.

I recently wrote about Salazar, so there’ s no need to reprise her awful record. A few tweets will show how bad she is. 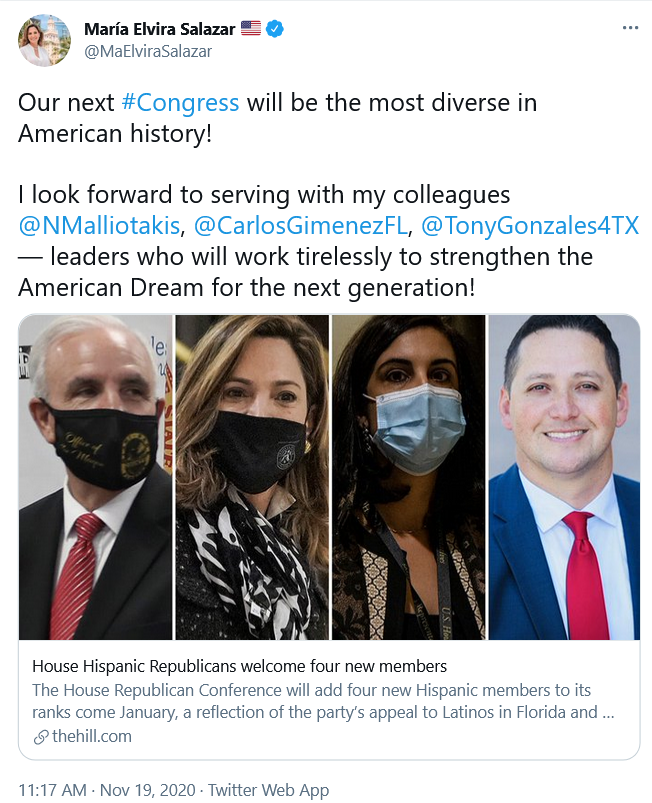 “My freshman class has more women than ever in history of the Republican Party, has more veterans, has more African Americans, has more Asian Americans … that goes to show you the American exceptionality which is still at play.” -@MaElviraSalazar pic.twitter.com/8l2k4zNbTA 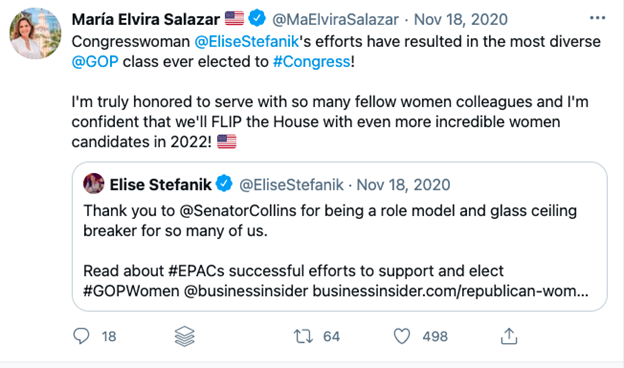 On top of pushing the cult of diversity onto the GOP, my guess is that white Hispanics like Diaz-Balart, Salazar, and their Conquistador class, often Cuban, want to create a facsimile of the Dumpster fires they fled from, via mass immigration. These aspiring Hispanic oligarchs want nothing more than a tropical fiefdom of helot laborers over which they can keep the whip hand—a microcosm of what large swathes of Latin America look like even now [Covid-19 Exposes Latin America’s Inequality, by Linnea Sandin, Center for Strategic and International Studies, April 6, 2020].

Beyond that, however, they are not only completely useless in fighting the anti-white Left, but also might join it to help dispossess Historic Americans.

Personally, I want nothing to do with this. Nor should any rational American with a modicum of respect for the Founders. It’s time for real American to understand that the overwhelming majority of Hispanics—Democrats or Republican—cannot be trusted as allies against the Globalist American Regime.

It would behoove national populists to hit the books and acquaint themselves with Carl Schmitt’s friend-enemy distinction [The Concept Of Carl Schmitt, by Paul Gottfried, The American Conservative, October 16, 2015].

The Historic American Nation needs reliable champions. They will mostly come from America’s forgotten heartland. Like many other foreigners, Hispanics cannot be trusted to help legacy Americans deprogram the country from the cult of multiculturalism. The quicker we recognize that, the less of a headache we’ll have in the political battles ahead.

What is “exceptional” about America is the rule of law brought here by white British settlers. We owe our system of self-government to these men and their immediate posterity. Without those “evil” whites, America would have remained untamed wilderness.

Color me doubtful that Rubio, Salazar and their ilk will ever comprehend that. For them, America is just an idea, an abstraction that is not rooted in flesh and blood.