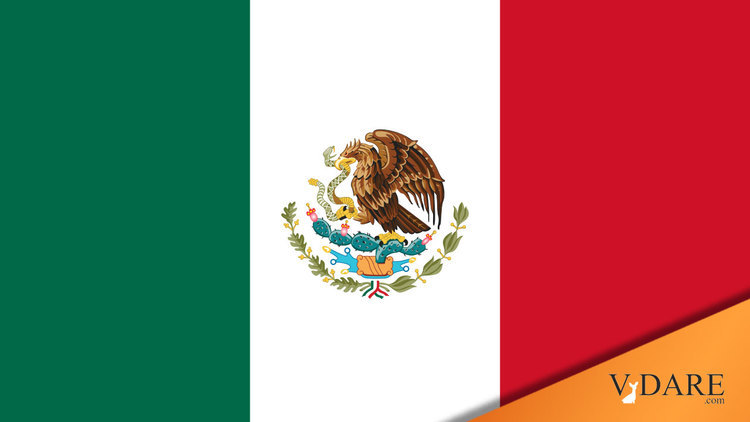 Part 1: Shackled to an [ungrateful] corpse

Will immigration end America's racial divides? Will interracial marriage convert our descendents into a beige nation of Tiger Woods look-alikes? Will the flood of Latin American immigrants, who lack the North American prejudice against "miscegenation," usher in a new era of racial equality where a person's class cannot be assumed based merely on his color?

This is the argument of Gregory Rodriguez, a fine young Southern California journalist of "Unzist" viewpoint - i.e., pro-immigration but pro-assimilation, in the manner of Ron Unz. "Latinos, whose history has been one of mixture and among whom mestizos are the rule rather than the exception, understand hybridity, a notion that America's discourse on race desperately lacks. … Perhaps once we have fully adopted the concept of mestizaje into our racial dialogue, we will recognize that Los Angeles is well on its way to becoming a mestizo metropolis." [L.A. County's Answer for Racial Tensions: Intermarriage, By David E. Hayes-Bautista and Gregory Rodriguez, May 5, 1996]

This theory sounds plausible. In many ways, it is appealing. Yet, there's just one little problem. After an experiment lasting nearly 500 years in Latin America, intermarriage has utterly failed to eliminate racial inequality. Mestizo nations like Mexico and mulatto nations like Brazil are bywords for vast concentrations of wealth among the white ruling class contrasted with extreme poverty among the darkest citizens. In fact, in Mexico racial segregation is worsening.

What Americans don't comprehend is that, although Mexico doesn't have a Color Line, it has an insidious Color Continuum. Latin American immigration will push us toward an even more extensive racial caste system than the white-black gap that has so long troubled us.

As my last column showed, the corruption of Mexican political life that grows out of this hereditary inequality should certainly give us pause.

"But the inequality is not simply economic; it is also social. A government undersecretary (one level down from the top echelon of public service) earned in 1994 (prior to devaluation) approximately $180,000 after taxes … — almost twice what his U.S. counterpart earned before taxes. His chauffeur (provided by the government, of course) made about $7,500 a year. The official addresses the employee with the familiar "tu," while the latter must speak to the former with the respectful "usted." The official and his peers in the business and intellectual elites of the nation tend to be white (there are exceptions, but they are becoming scarcer), well educated, and well traveled abroad. They send their two children to private schools, removed from the world of the employee. The employee and his peers tend to be mestizo, many are barely literate, and they have four or five children, most of whom will be able to attend school only through the fifth grade." [The Atlantic, February, 1997 , "Ferocious Differences"]

Readers in the American Southwest will find this portrait of life in Mexico less and less alien. Of course, here our increasingly faux egalitarian informality that de Tocqueville found so prevalent among Americans dictates that wealthy white American masters insist that their mestizo servants call them by their first name. Nor do whites call their servants "servants," instead, laboriously describing them as "the cleaning lady," "the babysitter," the "gardener," and so forth. Still, as a description of America's future, the essentials are about right. The big difference, of course, is that to prevent mestizos from "becoming scarcer" in elite jobs in America, we offer them anti-discrimination bureaucracies and quotas.

How did Mexico end up like this, despite twenty generations of intermarriage? Surprisingly little is written about Mexico and race. In the U.S., we aren't really aware of the wide racial range among Mexicans since almost all Mexican-Americans are mestizos. This is because the non-Spanish-speaking Indians of the Deep South have been so downtrodden that until recently they lacked the confidence to immigrate. (Mexican Indians who don't speak Spanish, however, have been showing up in California in recent years. Since they haven't assimilated into Hispanic culture in 480 years, perhaps Mr. Rodriguez will inform us when they can be expected to assimilate into American culture.) And Mexico's white elite finds life south of the border far too sweet to come north for anything other than advanced degrees, advanced medical care, and advanced shopping.

The CIA Factbook claims that Mexico's 100 million people are 9% white, 60% mestizo, 30% Indian, and 1% other. These are fairly arbitrary estimates. It could be that some of the whites and Indians are a little bit mixed, but not enough to show. Since Spaniards and Indians tend to share dark hair and dark eyes, and aren't all that far apart in skin color, without DNA tests it's hard tell whether or not people who look pure Spanish or Indian aren't really slightly mixed. For example, audiences can be forgiven for accepting Spanish movie star Antonio Banderas in roles where he plays a mestizo Mexican. (On the other hand, flamboyant, grandiloquent Spaniards and stoic, taciturn Indians tend to differ radically in personality.)

Nonetheless, the Mexican elite tends to look strikingly European. In Tim Burton's affectionate biopic Ed Wood about the worst movie director in history, our hero Ed runs into his hero Orson Welles. The great man complains that in his new film A Touch of Evil, the idiotic studio has cast Charlton Heston as a Mexican! This seemed awfully funny, until I was looking through the handy pictures of top Mexican politicians and drug barons (not mutually exclusive categories) included in Andres Oppenheimer's luridly frank portrait of Mexico, Bordering on Chaos. There I saw a photo of Hank Gonzales, former Mayor of Mexico City and billionaire. (His motto: "A politician who is poor is a poor politician"). Damn, if he didn't look like Chuck Heston's brother. And everyone else looks pure Spanish.

Mexicans don't talk much about race due to the Mexican government's national ideology that We Are All Mestizos. By insisting upon this, the intractable problems of the horrendously exploited pure Indians of the deep South can be obfuscated, while the fact that most of the extremely wealthy are pure white or near white can be obscured.

Yet, despite Mexico's massive problems, we should not wholly denigrate this Mestizo Mythology. Keep in mind that Mexico is still a far more successful country than many similar Latin American countries—such as its southern neighbor Guatemala, where white vs. Indian mass butchery has been recurrent. The Mestizo Myth may have played some role in keeping Mexico from turning into Guatemala. Further, Mexico may be the only country in the Western Hemisphere to assimilate almost completely (genetically and culturally) its West African population. Thus, it's hardly surprising that Mexicans tend to find it prudent to subscribe to the Mestizo Myth.

There's a regional aspect to race in Mexico. The backward south is heavily Indian. The central highlands around Mexico City tend to be mestizo, while the desert North, which was almost unpopulated until the 20th Century, is whiter. Thus, the recent call by the Chicano academic Charles Truxillo for the creation of a breakaway Republica del Norte, which would consist of southwestern U.S.A. and northern Mexico, paradoxically reflects the Northern Mexican's regional/racial bias against the more Indian parts of Mexico.

It seems odd, though, that the Mexican Establishment is so white and getting whiter. After all, in times of upheaval such at the 19th Century Reforma or the early 20th Revolucion, hard-charging mestizos and even pure Indians clawed their way to the top (such as Benito Juarez, the only Indian ever to be President). The ruling Institutional Revolutionary Party (or PRI) started out fairly mestizo.

In the late Twenties, the various warlords, robber barons, insurgent generals, and godfathers who had emerged from the bloodshed as the highly fractious ruling class agreed to institutionalize the Revolution. Their brilliant innovation was to make the President a dictator, but to allow him only a single 6-year term. This inculcated patience in other politicians. If you didn't like the current President because he didn't let enough rakeoffs trickle down to your faction, don't assassinate him, just wait. Your clique's turn would come eventually. Loyalty to the system rather than to the current President became the most admired virtue. This brought a massive reduction in political violence.

Corruption was pervasive, of course. But initially it was fairly broadly distributed, rather like in Chicago's quite similar one-party machine. For example, to shine shoes in Mexico City, you have to belong to the PRI-run Shoe Shine Union. To stay in the union you must show up at PRI political rallies and act wildly enthusiastic about its candidates whenever the TV cameras are pointed in your direction. But in return, the PRI subsidizes your union's health and burial insurance plans. For some poor shoeshine guy, this kind of traditional machine politics is not such a bad deal. As in Chicago politics, in the past, most Mexican politicians were ethnically similar to their constituencies.

So, how come most of the top dogs in the PRI and other high-status realms no longer look mestizo? (For example, although the dour leftist Presidential candidate Cuauhtemoc Cardenas is mestizo, the charismatic rightist candidate Vincente Fox has an Irish grandfather and is 6'5" tall, towering close to a foot over the heads of the average Mexican man.) This whitening trend is especially strange due to all the nepotism among Mexican elites. Many of the big shots in Mexico today are the grandsons and great-grandsons of mestizos who made the family fortune during the Revolution … yet they are much fairer than their distinguished ancestor. What in the world is going on?

In my next column, I'll explain what is happening. But here's a hint: watch Spanish-language shows on Univision and count the percentage of women who are blonde. It's as if the casting director for these shows aimed at Mexican-Americans is David Duke.