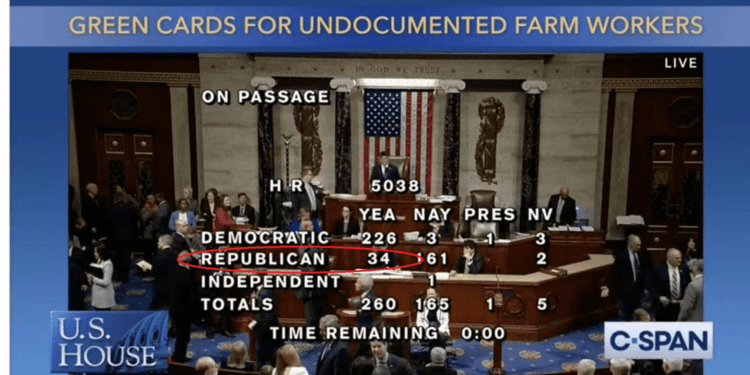 The majority of Congresscritters support the idea of legalizing millions of illegal aliens and turning them into indentured servants for the agricultural industry.

As the Watcher wrote previously:

This Amnesty offers legal status to any illegal who worked in agriculture in the last two years. Those illegal aliens would receive a “Certified Agricultural Worker” visa and be barred from applying for a green card for at least four years...

The bill  expands the H-2A program by an additional 20,000 visas to cover other industries, including dairy and meat-packing...

The bill was sponsored by 25 Republicans, including President Trump’s impeachment allies Devin Nunes and Elise Stefanik. One of the Republican sponsors, California Rep. Doug LaMalfa, said the bill was needed because Americans are too lazy.

America Last Republican Congressman Doug LaMalfa (California) supporting Amnesty Bill HR 5038 and insulting the American people saying that they would rather play Xbox than go outside and work. pic.twitter.com/fiae72rICm

Fortunately, most Republicans voted against it—161 nays to 34 yeas. This is a welcome change from the Fairness for High-Skilled Immigrants Act. The majority of Republicans voted for that green card giveaway to India.

The majority opposition to Big Ag’s amnesty indicates that Senate Republicans are leery of the bill and Trump will likely oppose it. It’s doubtful the president will side against 161 Republican lawmakers, many of whom are his close allies. If Trump opposes, you can expect Senate Republicans to keep this bill from enjoying enough support to override a veto.

Curiously, only three Democrats voted against turning illegal aliens into indentured servants. Three of the Four “Squad” members voted for the bill, while Rashida Tlaib voted present. It is weird that supposed pro-worker progressives would reward Big Ag with cheap labor. How is it pro-worker to side with industry giants against American workers?

VDARE will keep a close eye on this bill. The vote today was not good, but there are signs this bill will be DOA in the Senate.