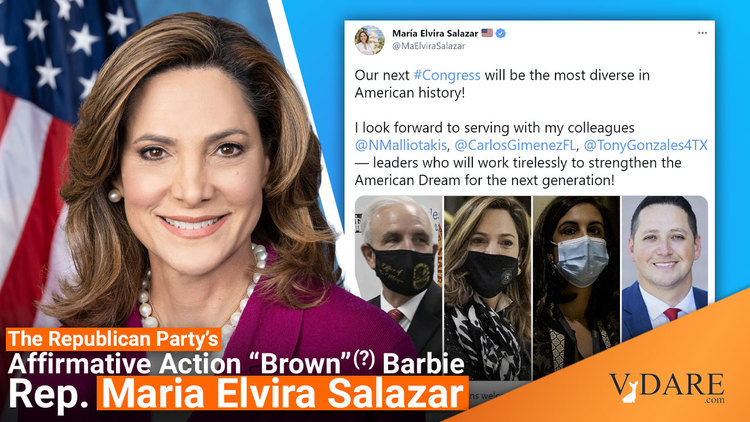 Rep. Maria Elvira Salazar (R-FL) is the GOP’s Affirmative Action Brown Barbie. Except that this race-hustling opportunist is not brown—she’s really a Cuban Conquistador American, in Steve Sailer’s brilliant phrase—but the Stupid Party doesn’t know any better. (And, to be fair, this white-leading-brown formula does seem to work in Latin America.) This replacement for Leftist Rep. Donna Shalala in Florida 27 should have boded well for the GOP. But she is shaping up to be an almost unmitigated disaster.

(Of course, Greene backs a full immigration moratorium, which explains why Salazar and her gang backstabbed her. Or maybe front-stabbed her.)

The daughter of Cuban immigrants, Salazar is a Bushite from yesteryear who remains convinced that bringing in millions of helot laborers from Latin America’s most dysfunctional states will yield positive, long-term electoral results. That explains her affinity for the Treason Lobby and her most recent votes for the Promise and Dream Act (a DACA Amnesty) and the Farm Workforce Modernization Act (an Amnesty for farm workers). Salazar’s votes tell us all we need to know about her stand on the National Question.

Adding insult to injury, Salazar was one of eight Republicans who voted for a universal background check bill on all firearms transactions [House advances bills to expand background checks for gun sales, Senate passage unlikely, by Rebecca Shabad and Alex Moe, NBC, March 11, 2021].

Upshot: Salazar would leave white Americans defenseless against a horde of illegal-alien criminals as they occupy the country and dispossess the Historic American Nation.

Not that we shouldn’t have expected it. In 2018, Salazar ran well to the Left of even mostly useless average Republican on gun control and carbon taxes [Salazar casts herself as moderate Republican open to carbon tax, assault weapons ban, by Martin Vassolo and Lesley Cark, Miami Herald, October 13, 2018]. She still lost to Shalala.

The non-white obsessed GOP caciques think they scored a big Affirmative Action win with Salazar, who has incessantly reminded us about the GOP’s new diversity corps since defeating Bill Clinton’s former health minister. Salazar is particularly enthusiastic about how her fellow freshmen congressmen checked off the right minority boxes.

“Our next #Congress will be the most diverse in American history!” she harrumphed two weeks after the election.

Our next #Congress will be the most diverse in American history!

I look forward to serving with my colleagues @NMalliotakis, @CarlosGimenezFL, @TonyGonzales4TX — leaders who will work tirelessly to strengthen the American Dream for the next generation!https://t.co/4qUyVztqaP

Like a good Stupid Party zombie, Salazar continued gloating on Fox News about the unprecedented levels of minority Republicans:

My freshman class has more women than ever in [the] history of the Republican Party, has more veterans, has more African Americans, has more Asian Americans … that goes to show you the American exceptionality which is still at play.

“My freshman class has more women than ever in history of the Republican Party, has more veterans, has more African Americans, has more Asian Americans … that goes to show you the American exceptionality which is still at play.” -@MaElviraSalazar pic.twitter.com/8l2k4zNbTA

But more ominous than her typical GOP yammering about “diversity” is her praise for New York’s Elise Stefanik, whom the corporate media turned into a “star” [A Trumpist Star is Born, by Anna Gronewold, Politico, December 14, 2019]. Whatever Stefanik’s merit in defending Trump during his first impeachment, she’s a big immigration booster. She voted for 2019’s Farm Workforce Modernization Act that would have Amnestied millions of illegal-alien farmworkers and put them on the pipeline to indentured servitude.

Stefanik and Salazar, reliable shills for Big Business, voted for the reintroduced act when it passed a few weeks ago.

Significantly, Salazar is more concerned about serving Latin Americans rather than real Americans, perhaps inevitable given her district’s demographics: 70 percent Hispanic, less than half of them U.S.-born citizens.

In a Spanish tweet addressed to Nicaraguans and Hondurans, Salazar promised to fight for aid to these countries when Hurricane Iota pounded them in November.

So an Hispanic elected official with roots in Cuba and Puerto Rico plans to send more American tax dollars to Latin America because of her constituents.

Whoever would have guessed?!

A question: Will Salazar support aid to millions of Americans who have been displaced by decades of “free trade,” outsourcing, and mass immigration? Will she favor a jobs program for the hundreds of thousands of Americans struggling to make ends meet in the Rust Belt?

I’m not holding my breath. We can safely assume that she and the majority of Hispanics and other foreign-born and/or foreign-descended elected officials will not fight for the interests of American whites.

Unfortunately, we will likely hear more about Salazar. Republicans with a minority fetish will, of course, boost her non-stop. After all, despite her obviously white skin, she’s a “minority.” That is an unsurprising stance given her reporting stint with Spanish-language subversives Univision and Telemundo. Like Univision’s Jorge Ramos, Salazar’s white complexion betrays her Conquistador-American past—and future?

Salazar “has a message for her party,” Politico’s Beavers reported of her squabble with Miller (cited above):

I am a brown girl from the ‘hood, who is a Republican, who is coming to tell my party that it’s time to wake up and smell the votes.'

It's time for us to be sending the right message to the largest minority in the country. We are 20 percent of the population. We are 60 million people … We are 30 million votes available

No, she’s not “a brown girl.” And that claim is incandescently absurd.

Good thing is, Salazar’s House faction is weak. With House members such as Greene, Mo Brooks (R-Ala.), Lance Gooden (R-Texas), and Paul Gosar (R-Ariz.), among others, an America-First congressional bloc not enamored of the PC conservatism of yore is building—albeit without a single GOP pro-immigration Cuban member.

Granted, the GOP is still in the minority, but with a little luck at the polls next year—Democrats have just an eight-vote margin—a few more “Trumpist” voices might be added to Congress.

But Salazar must be watched and exposed. Any elected official who cannot, as Greene did, call for an immigration moratorium must be viewed with extreme suspicion.

I say that as a former GOP operative myself. I was and am discouraged by the rote answers from Stupid Party operatives on the National Question.

“I’m with you on illegal immigration,” they earnestly say, “but I have no problem with immigrants as long as they come here legally.” Then comes the “nation-of-immigrants” hooey.

Push a normie Republican hard enough, and he’ll chirp like a Treason Lobby leftist. That’s how programmed they are. More often than not, I’m usually the sole rational voice in the few Republican and conservative circles with which I’m involved.

As an immigrant, I can tell you immigration is a question of national destiny. Trust me, I know. Immigration isn’t about the “freedom” of “migrants” to move. It’s about us, as Americans, and whether we’ll have a country 50 years from now. Mass migration will irreversibly transform this country.

To rephrase James Carville for the benefit of Salazar and her pals: it’s the immigration policy, stupid.

Wishful thinking won’t change that. Neither will regurgitating tired tropes and platitudes.

And one more thing: It’s time for the Stupid Party to admit that it’s America’s de facto white party. That’s whose interests the party must defend.