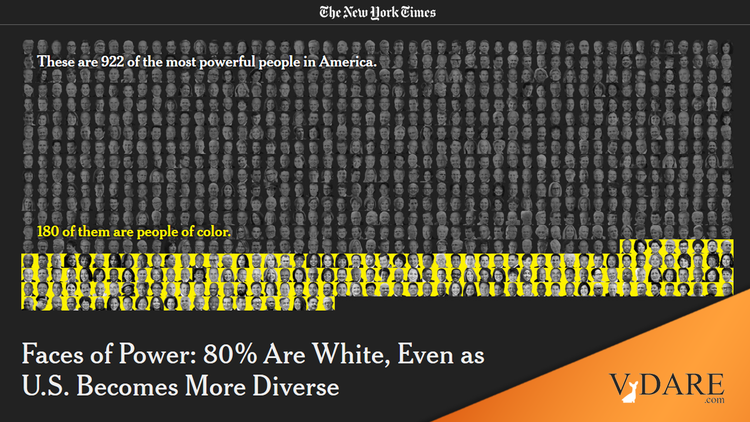 NYT: America's 180 Most Powerful Persons of Color Include A Lot Of White Spaniards

The most powerful people in the United States pass our laws, control Hollywood’s studios and head the most prestigious universities. They own pro sports teams and determine who goes to jail and who goes to war.

A review by The New York Times of more than 900 officials and executives in prominent positions found that about 20 percent identify as Black, Hispanic, Asian, Native American, multiracial or otherwise a person of color. More than 40 percent of Americans identify with one of those groups.

Even where there have been signs of progress, greater diversity has not always translated to more equal treatment.

25 people command the largest police forces. 14 are Black or Hispanic.

What? I thought the police were Systemically Racist?

While half of the 25 largest police forces are run by people of color, the shootings and killings of Black people by white officers this year are a painful reminder of systemic bias. The rise of people of color to positions of leadership has not been a guarantee against the targeting of marginalized groups.

One might almost think that the problem stems more from the behavior of criminals.

By the way, the NYT lists Michel Moore, chief of the LAPD, as a Person of Color because he’s part Basque. But aren’t Basques ultra-European? Similarly, Mayor Garcetti claims to be Mexican through his paternal grandmother, but at least he’s not claiming to be Basque…

29 prosecutors charge people with crimes in those jurisdictions. 12 are Asian, Black or Hispanic.

Almost half of the district attorneys in the cities with the largest police forces are people of color. Jackie Lacey, Los Angeles’s first female and first Black district attorney, has been criticized by the Black Lives Matter movement for resisting efforts to reduce prison populations, which often have disproportionately high numbers of Black and Hispanic people. The group has endorsed Ms. Lacey’s challenger in a closely watched race for November.

Ms. Lacey’s opponent, Soros-funded pro-criminal George Gascon, looks white, but he was born in Havana so presumably that makes him PoC.

24 people lead the Trump administration. 3 are Asian, Black or Hispanic. …

9 justices sit on the U.S. Supreme Court. 2 are Black or Hispanic. …

8 men are military chiefs. 1 is Black.

Of the people at the top of the 25 highest-valued companies, 6 are Asian or Black.
Fewer than a quarter of the most valuable public companies are run by people of color, and Black leaders are becoming less represented in these roles. There are now four Black chief executives running Fortune 500 companies, down from six in 2012.

Four of the CEOs of top 25 publicly traded firms are South Asians, one East Asian, and one (Merck) is black.

Of the people who head universities ranked in the top 25, 1 is Hispanic.

Leo Rafael Reif (born August 21, 1950) is a Venezuelan-American electrical engineer, writer and academic administrator. He is the president of the Massachusetts Institute of Technology, succeeding Susan Hockfield on July 2, 2012.[1][2] Reif previously served as the Institute’s provost, as the head of MIT’s Department of Electrical Engineering and Computer Science and as the director of the MIT Microsystems Technology Laboratories.[3]

Leo Rafael Reif was born in Maracaibo, Venezuela, to Eastern European Jewish parents who immigrated to Venezuela in the late 1930s through Ecuador and Colombia. His father was a photographer, and the family spoke Yiddish and Spanish at home.[4]

The 5 people who have the most influence over book publishing are all white. …

The people who edit the 10 most-read magazines are all white.

14 people oversee most of the music that is produced and played. 2 are Black or Hispanic.

25 people run the top TV networks and Hollywood studios. 3 are Black or Hispanic.

Of the people in charge of the 25 highest-valued fashion companies, 3 are Asian or Hispanic.

The Hispanic is Pablo Isla, the Spanish CEO of a the giant Spanish firm Inditex (Zara, et al.). It’s good to know that if Pablo moved to America he’d be eligible for affirmative action for our sins.

99 people own professional baseball, basketball and football teams. 6 are Asian, Black or Hispanic.

100 people write laws in the Senate. 9 are Asian, Black or Hispanic.

50 people are state governors. 3 are Asian, Hispanic or Native American.

431 people currently write laws in the House. 112 are Asian, Black, Hispanic or Native American, or otherwise identify as a person of color.

It’s almost as if the 1982 Voting Rights Act that mandates gerrymandering House districts to make sure to elect lots of blacks and Hispanics to the House means that there are a lot of Maxine Waters Race Man/Woman types in the House but fewer Barack Obama types who would have a better chance at later winning statewide office.

By the way, one of the Powerful People of Color on the NYT’s list is Rep. Mario Diaz-Balart (R-FL), a Conquistador-American, who looks like me.

Rep. John Garamendi [D-CA] is another official PoC who is included for being half-Basque. Jim Costa [D-CA] gets to be a PoC for being Portuguese from the Azores. Rep. Devin Nunes [R-CA] is a PoC for being 3/4th Azorean. A couple of Republican Congressmen from Oklahoma are whites with traces of American Indian ancestry. There is also a growing number of white Congressmen with unnoticeable Latino ancestry on their mother’s side, like Mike Levin (D-CA) and Alex X. Mooney (R-WV).

Note: People who are Hispanic are defined as those from Spanish or Portuguese culture or origin regardless of race.

On the other hand, while being obsessive about tracking down Hispanic ethnicity among the 922 Most Powerful Americans, the Times has no interest — zero, nada — in counting Jewish ethnicity among the most powerful. Counting powerful white people is proof of the concept of White Privilege, but since Jewish Privilege is not a concept, why would anyone want to look for or against evidence for a concept that doesn’t exist?

For some reason neither the Forbes 400 nor the Bloomberg Rich list are included, perhaps to avoid giving competitors a leg up or to avoid the issues of double-counting.