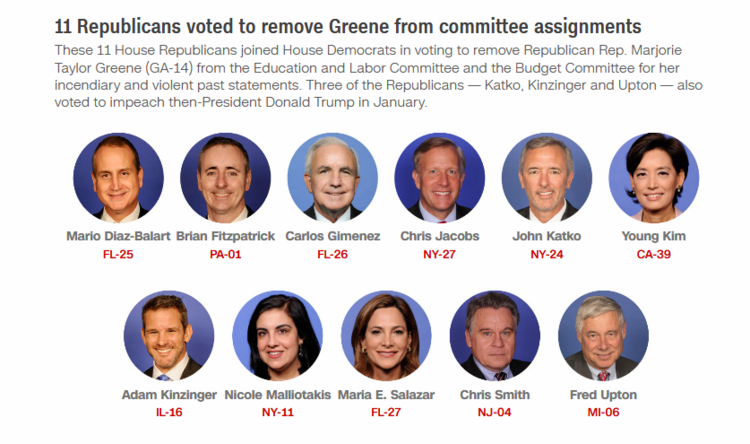 “New Georgia Congresswoman Marjorie Taylor Greene received the Steve King treatment this week. In an unprecedented move, Democrats in the House of Representatives overrode her fellow Republicans to strip her of her committee assignments”.

It is hard to overstate what a disaster this is. Over only pro-forma opposition from the Republican House Leadership, the Democrats have seized the right to dictate to their opponents that their Congresswoman should not be employed, based on her opinions.

This strikes at the root of parliamentary process. Individuals of different views are supposed to come together to compare opinions and see who can command a majority. Crippling their functionality is totally inimical to this process and so is wresting the prerogative of management of their supporters from the Minority Party.

Actually expelling a member for Wrongthink is next. It is probably not far away, as no doubt all GOP Congresscritters realize.

The fact is that parliamentary government was a phenomenon of the British Isles. The shallower the roots American politicians have in the Anglophone tradition, the more we can expect to see these atrocities.

One such atrocity was the fact that 11 Republican Congresscritters voted against Taylor Greene, being immediately idolized by the MSM: Here are the 11 House Republicans who voted to remove Marjorie Taylor Greene from her committee assignments by Paul LeBlanc, CNN, Thu February 4, 2021.

I thought to evaluate these traitors against the Numbers USA 2019-21 rankings: