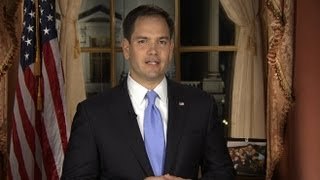 The Fulford File | Rubio, Republicans, “Our New Spanish-Speaking Overlords,” And How To Fight Creeping Bilingualism

Conservatism Inc. is falling over itself to welcome “our new Spanish-speaking overlords”—to adapt the famous scene from The Simpsons (itself adapted from the 1977 movie Empire of the Ants). The Republican Congressional leadership has chosen newly-minted Florida Senator Marco Rubio to give the response to President Obama’s February 12 State Of The Union—half in Spanish.

(It’s a pattern—Rubio gave the GOP response to the Supreme Court’s Obamacare decision partly in Spanish, and spoke in Spanish, briefly, at the Republican Convention).

Does this mean the United States is turning into Mexico?

No, it’s worse—it means the United States is turning into Canada.

Canada has a lot of experience with bilingualism, all of it bad.

I’ve noted before that the ludicrous Canadian custom of making speeches in both languages—saying everything twice, once in English and once in the minority language—is coming to America.

Well, the Canadians have invented an even worse absurdity: the speaker alternates between languages, leaving large parts of the audience unsure what he’s saying.

John Ralston Saul is a member of the globalist elite, born in Ottawa, educated in Montreal and London. He writes books in English, but his website offers visitors the choice of English, French, or Spanish.

I can understand why the lecture might be given in French. Or in English. Or in either with translation. But both with no translation? Do that and you will ensure that more than nine out of ten people in the city [VDARE.com note: Vancouver, B. C.] in which you are giving the lecture will be unable to understand what you are saying. So what is this except a symbolic gesture of... Of what, exactly? Bilingual idealism? Contempt for the unilingual?

The explicitness of that notice is rare but neither the attitude nor the practice are, at least not in Ottawa. Years ago, after moving here, I was amazed at how, in Official Ottawa—i.e. the Ottawa of the federal government—it's perfectly acceptable for public speakers to switch back and forth between languages, without translation, even to the extent of setting up a joke in one language and delivering the punchline in another. This would be admirable in an ideal world in which all Canadians could laugh along. But in this world, this is a very effective way to shutting out the overwhelming majority of Canadians who are unilingual.

Funny. But in fact creeping bilingualism is not funny at all. It’s a serious threat to unilingual members of the majority language community a.k.a. English-speakers, in both Canada and  the U.S.

Among other things, bilingualism ultimately means job preference for the minority language group—and years of language lessons for English-speakers who want those jobs.

Thus in Canada, many federal civil service jobs are reserved for people who speak both languages, which means, de facto¸ it is dominated by French speakers.

George Jonas, a Hungarian immigrant to Canada, has described the dynamic:

If Canada was to be a bilingual country with most power concentrated in Ottawa's federal government, in the nature of things it would be Francophones [VDARE.com note: CanSpeak for French-speakers, but  really it’s a matter of blood] who would end up occupying most positions of authority in it. The inclination is always stronger for minorities to learn the language of a majority. Anglos weren't going to be bilingual in significant numbers.  Francophones would be, and so rule the land.

“Rule the land” means a lot of French-speakers in the higher reaches of the Federal Civil Service.

It also means that leadership of the Liberal Party has tended to alternate between a person of French ancestry and Anglo ancestry.  But, either way, they must be fluent in French.

Canada’s Conservatives, for whom few Francophones vote, also try to recruit candidates who can speak French the way Rubio can speak Spanish—or at least the way George W. Bush could: badly but sincerely. Candidates who can’t do that fall by the wayside, although otherwise qualified and electable. VDARE.com Editor Peter Brimelow wrote in Commentary magazine back in 1987 that

When the federal Progressive Conservative party chose a new leader in 1983, it came under intense pressure to pick one fluent in both “official languages,” although virtually all of its support came from unilingual English Canada and it could technically have won enough seats there to form a government without any Francophone support at all. This scared out of the race a strong Western candidate, the premier of Alberta, and seriously destabilized the campaign of John Crosbie, from the Atlantic province of Newfoundland (who would probably still have succeeded if the English-speaking convention delegates had not been supplemented by French speakers conjured up by affirmative action in Quebec).

The winner was an unrepresentative, Wendell Willkie-type sport, Brian Mulroney, an emollient Montreal labor lawyer with roots in the semi-Francophone Irish community of rural Quebec. Mulroney had only joined the party because of an accident of sectarian politics in his youth. He had never fought a parliamentary election, and his Conservative credentials were essentially based on his self-appointed role as the party’s ambassador to the Francophones. [A Cautionary Case of Bilingualism Commentary Magazine, November 1987]

Canada's federal official bilingualism turned into a jobs program for Canadians of French ancestry—the minority language group—entrenching them in control of the federal Civil Service with remarkable speed. Francophones are less than a quarter of Canada’s population. But less than twenty years after the passage of the Official Languages Act,

"Of deputy ministers and senior administrators the proportion is now 32% francophone. The Privy Council Office is 48.2% francophone. The Federal-Provincial Relations Office is 49.1%, the Canadian Intergovernment Secretariat a resounding 81.8%. The big-spending Department of Supply and Services, which decides whether a contract will go, say, to Montreal or Vancouver, is 41.1% francophone The Secretary of State Department, which hands out federal largesse, is 67.9%. The Public Service Commission, which chiefly decides on promotions within the civil service—will the job go to Peter Black from Winnipeg or Pierre Leblanc of Trois Rivieres?—is 60.5% francophone. And if the francophone proportion of the armed forces during the Second World War was somewhat lacking, the francophone proportion of the Department of Veterans Affairs compensates. It is 41.2% francophone"

In the U.S., I’ve reported that police officers already have to learn Spanish (a) for survival and (b) so they can get points for promotion.

That’s bad, but what’s worse is that one of the jobs that Anglos may be unable to fill is President of the United States.

Marco Rubio is an inexperienced freshman Senator. He’s giving the GOP’s SOTU response to Obama, instead of a grown-up Senator like, say, Jeff Sessions, because he can speak Spanish and is “Hispanic” (actually, a white Cuban).

"I hope very much that I'm the last president in American history who can't speak Spanish,'' Clinton said in a nod to presidential candidates Al Gore and George W. Bush, both of whom are comfortable throwing Spanish phrases into their speeches…"

Clinton didn’t get his wish—the current president speaks no foreign languages at all.

But the report of his speech was headed Clinton says speaking Spanish is not enough for Hispanics, [By Calvin Woodward, Associated Press, June 13, 2000]. Clinton made the obvious point that Hispanics vote for Bill Clinton’s party because they like stuff from the government.

Peter Brimelow commented, based on his Canadian experience (he wrote an entire book on Canada):

…English Canadians speak only English. Therefore they are ineligible for the top offices, and many government positions, in their own country.

The beneficiaries of bilingualism: firstly, the minority language group, who have more opportunity to become bilingual; secondly, the Anglo upper class, who are more likely to spend money on time on language education.

Dubya to Reagan Democrats (not for the first time): drop dead.

Exactly as Brimelow warned, twelve years later—notwithstanding all the Hispanic hype—it is the GOP’s failure to appeal to the white working class, especially in the Rust Bowl states, that cost Romney the Presidency.

Of course, there are options. In complete contrast to Canada’s federal bilingualism, the government of the French-speaking province (=state) of Quebec has defended and imposed French unilingualism.

As Peter Brimelow said at the Pro English panel at CPAC last year:

Over a period of several years in the 70s and 80s, successive governments in the province of Quebec passed legislation which essentially crushed the use of English in Quebec. You could not require an employee to speak English in most circumstances. You couldn’t even display signs in English in Quebec….

I think this example of what the Quebeckers have done, although it’s not pretty, is most interesting. It has actually completely broken the back of the Anglophone resistance to Quebec separatism. If people don’t like Quebec separatism, they leave. In fact the Quebec Anglos are now the most bilingual of all the ethnic groups in Canada….they’re essentially assimilated.

I think that something like this Quebec language legislation is going to have to happen here in the U.S.

It’s not enough to have Official English as the government level. I get email all the time, from people in places like eastern Washington State, who say their kids can’t get jobs in McDonalds and stuff because they don’t speak Spanish. This creeping institutional bilingualism is a ferocious attack on the living standards of the American working class, the blue collar workers—just as current immigration policy in general is.

It will take Quebec-style legislation to stop it. They’ve shown us the way.

Quebec has shown the way. But it’s increasingly clear that the GOP/ Conservatism Inc. is not capable of taking it.

James Fulford is a writer and editor for VDARE.com.