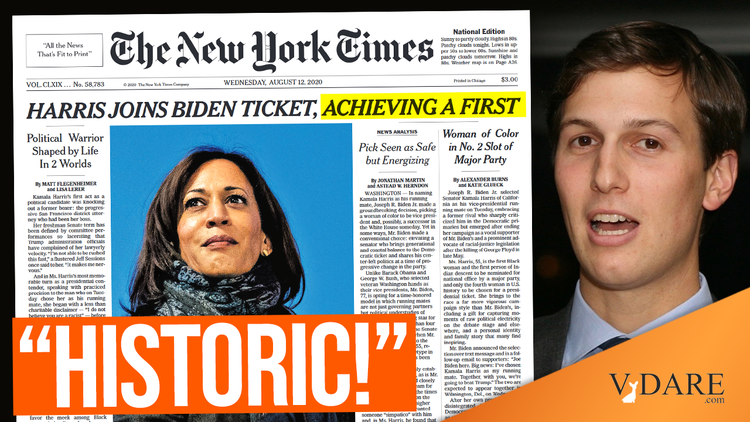 As has been duly noted, the New York Times’ front page celebrating Biden’s announcement of Kamala Harris as his running mate rivaled its moon landing coverage. A gigantic photo of a saintlike Harris took up half of the space above the fold, under a 2-inch headline: “HARRIS JOINS BIDEN TICKET, ACHIEVING A FIRST.”

Specifically, the “first” was: “Woman of color in No. 2 slot of major party.”

History was being made! “It was historic most of all, and especially sweet for many Black women” … Harris “is the first Black woman and the first person of Indian descent to be nominated for national office by a major party” … “It’s a stand-alone milestone, irrespective of who the opponent is.”

(That last quote was from Vanita Gupta, [Tweet her], who was head of the civil rights division in Obama’s Justice Department. As I keep telling you, Black America, immigrants are getting all the good diversity jobs.)

Hey, New York Times! How about devoting three-fourths of your front page with a 2-inch headline to Trump’s picking a young real estate investor as his chief White House adviser?

For Jared Kushner, The Impossible Just Takes a Little Longer

(Me screaming in the corner: “He’s the son-in-law of the person who picked him!!!”)

If Democrats wanted us to treat Kamala’s selection as an historic achievement, the process needed to be color-blind. All the gushing about THE FIRST WOMAN OF COLOR AS VICE PRESIDENTIAL CANDIDATE is like the articles every year gushing about the Nigerian who got into ALL EIGHT IVY LEAGUES!

Ever heard of affirmative action? In the same year, a thousand white and Asian kids with the exact same credentials didn’t get into any Ivy League schools.

Biden made perfectly clear—as did his supporters and sponsors — that he would be considering only women of color. Oh my gosh! A woman of color has somehow climbed to the top of the greasy pole!

Kamala’s big achievement is that she was better than the other women of color with visible positions in the Democratic Party. Of which there were five—maybe seven, as long we’re counting Jamaican Indian Americans as “African American”: a mayor, some representatives and a member of Obama’s administration who’d never run for office.

Whatever Harris’ selection represents, it’s not a triumph. Harris didn’t swim fastest, climb highest, run farthest. (She didn’t even pass the bar exam on her first try, a failure she shares with the other most-admired liberal women, Hillary Clinton and Michelle Obama.)

The fix was in. Biden announced an extremely limited set of qualifications that only Harris had.

But liberals are standing in their kitchens sobbing about Kamala’s “historic” achievement. The dream, so long deferred, has finally been attained!

Trying to force the facts to fit the frenzy, Harris’ every utterance is treated as incandescent brilliance. The New York Times was still swooning over this incomprehensible remark Harris made to the paper last summer:

“Policy has to be relevant. That’s my guiding principle: Is it relevant? Not, ‘Is it a beautiful sonnet?’”

Confused, I submitted that quote to WokeTranslate.com and got this response:

We analyzed your selected phrase from: [KAMALA HARRIS] using our proprietary SayWhat software, and it translated as:

“OK look, I am one-trillion percent an empty suit, surviving entirely on identity politics and media complicity. So when I burp anything whatsoever out my cackling pie-hole, it’s vital you not only pretend I’m making sense but making history.”

Please let us know if we can be of further assistance.

We’re supposed to treat this privileged woman living the life of Riley like she’s the reincarnation of James Meredith. Yes, the daughter of a professor and surgeon rose through the Berkeley, California, school system in the 1970s, then moved with her cancer researcher mother to Montreal.

Congratulations to Harris, but please stop gaslighting us with claims that she has achieved something amazing, stupendous, historic.

We’re not gushing about Jared, either.