With that kumbayah moment at the Capitol in South Carolina, when the Battle Flag of the Confederacy was lowered forever to the cheers and tears of all, a purgation of the detestable relics of evil that permeate American public life began.

City leaders in Memphis plan to dig up the body of Confederate General Nathan Bedford Forrest, who is buried in a city park that once bore his name. A statue of the great cavalrymen will be removed. 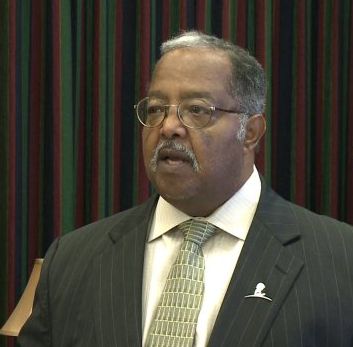 "Nathan Bedford Forrest is a symbol of bigotry and racism, and those symbols have no place on public property," said council chairman Myron Lowery (right)"What we're doing here in Memphis is no different from what's happening across the country." Myron's got that right.

Panicky Democrats are terminating their tradition of Jefferson-Jackson Day dinners, as both presidents were slaveholders.

Other slaveholders include Presidents George Washington, James Madison, who authored the Constitution that equated slaves with 3/5ths of a person, James Monroe, of Monroe Doctrine fame, John Tyler, who annexed Texas, and James K. Polk, who tore off half of Mexico.

Jefferson, Jackson and Madison are also the names of the state capitals of Missouri, Mississippi and Wisconsin, and Washington is the capital of the United States. Is it not time to change the names of these cities to honor more women and minorities who better reflect our glorious new diversity?

Washington, Jefferson and Jackson are on the $1, $2 and $20 bills. Ought they not all be replaced?

In Baltimore and Annapolis, calls are heard for the removal of statues of Chief Justice Roger Taney of the Dred Scott decision. In Fairfax County, Virginia, J.E.B. Stuart High may be headed for a name change. Can George Washington and Washington-Lee, rivals of my old high school, be far behind?

But it is Statuary Hall, beneath the cupola of the U.S. Capitol, where each state is represented by statues of two of its greatest, that really requires a Memphis-style moral cleansing. 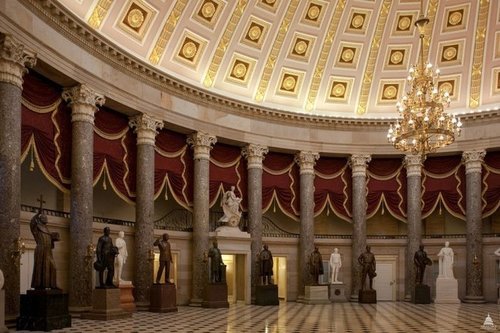 Mississippi is represented by Jefferson Davis and Georgia by Alexander Stephens, the president and vice president of the Confederacy; South Carolina by John C. Calhoun, who called slavery a "positive good," and Confederate Gen. Wade Hampton.

Kentucky is represented by slave owner Henry Clay; Florida by Confederate Gen. Edmund Kirby Smith; North Carolina by Confederate colonel and Civil War governor Zebulon Vance; Texas by Stephen Austin and Sam Houston who seceded from Mexico to create a slave republic that joined the United States as a slave state in 1845.

Utah is represented by Brigham Young, founder of a Mormon faith that declared black people unfit to belong; Virginia by Robert E. Lee and Washington. California is represented by a statue of Fr. Junipero Serra, who established the missions that became the cities of California and converted and disciplined pagan Indians to Christianity.

Among the men revered by the generations that grew up in mid-20th-century America, five categories seem destined for execration:

Explorers like Columbus who conquered the indigenous peoples. Slave owners from 1619 to 1865. Statesmen, military leaders, and all associated with the Confederacy. All involved in the dispossession and ethnic cleansing of Native-Americans, like Gens. William Sherman and Phil Sheridan who said, "The only good Indian is a dead Indian," and acted on that maxim.

Lastly, segregationists. There is a move afoot to take the name of Sen. Richard Russell of Georgia, an opponent of civil rights laws, off the Senate Office Building to which it has been affixed for 40 years.

As there are thousands of schools, streets, highways, buildings, towns and cities that bear the names of these old heroes and men like them, the purging is going to take decades. Yet, make no mistake, a Great Purge of American heroes of yesteryear is at hand.

What did all those named above, who would be Class-A war criminals at the Southern Poverty Law Center, have in common?

All were white males. All achieved greatly. All believed that the people whence they came were superior and possessed of a superior faith, Christianity, and hence fit to rule what Rudyard Kipling called the "lesser breeds without the Law."

Acting on a belief in their racial, religious and cultural superiority, they created the greatest nation on earth. And people who got in their way were shoved aside, subjugated, repressed and ruled.

As for the Confederates of the Lost Cause, they yielded to superior force only after four years of fighting, but their battle flag has ever after been seen as a banner of rebellion, bravery and defiance.

And those tearing down the battle flags, and dumping over the monuments and statues, and sandblasting the names off buildings and schools, what have they ever accomplished?

They inherited the America these men built, but are ashamed at how it was built. And now they watch paralyzed as the peoples of the Third World, whom their grandfathers ruled, come to dispossess them of the patrimony for which they feel so guilty.

The new barbarians will make short work of them.