See also: Is Antifa A "Spiteful Mutation"? Are We Headed To A "Mouse Utopia" Collapse?

Dr. Ed Dutton is hardly the first person to notice the similarities between feminists and witches: it is a favorite theme of feminists themselves. There is even an entire Wikipedia article devoted to “Feminist Interpretations of the Early Modern Witch trials.” But Dutton’s new book Witches, Feminism and the Fall of the West is probably the first study to bring the best in evolutionary theory to bear on the question.

Historically, witch trials were characteristic not of the Middle Ages but of the Early Modern era, peaking in the seventeenth century: a circumstance often perceived as ironic in view of the simultaneous rise of modern rationalism. 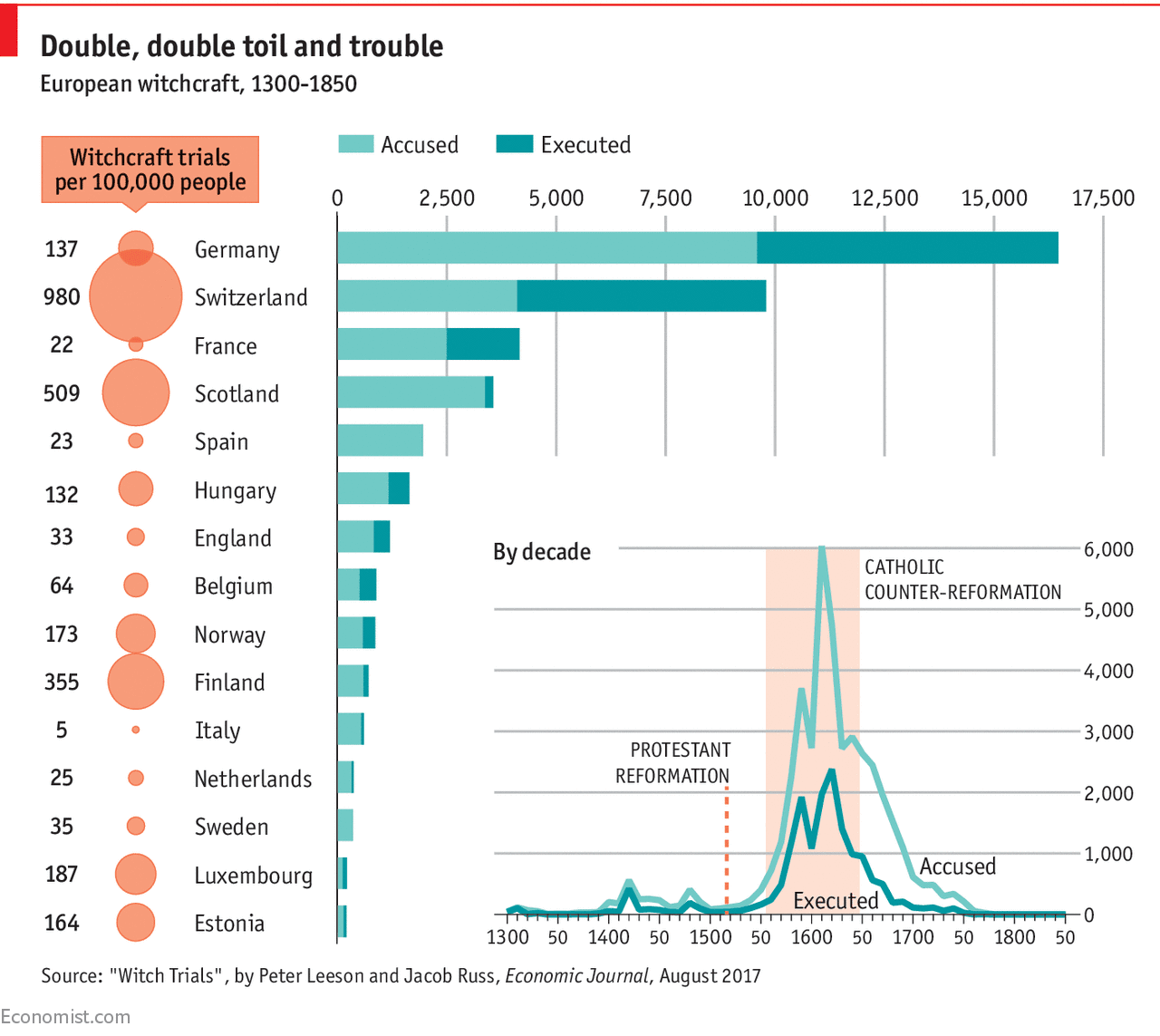 The political economy of witchcraft, The Economist, October 31, 2017

But there is both a climatic and an evolutionary explanation for this timing.

At the beginning of the Medieval Warm period, about 900 AD, Europe was in a chaotic state and thinly populated. For the next four hundred years, mild weather allowed rapid demographic increase and relaxed Darwinian selection. By the Late Middle Ages, however, and intensifying in the Early Modern Era, a more densely populated Europe experienced what climatologists call the Little Ice Age, meaning Europeans were forced to compete over scarcer resources.

Under such conditions, success went to groups which were internally cooperative, fought valiantly against hostile outsiders, and procreated most successfully. Religion acted to reinforce such adaptive behaviors by identifying them with the will of God. Society became far less tolerant of behavior and belief which did not contribute to group fitness, such as homosexuality and religious heresies.

“Patriarchy,” that bugbear of feminism, is especially favored under harsh conditions of group selection—not because it benefits men at the expense of women, but because it ensures procreation and investment in offspring, as well as promoting social peace. Dutton explains:

Groups were more likely to be internally cooperative if females were under male control. Males could be more certain that they weren’t being cuckolded. This would reduce the need to invest energy in mate-guarding and lessen inter-male conflict, thus elevating the cooperativeness necessary to win the battle of group selection.

This, Dutton argues, is why successful societies have never recognized any female “right” to do as they please sexually. The patriarchal system also developed in part because women in colder climates (such as Europe) have evolved to demand paternal investment in return for sexual access. Patriarchy thus allows both sexes to get part of what they want, encourages young motherhood and large families, and raises fitness.

Witch hunting, irrational as it may appear, is no random phenomenon. Abundant evidence makes clear that a specific sort of woman was most likely to be accused: a childless spinster living apart from men, usually older and physically unattractive (according to popular belief, witches might be identified by “witch’s marks,” physical deformities by which Satan marked them for his own). Most were ill-tempered, unpleasant, and lived on the margins of society. And yes, some did indeed practice superstitious arts disapproved by the Church, such as magical healing or casting curses upon their neighbors.

Such women, like homosexuals and heretics, tended to weaken rather than strengthen group fitness. This is broadly true even of unattractive women, because they are usually high in mutational load. Since 84 percent of our genes relate to the brain, any woman whose physical appearance indicates unfavorable mutations is likely to have such mutations affecting her behavior as well: personality disorders, mental illnesses, not wanting children, etc.

Of course, one might observe that life is hard enough on homely women without adding in accusations of witchcraft: but evolution is sublimely unconcerned about fairness to individuals.

The true cause of the witch craze, then, was heightened group selection under conditions of scarcity. Note that convictions for witchcraft peaked around the 1640s, as the Little Ice Age entered its harshest phase. Within Great Britain, convictions for witchcraft were most common in Scotland, perhaps due to the country’s poverty and colder climate.

What, then, is the evidence that feminists are a modern equivalent of witches?

Again, we must begin by looking at the evolutionary background. Around 1800, childhood mortality began sinking from 50 percent to below one percent, while people also began living longer. Declining mortality salience meant declining stress levels, which led in turn to a decline in religiosity (for religion is in part a means of coping with stress). Lowered child mortality meant that persons with high mutational load were not eliminated from the gene pool, so levels of serious physical and psychological disorders began to increase.

Intelligence also began to decline: Dutton estimates that late Victorians had an average IQ about 15 points higher than ours. This growing body of people high in mutational load was far less group-selected than their pre-industrial ancestors, more prone to individualism, and more likely to espouse ideas damaging to group fitness.

The effects of the decline in group selection can be illuminated by moral foundations theory, best known through Jonathan Haidt’s 2019 book The Righteous Mind. Haidt distinguishes five moral foundations, or dimensions of moral reasoning: 1) care/harm; 2) fairness/cheating (including concern for equality); 3) loyalty/betrayal; 4) authority/subversion; and 5) purity/degradation. These five foundations cluster in two larger groups: the latter three are binding moral foundations concerned with the strengthening of human groups, while the first two are individualizing foundations important for those focused on acquiring status within the group.

This suggests that the rise of liberalism in modern times has much to do with the weakening of group selection.

Whereas in the seventeenth century witches and other rebels against group norms were ordinarily found at the bottom of the social hierarchy, more recently, promoters of fitness-damaging ideas have mostly been Middle Class. This is a change for the worse, since higher status means more influence: harmful ideas spread more quickly and easily today than they used to.

As Dutton remarks, the Middle Classes

…hold a position in society that makes questioning the status quo attractive as a means of gaining status…The Middle Class has long played for status by emphasizing that, although they are not as wealthy and powerful as the upper class, they are morally and intellectually superior.

This was a major motivator for Puritanism: England’s Middle Classes were keen to view themselves as godlier than their traditional social superiors—and therefore as having a better title to rule. One cannot understand the English Revolution without grasping this mindset.

Puritan sanctimony was the seventeenth-century predecessor of today’s liberal virtue-signaling. It did not usually harm group fitness, however: individuals competed for status by demonstrating commitment to, not disdain for, group norms. A young woman might try to outcompete rivals, e.g., by signaling to suitors that she accepted the constraints of patriarchy; in other words, that she was “the kind of girl one marries.” In an age of collapsing group selection, she is more likely to turn to Cosmo for tips on using makeup seductively.

Today’s Middle-Class signaling behavior is still about competing for status, but the ideals espoused have shifted toward harming group fitness. As an extreme case, Dutton cites “Extinction Rebellion,” a group that campaigns for “climate justice”:

According to reports, Extinction Rebellion is conspicuously “Middle Class.” The popularity of such maladaptive thinking with the Middle Class may be related to their higher intelligence, since the intelligent are better at talking themselves into accepting exotic and implausible ideas.

Feminism is another fitness-damaging way of thought made possible by the collapse of group selection. It deliberately undermines the patriarchal norms that helped our ancestors win the battle of group selection. Like seventeenth-century witches, feminists tend to be childless spinsters: now they are zealots for unrestricted abortion as well. Also like witches, they are disproportionally homely, particularly in a masculinized direction. Having higher than average mutational load, they are more likely to suffer from depression, narcissism, and other disorders which make them unpleasant to be around. The most committed feminists are lesbian to a wildly disproportionate degree: Dutton reports that

45 percent of self-identified feminists in a U.S. sample claimed to be non-heterosexual and predominantly homosexual . . . despite the fact that only about 0.7 percent of Western females identify as ‘lesbian.’

An important example: the academy, where the increasingly female atmosphere has brought with it a greater concern with consensus and collegiality. Since scientific and other intellectual breakthroughs always threaten these things that women value, we should not expect to find in the new feminized university a hotbed of bold, original thinking. Indeed, universities seem to be losing interest in the pursuit of truth as such and busying themselves instead with the upholding of public orthodoxies such as egalitarianism, multiculturalism—and feminism itself.

But the most important effect of neo-matriarchy is one of special interest to VDARE.com readers:

Females score considerably lower, on average, on measures of negative ethnocentrism than do males, likely because of their high levels of generalized empathy. It would follow that the empowerment of females, such as permitting them to vote or work in high-status and influential professions, would push society in a less negatively ethnocentric direction (that is, make it less hostile to outsiders).

Feminism has thus contributed to the fostering of replacement-level immigration to Western countries by outsiders who may themselves be extremely hostile both to Europeans generally and to unpatriarchal women in particular.

When Angela Merkel (who is childless) opened Germany’s borders in 2015, it was women who showed up at entry-points with “Refugees Welcome” signs.

Their extreme individualism and misplaced empathy are serving to usher in an era of group conflict in which their own interests will count for little.

As Dutton puts it:

Feminism creates a new “Crucible of Evolution” by spreading dysphoria and brainwashing people to behave maladaptively. Only the carriers of genes that are resistant to this, which is, in part, extreme conservatives and the extremely religious, survive: the anti-feminists will inherit the Earth . . . eventually.

But will those anti-feminists be sons of a surviving West—or the followers of Muhammad?