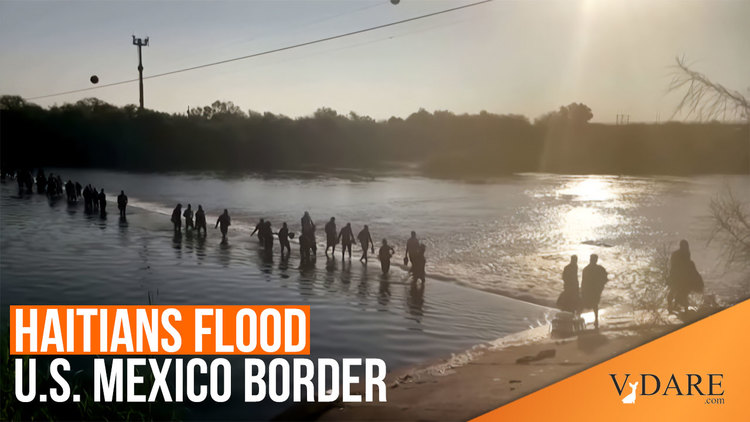 NYT: There's More Haitians Where These Came from

Thousands of Haitians Are Being Allowed Into the U.S. But What Comes Next?

Members of a Haitian church in Philadelphia opened their hearts and pocketbooks to sponsor a family of immigrants. Then came another, and another.

HAMILTON TOWNSHIP, N.J. — In early May, Rooldy Alexandre, a Haitian American pastor, answered a late-night call from a man speaking Creole who identified himself as Josue Alexis and said he had been following Mr. Alexandre’s sermons online. “Pastor, I just crossed the border with my pregnant wife and young child,” the man said. “Can you help?”

They needed someone to receive them in the United States.

“As a pastor, I am used to calls from people in need. It was the first time I received a call from the border,” Mr. Alexandre, 53, said. “I just had to act.” He agreed to buy them plane tickets.

Beersheba Adventist Church in Philadelphia is now supporting nine Haitians who have crossed the southwestern border in recent months, including Mr. Alexis and his family. They are living in a three-story clapboard house about 20 miles away in New Jersey, their rent, food and supplies paid for by 120 Haitian congregants who are pooling their money until the families can become self-sufficient.

…Thousands more — mainly families with young children, or vulnerable pregnant women — have been allowed to stay, often because they could, like Mr. Alexis, produce evidence of a friend or relative who could help provide a foothold.

After all, who is more likely to pay more in taxes than they take out in services than families with young children or vulnerable pregnant women?

The highly publicized crush of Haitians this month underscores the continuing difficulty of deterring mass migration on the southwestern border, even with an arsenal of measures designed to slow the arrival of migrants during a pandemic. It also shows the degree to which early generations of immigrants continue to pave the way for others who come later, in a pattern that is as old as the nation itself.

Haitian chain migrants are who we are.

By 2015, two of his older sisters had emigrated, one to Brazil and the other to Chile. After arriving in Santiago [capital of Chile] in 2016, he found a job in a chemicals lab and, on the side, played soccer for a semiprofessional team. The following year, he married a fellow Haitian, Antoinette Peroux, who worked as a cashier at a Burger King. Antonio was born in 2018.

They managed, the couple said, but it was difficult to obtain legal permanent residency in Chile; immigrants without status were exploited and paid low salaries. Ms. Peroux was passed over for promotions because she was not Chilean, she said.

In 2020, the couple was paying close attention to the Democratic presidential candidate, Joseph R. Biden Jr. He promised to restore the possibility of asylum for people persecuted in their own countries and to be kinder toward immigrants than the incumbent he was running against, Donald J. Trump.

“I decided that Chile was a first step,” Mr. Alexis said. “To really advance, we needed to reach the United States.”

He and his wife gathered about $5,000 and began the trek to North America, by foot and by bus, sometimes paying smugglers to guide them along remote, perilous trails. …

When Mr. Biden was elected, the family celebrated at a refugee camp in Panama, where they had been waiting for Costa Rica to ease Covid-related border restrictions.

It was there that they befriended Julien Cheridor, 53, a Haitian accountant who had also decided to leave Chile. He told Mr. Alexis about a pastor in Pennsylvania whom he had known in his youth, and Mr. Alexis began listening to his sermons.

“The words of the pastor inspired me,” Mr. Alexis said. …

They crossed on May 6 into Arizona, where they and other migrants were quickly apprehended and loaded into a Border Patrol van that ferried them to a station for processing.

From there, they were bused to a facility in Phoenix, where they were tested for Covid-19 and told to contact relatives to book tickets to their destination. Mr. Alexis tried to reach an uncle in Boston; he didn’t answer.

Fearing they were running out of time, he thought of Mr. Alexandre.

After buying their plane tickets, the pastor called an emergency meeting of the church board to discuss next steps. …

On May 10, Antonio’s third birthday, the family moved into a large room on the first floor of the big house. Twelve days later, they had a stroke of extraordinarily good fortune: The Biden administration announced that it was extending temporary protected status to Haitians who had arrived in the United States on or before May 21, allowing them to live and work in the country without fear of deportation in recognition of the hardships that existed in their homeland. ..

Less than a month after the Alexis family settled into the house in New Jersey, on June 3, Mr. Alexandre received a text from a migrant hotel in El Paso. “Your family has arrived. Please book their tickets,” it said. He was incredulous.

He called the number, and the phone was passed to Mr. Cheridor, the man who had initially told Mr. Alexis about Mr. Alexandre. Mr. Cheridor had just made it across the border, and reminded the pastor that they had attended the same church in Haiti decades ago. The pastor remembered him.

In addition to asking for airfare and accommodation for himself, Mr. Cheridor had another favor to ask. Could the church help a mother and daughter he had met along the way? …

Then in late July, Mr. Alexis called the pastor again. This time, it was his sister, Marie, who had crossed the border with her husband and toddler. She did not need help with airfare. But could the church let her family stay at the house?

… “The church is doing whatever we can to support our compatriots,” he said.