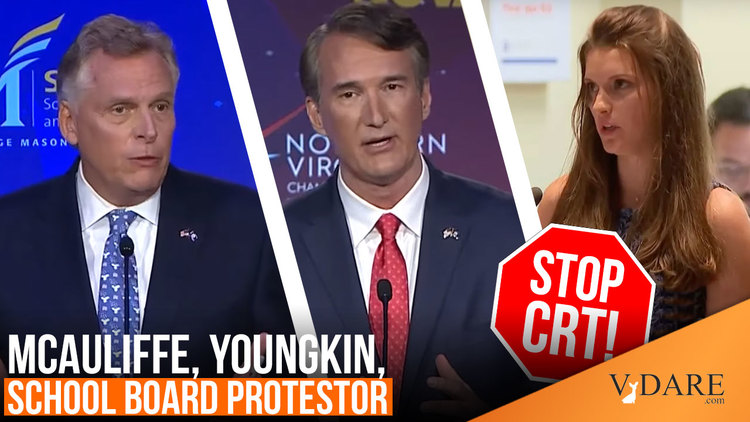 Despite Media Hysteria, Youngkin Cucks On CRT In VA Governor’s Race. It Might Work For Him—But Not For America

I’ve long been pessimistic about the Political Correctness–whipped whites in suburban northern Virginia, where I live, and I was delighted by 2021’s grassroots backlash against the imposition of anti-white Critical Race Theory (CRT) in the area’s public schools. I predicted, however, that the Virginia GOP/GAP would be too cowardly to touch the issue and I was right: it only briefly came up in September 15’s first gubernatorial debate between Democrat retread Terry McAuliffe, assassin of the 2015 Charlottesville UTR rally, and cuckservative Wall Streeter Glenn Youngkin, and not at all in the second and final debate on September 28 [C-Span Video And Transcript, September 28, 2021]. But note that, despite much patriot demographic despair about Virginia, just not being a Democrat has apparently been enough to get Youngkin surprisingly close in opinion polls [Uh, Maybe Democrats Should Start Paying Attention to the Virginia Governor’s Race, by Jim Newell, Slate, September 28, 2021].

Of course, Youngkin’s cowardice didn’t stop Jeff Bezos’ Washington Post from projecting its own obsession with identity politics in a typically hysterical editorial condemning him for his supposed use of anti-white CRT as a “dog-whistle” (a.k.a. by definition, an inaudible appeal). Claiming CRT doesn’t exist (see here, here and here for just a few examples of it), WaPo writers insisted:

There’s little mystery about what impels Mr. Youngkin’s false statements, which dovetail with national Republicans’ strategy of using the critical race theory bogeyman to foment racial resentments among the GOP’s heavily White voting base. In his race against Democrat Terry McAuliffe, Mr. Youngkin is testing the electoral efficacy of what was until recently an obscure term. Whether it works is an open question; what’s not in doubt is its divisiveness at a time when divisions already run deep

[Opinion: Youngkin is using the critical race theory bogeyman to rile up the Trumpian base, Editorial Board, September 25, 2021]

The Washington Post must be watching a different election than I am. Although there was some expectation even in the Corporate Media that CRT would be a major issue [Critical race theory to face first major political test in Virginia, Fox News, July 24, 2021], Youngkin gave a perfunctory answer when asked about it by the black moderator in the first debate:

Candace Burns: Mr. Youngkin, critical race theory, or CRT is a term that has been become controversial in school board meetings and calls confusion in terms of its definition. You have promised to ban CRT and in recent interviews, you have said quote, critical race theory has moved into all schools in Virginia. But you provided little proof for this claim. Virginia's learning standards do not mention critical race theory. And there is no statewide list of schools that teach CRT that would allow for an objective count. So how do you define critical race theory? And can you explain how you would ensure diversity, equity and inclusion in schools?

Glenn Youngkin: Thank you for this most important question. Critical race theory has been in our schools for quite a while. And in fact, the first instance I can find is actually during Terry's time as governor, where the Board of Education ran a training session. And in fact, had a module teaching critical race theory in the classroom. You go to the Board of Education website today, and one of the recommended books is the foundation of critical race theory in education. So, to think that is not in our schools is absolutely bogus. Now, the problem with critical race theory is that it teaches our children to actually view everything through a lens of re-embracing, in direct contravention to those immortal words of Dr. Martin Luther King who, who asked us to judge one another based on the content of our character, not the color of our skin. I want our children to thrive.

Democrats have won every statewide election in Virginia since 2009. The Great Replacement and the related shifting of formerly Republican suburbs in northern Virginia to the Democrats has taken its toll on Virginia’s GOP [ 2020 U.S. Census Results: The Changing Demographics Of Arlington, by Michael O’Connell, MSN.com, August 16, 2021]. But now CRT has galvanized suburban parents, with many risking their careers, safety and livelihoods by speaking out against anti-white racism and sexual perversion in schools. Polls show the issue could resonate with independents as well:

Morning Consult's polling showed those who identify as Independents have similar views as Republicans on CRT, with 31% expressing a somewhat unfavorable or very unfavorable (25%) view, and only 13% offering a very favorable or favorable view. Meanwhile, 18% said they heard of it but had no opinion and 36% said they had never heard of the controversial academic theory.

However, Youngkin barely mentions the CRT issue on his Twitter account and on his website. He lists banning CRT as part of his agenda but buries it as a third bullet under “Glenn’s Day One Game Plan” for “Restoring Excellence in Education.”

Youngkin also has no campaign ads on the issue. Indeed, one ridiculous Youngkin ad touts the 2015 killing of nine blacks by Dylann Roof in South Carolina as the kind of hatred “driving the rising crime here in Virginia.”

This ad will likely harm him as it was promptly and properly ratioed in the comments section with responses such as:

A recent poll shows that Virginia voters would favor a law that banned teaching of CRT in state schools by 47–36 percent [Virginia 2021: Competitive Governor's Race and Division Over Critical Race Theory, by Spencer Kimball, Emerson College Polling, September 16, 2021]. There is clearly room for Republicans to gain new votes on the issue. Will Youngkin start campaigning on CRT in his ads and fliers in the final weeks of the campaign?

My guess is he will not. He ducked a perfect opportunity in the final debate with McAuliffe when he was asked a question about how to teach about Virginia’s racial history.

Light relief: McAuliffe might have inadvertently provided the most hilarious line of the year when he proclaimed:

Terry McAuliffe: "Tonight, I have the leading conservative in America here, Bill Kristol, who has endorsed my campaign for governor." pic.twitter.com/N8e1eznV8D

Youngkin and his handlers must know there are votes to be had from supporting the growing anti-CRT movement. But his fliers and ads are filled with bland Republican talking points. His Twitter feed is full of pandering to blacks, Hispanics, gays, Asians and other non-white groups. For some reason, he cannot find time to meet with Virginia’s Sons of Confederate Veterans chapter to ask about their concerns.

That’s not to say he never targets whites. As CEO of The Carlyle Group, Youngkin sent a letter to his employees urging them to donate to anti-white outfits such as the Southern Poverty Law Center and the NAACP—two of the main boosters of CRT [Woke Capital? GOP Candidate, Ex-CEO Once Urged Employees To Donate To The SPLC, by Emily Jashinsky, The Federalist, March 25, 2021].

Similarly, in the first debate, Youngkin was asked about taking down the statue of Robert E. Lee in Richmond, which had only occurred a week prior:

Susan Page: Mr. Youngkin, what went through your mind when you saw the statue of Robert E. Lee come down?

Glenn Youngkin: What I thought was the statement I heard from Terry McAuliffe when he was governor that the statue of Robert E. Lee and Stonewall Jackson should be left alone. I felt the Supreme Court decision reflected the law locally that the decision was made to bring the statue down. That's where I believe these decisions should be made. I think that statue should be in a museum or on a battlefield so we don't airbrush away our history. If we don't know our history, we don't learn our history. we're destined to repeat it. And I think this is the brain this is a way to bring all Virginians together around a path forward as opposed to constantly looking back.

In other words, Youngkin is fine with the statue being taken down and will do nothing to prevent the desecration of the remaining statues and monuments of the people who created the state he wishes to lead. (Of course, his comment about it belonging in a museum or battlefield is at least better than what actually happened to the Lee statue. But is he actually proposing this?)

On immigration, Youngkin does not even oppose the settlement of Afghan "refugees" in Virginia, even though they have already started to harass and attack American female service members at the military bases where they are being housed. When asked if Virginia should welcome these refugees, he replied:

We need to make sure that we’re processing everyone who comes in. Have they had a COVID-19 vaccine? I think we should make sure that those that stood shoulder to shoulder with us are welcomed, that they’re processed appropriately, that they have a home in Virginia.

The Youngkin strategy centers around saying the bare minimum to satisfy conservative white voters and campaigning on these issues as little as possible while appealing to the perceived consensus. He is trying to please multiple constituencies at once. This is a timid and uninspiring strategy, but it is not irrational. It might actually work if Joe Biden is unpopular enough, which is why Democrats are worried. It cannot, however, create a new majority, as Reagan did in 1980, and Trump showed could be done in 2016.

The Real Clear Politics average has shown Youngkin behind by less than three points, although the gap seems recently to be widening. But this is pretty good for a state that Trump lost by ten points in 2020. The previous Republican nominee for governor, Establishment corporate lobbyist  Ed Gillespie, lost by nine points in 2017, even though the final polls had the race a toss-up. My personal sense: this will happen again.

If Youngkin is defeated, the loss will of course be proclaimed as a victory for CRT—and, by extension, for the Great Replacement. It will be seen, not least by GOP strategists, as a message to Republicans to tone down their opposition (however tepid) to anti-white indoctrination.

If Youngkin wins, of course, it will be portrayed as a victory for Cuckservative “moderation.”

But whatever happens on November 2, there is a massive opportunity for a Republican to take the lead on opposition to CRT and to speak up for beleaguered whites a.k.a. Americans on a litany of other issues.

Glenn Youngkin is clearly not that man. The crown is in the gutter.