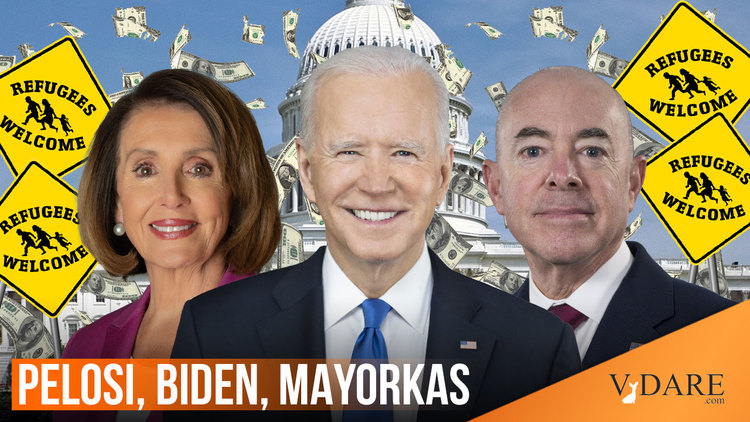 The battle over the infrastructure and budget bills is reaching a climax. The Senate Parliamentarian has ruled twice that Democrats cannot sneak an Amnesty into the budget bill, but Leftists still refuse to compromise. Moderate Democrats are growing more agitated because this intransigence threatens passage of their prized infrastructure bill. Perhaps as a fallback, Homeland Security Secretary Alejandro Mayorkas, in a recent memorandum to the Treason Lobby bureaucrats who now run immigration policy, all but stopped deportations of illegal aliens [Guidelines for the Enforcement of Civil immigration Law, ICE.gov, September 30, 2021]. This although another 60,000 Haitians are reportedly on their the way to the U.S.-Mexico border [Next border surge, by Stef W. Knight, Axios, September 30, 2021] and although DHS itself forecasts an absolutely mind-blowing fall [DHS fears up to 400,000 migrants - or DOUBLE the 21-year record set in July - could cross the border in October when COVID restrictions Trump used to stop the surge from Mexico end, report claims, Daily Mail, September 30, 2021]. It’s Amnesty by decree and Trump immigration advisor Stephen Miller has quite rightly urged impeachment.

GOP should immediately make clear that 1.) if they take the majority in the midterms they will defund the memo & reverse the executive abolition of ICE. 2.) they will initiate impeachment proceedings against any official involved in drafting/planning this nullification edict.

But the Biden Regime plows on. Is it misled by the echo chamber created by the increasingly radicalized corporate media?

The battle on Capitol Hill confuses most laymen. Two bills are before Congress. The first is the $1.2 trillion infrastructure bill. Ostensibly dedicated to infrastructure, it has bipartisan support despite its Leftist wish list that includes such as items as racial quotas in broadband access. It is a must-pass bill for moderate Democrats. This bill is going through the normal legislative process, and it requires a filibuster-proof majority to pass. The $3.5 trillion budget bill is a different beast. It’s going through the reconciliation, which requires a simple majority to pass the Senate. Leftists have larded it with a wish list including Amnesties and expanded green card access. It’s the preferred bill among party leftists, but moderates are leery due to its massive price tag and threat of greater taxes.

The budget bill primarily concerns VDARE.com and the Historic American Nation because of its immigration provisions. The good news: it appears unlikely to contain a major Amnesty. The Senate parliamentarian, Elizabeth MacDonough, has shot down both attempts to legalize illegal aliens. The first idea was to give amnesty to “DREAMers” (illegal aliens who came to the U.S. as minors), Temporary Protected Status holders, and “essential workers”—a dubious category that included anyone Democrats thought “necessary” to the economy. At least eight million illegals would have received a pathway to citizenship. But MacDonough said it had little to do with the budget and was a dramatic change to immigration policy. The second idea: to update the immigrant “registry” from 1972 to 2010. Any immigrant who has resided in the U.S. prior to the registry date could apply for a green card. Though that idea would likely leave out many of the illegals that Democrats want to give citizenship, it still amounted to a large-scale Amnesty. MacDonough turned that down, too.

Democrats’ last hope: to grant a certain number of illegal immigrants “parole” status that offers legal residency without citizenship. MacDonough could well rule against this idea as well [Senate Parliamentarian Rules Out Democrats’ Immigration Plan B, by Jordain Carney, The Hill, September 29, 2021].

It doesn’t appear that these violate the parliamentarian’s rules, at least as far as her current judgments go.

More bad news: Democrats might still ignore the parliamentarian and keep Amnesty in the bill. Their activist base and, of course, the Leftist Regime Media demand it [Ignore Senate parliamentarian on immigration reform, by The Editorial Board, Seattle Times, September 23, 2021]. Protesters have marched and blocked roads [Protesters demand Democrats 'override the parliamentarian' during immigration protest on Golden Gate Bridge, by Brigid Kennedy, The Week, September 30, 2021]. Still, this dramatic step appears unlikely because it would harm moderate Democrat support. West Virginia’s Joe Manchin, Arizona’s Kyrsten Sinema, and others are sticklers for rules and norms. Thus, they not only oppose overriding MacDonough but also resist ending the filibuster.

But I’m happy to report that the Treason Labby is not optimistic. They believe this is the last chance for Amnesty, presumably because they’re worried about the mid-terms, “It looks really bleak. It looks like it will require many years before it can gel again,” Illinois Rep. Jesús García told The Hill [Democrats grasping at straws on immigration, by Rafael Bernal and Rebecca Beitsch, The Hill, October 1, 2021].

That attitude might explain why the Biden Regime gave a de facto Amnesty to the majority of illegals with Mayorkas’ order last week, which blocked the deportation of just about anyone short of a convicted multiple murderer. That was always Biden’s unspoken policy; now it’s official.

The fact an individual is a removable noncitizen therefore should not alone be the basis of an enforcement action against them. We will use our discretion and focus our enforcement resources in a more targeted way. Justice and our country's well-being require it.

Obama’s Deferred Action for Childhood Arrivals was a somewhat similar move. The courts did strike down most of this executive amnesty [Supreme Court Tie Blocks Obama Immigration Plan, by Adam Liptak and Michael D. Shear, New York Times, June 23, 2016]. But Biden is even less concerned with judicial precedent than Obama. Consider his move to extend the WuFlu eviction moratorium that the courts explicitly said was unconstitutional [Supreme Court strikes down CDC eviction moratorium despite delta’s rise, by Robert Barnes, Rachel Siegel and Jonathan O'Connell, Washington Post, August 26, 2021]. Unlike Republicans, he’s willing to take great risks to satisfy his base. The base demands Amnesty, and the Biden Regime acted.

This fight also indicates how unconcerned Democrats are with their moderates, let alone Republicans. If he were Bill Clinton–style smart, Biden would push back against progressives and enforce immigration law aggressively to show he cares about passing bipartisan legislation. He would at least pretend to claim Amnesty would end illegal immigration. We all know it wouldn’t, but politicians are eager to be fooled. A disgraceful number of Republican squishes would vote for Amnesty if they were given any concessions at all over border security and enforcement.

But Democrats can’t even offer the bare minimum to give these squishes cover.

A new reality is that the MSM Megaphone encourages the Democrats’ worst tendencies. Consider its blaring messages:

All this moves Democrat leadership, who clearly favor the Jayapal-Ocasio-Cortez Axis of Treason. Both Biden and House Speaker Nancy Pelosi have worked to appease the Left at the expense of moderates. But again, that comes with a price. Moderates are threatening to scuttle the budget bill if nothing serious is changed. Even House Republicans are threatening to drop their support for the infrastructure bill if it’s tied to passage of the budget bill [Republicans Walk Back Support For Infrastructure Bill After Biden Ties It To Social Spending Package, by Andrew Solender, Forbes, October 1, 2021].

All this could doom the Democratic agenda. But party leaders don’t seem to care—because the MSM, which hate the mere mention of border control, lionize them as heroes for pushing hard-Left policies.

The way out: Republicans must pull the plug on the infrastructure bill. Let the Democrats know nothing passes until they abandon the Treason Lobby’s drive to replace and eradicate the Historic American Nation.