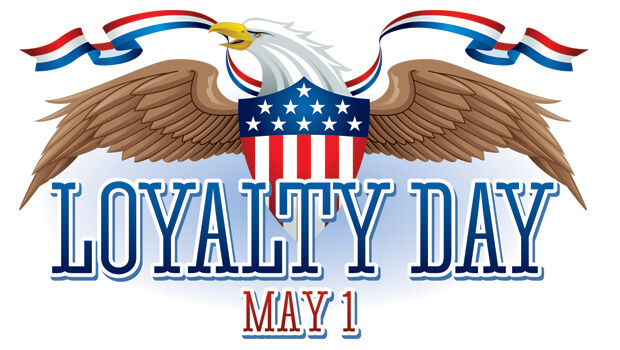 The Fulford File, By James Fulford | "In The Year Of Our Lord"…Independence Day And Loyalty Day

Possibly because, as I write this, it is still only the Third of July, I couldn't find on the Obama White House website a presidential proclamation on the subject of Independence Day. However, in addition to various housekeeping proclamations, and more conventionally patriotic fare, I did find these proclamations on the first two pages:

You can make up your own jokes here. Kamehameha was the name of the first King of Hawaii, as well as of the last one, and the three in between—the Hawaiians weren't very inventive as far as names are concerned. This proclamation honors the first one:

"Two hundred years ago, King Kamehameha the Great brought the Hawaiian Islands together under a unified government.  His courage and leadership earned him a legacy as the 'Napoleon of the Pacific,' and today his humanity is preserved in Ke Kanawai Mamalahoe, or 'the Law of the Splintered Paddle.'  This law protects civilians in times of war and remains enshrined in Hawaii's constitution as 'a unique and living symbol of the State's concern for public safety.'

"On this bicentennial King Kamehameha Day, we celebrate the history and heritage of the Aloha State, which has immeasurably enriched our national life and culture.  The Hawaiian narrative is one of both profound triumph and, sadly, deep injustice.  It is the story of Native Hawaiians oppressed by crippling disease, aborted treaties, and the eventual conquest of their sovereign kingdom.  These grim milestones remind us of an unjust time in our history, as well as the many pitfalls in our Nation's long and difficult journey to perfect itself.  Yet, through the peaks and valleys of our American story, Hawaii's steadfast sense of community and mutual support shows the progress that results when we are united in a spirit of limitless possibility." [link added.—JF]

Five minutes with Wikipedia will tell you that Kamehameha "brought the Hawaiian Islands together under a unified government" by the usual process of brutal conquest, not unmixed with treachery. The 1893 takeover by the US was much more civilized, but President Clinton insisted on apologizing for it in 1993. And apologies are still continuing under Obama, who was, we are assured, actually born in Hawaii.

But such apologies are typical of this administration. Obama did manage to proclaim Loyalty Day without apologizing for the Palmer Raids, the "Red Scare," or the Americanization campaigns of the early twentieth century:

However, in proclaiming Loyalty Day, Obama (or the speechwriter actually doing the writing) did manage to say, on the subject of the famous motto e pluribus unum, which represents the union of the Thirteen Colonies: "It became a cherished creed, representing the foundation of our national values.  As a union of States and a Nation of immigrants from every part of the world…"

Aargh. I promise you, the Founders meant Massachusetts joining with Virginia, et cetera, not, for example, mass Hmong immigration.

If you've never heard of Loyalty Day, you might look back at an old Sam Francis column, from when Bush proclaimed Loyalty Day in 2003

"'Loyalty Day' is not new and has been proclaimed for at least the last two years as well, but I confess I'd never heard of it until now. For me as with most other Americans, every day is Loyalty Day, but then, given mass immigration and political leaders who see nothing wrong in dragging this country into war on behalf of other countries, maybe there's a need for it. "

Bush's proclamation was just as bad, and didn't impress Sam at all:

"'To be an American is not a matter of blood or birth,' the First Citizen gushed.'Our citizens are bound by ideals that represent the hope of all mankind.  On Loyalty Day, we reaffirm our allegiance to our country and resolve to uphold the vision of our Forefathers.' Well, not quite."

Loyalty Day was an idea from the more confident and patriotic days of the 1930s and 1950s. Held on May 1st, it was intended to counterbalance the tendency of the wrong kind of immigrant to march on behalf of international communism on that day.

But in the Obama administration, no day is ever really Loyalty Day, and no day is ever Independence Day—none of them are loyal to America as she is now, much less as she used to be, and none of them really want the United States to remain sovereign and independent.

Even so, the President's proclamations continue to   be in the old form: "in the year of our Lord two thousand ten, and of the Independence of the United States of America the two hundred and thirty-fourth."

I keep expecting them to try and drop the words "in the year of our Lord".

And I hope that they never get to say "of the Independence of the United States of America the…last."