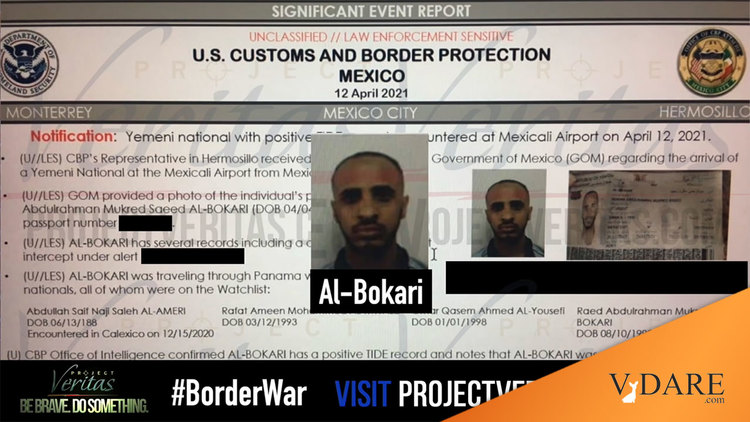 Project Veritas recently released a video based on content leaked from within Border Patrol, reporting that Al-Bokari, a suspected Yemeni Arab terrorist known to be in Mexico, had not been detained and deported by the Mexican authorities, and that the U.S. Border Patrol had caught him crossing the border.

But the phenomenon of potential terrorists attempting cross the southern border is not new—nor is the fact that the U.S. government has long appeared determined to cover it up (note that this story had to be leaked), under both Republican and Democrat presidents.

Thus earlier this month, Customs and Border Patrol announced two separate  apprehensions of Yemeni individuals on the Terrorist Watch List—only subsequently to scrub the announcement from its website without explanation [CBP Removes Press Release About Migrants on the U.S. Terror Watch List Who Crossed the Southern Border,  by Todd Bensman, The Investigative Project on Terrorism, April 7, 2021].

People have been worrying about the obvious logical possibility of terrorists coming across the Mexican border for a long time. It’s the plot of Stephen Hunter’s 1982 novel The Second Saladin: A Middle Eastern guy, hating on the US for Middle Eastern reasons, decides to go on a terrorist killing spree, and infiltrates the US through its vulnerable southern border.

Many terrorists are known, and the countries from which they come are also known—hence Trump’s “travel ban.” Presumably the immigration officers at JFK Airport would not admit an Arab who seems to be a terrorist. (”Purpose of Visit: Roaring Rampage Of Revenge.”)

But if Mexico has lower standards—and it does—an Arab can go to Mexico and walk north, mingling with the tens of thousands of Mexicans, and thousands  of “Other Than Mexicans” who cross the border every month.

In the years following 9/11, we made this point repeatedly:

But the federal government doesn’t want to tell Americans about Arab terrorist suspects arrested by the Border Patrol. Here’s a story from 2007:

Texas' top homeland security official said Wednesday that terrorists with ties to Hezbollah, Hamas and al-Qaida have been arrested crossing the Texas border with Mexico in recent years.

"Has there ever been anyone linked to terrorism arrested?" Texas Homeland Security Director Steve McCraw said in a speech to the North Texas Crime Commission. "Yes, there was" …

McCraw identified the most notable figure captured as Farida Goolam Mahomed Ahmed, who was arrested in July 2004 at the McAllen airport. She carried $7,300 in various currencies and a South African passport with pages missing. Federal officials later learned she waded across the Rio Grande.

(O)n Wednesday, McCraw described Ahmed as having ties to an insurgent group in Pakistan and whose specialty was smuggling Afghanis and other foreign nationals across the border.

McCraw also said that since March 2006, 347 people from what he called "terrorism-related countries" have been arrested crossing the border in Texas. The number of Iraqis captured at the border has tripled since last year, he said.

"A porous border without question is a national security threat," he said.

But as VDARE.com editor Peter Brimelow pointed out at the time in Shhh! Terrorists Arrested On Southern Border! this was immediately denied by official sources:

Leticia Zamarripa, a spokeswoman for Immigration and Customs Enforcement in El Paso, said Wednesday she was unaware of any border arrests of people with terrorist ties. An ICE spokeswoman in San Antonio did not return phone messages left by The Associated Press. U.S. Border Patrol spokesman Lloyd M. Easterling was unable to comment.

The rest of the story: the women mentioned by Texas Homeland Security Director McCraw, Farida Goolam Mahomed Ahmed [South African immigrant linked to terror group, by Jeremy Roebuck, TheMonitor.com, September 13, 2007], a Pakistani rather than any variety of South African, was caught attempting to board a plane in McAllen, TX. She was spotted by authorities because she hadn’t finished drying off after fording the Rio Grande.

"Among her possessions were a pair of wet blue jeans and muddy shoes scored with thorns, a border official said."

But eventually, the authorities decided she wasn’t a terrorist and deported her, after sentencing her to “time served” which was a matter of months. [S. African who sneaked into U.S. will be deported, Associated Press December 9, 2004] The New York Times called her an Immigrant Caught in a Terrorism Snare [by Ralph Blumenthal, August 7, 2004}.

Additionally, a 2006 post here ("Almost Made It" - Guantanamo Detainee Caught At Border) noted that one of the people in Guantanamo, a Pakistani named Feda Ahmed, hadn’t got there by being captured in Afghanistan, but by trying to enter the United States.

Via a now defunct blog by terrorism researcher Thomas Joscelyn, now with the Foundation For The Defense Of Democracies,  and confirmed by Federal documents here and here:

There is no indication of what the detainee was allegedly doing during the eight to ten months between his departure from Pakistan and his capture. But the government alleges that he traveled in a vessel that “is believed to be a special interest vessel, which was the focus of Operation Southern Watch.”

The detainee explains his travels thusly:

I did not take a boat from one country to another. I did take a small boat to cross rivers inside Mexico. I do not know all the countries I went to. I did take a plane from Pakistan to Guatemala. From there I traveled by foot and vehicle to Mexico.

The most intriguing aspect of the transcript concerns the allegations surrounding the smuggler responsible for getting the detainee across the border. The government alleges:

Guantanamo Detainee Caught At The Border, Thoughts on the Terror Network and Foreign Policy, April 27, 2006

Again, Feda Ahmed, no matter how suspicious he may have acted, was ruled by the authorities not to be an “enemy combatant,” and was released from Guantanamo. [Guantanamo Bay Detainees Classified as "No Longer Enemy Combatants", Washington Post, Archived from the original, February 4, 2007, retrieved today]

Apparently, like Farida Ahmed, he was just a thief, coming to American to steal a better life at the expense of American workers.

Let’s hope the Federal Government was right about this.

But here’s the point—the Federal Government actually caught this guy, who was certainly at least a suspected terrorist, crossing the border, but never announced it.

The only way we found out about it: the government mentioned it in the Guantanamo Tribunal proceedings, and Joscelyn read it in the documents.

The federal bureaucracy—should we call it the Deep State?—doesn’t want you to know about potential terrorists crossing the borders, because if you knew that, there might be pressure on them to actually Do Their Job and prevent illegal border crossings.

Rather than, as the Border Patrol now does under the Biden Regime, count them and ship them off into the country.

Ironically, actual Muslim terrorist, (and officially non-terrorist, as in “authorities can’t find a motive”) killers, have tended to be legal immigrants.

The 9/11 terrorists were in the country legally on non-immigrant visas. And the San Bernardino killers (below) were one “homegrown” killer and his Pakistani bride. 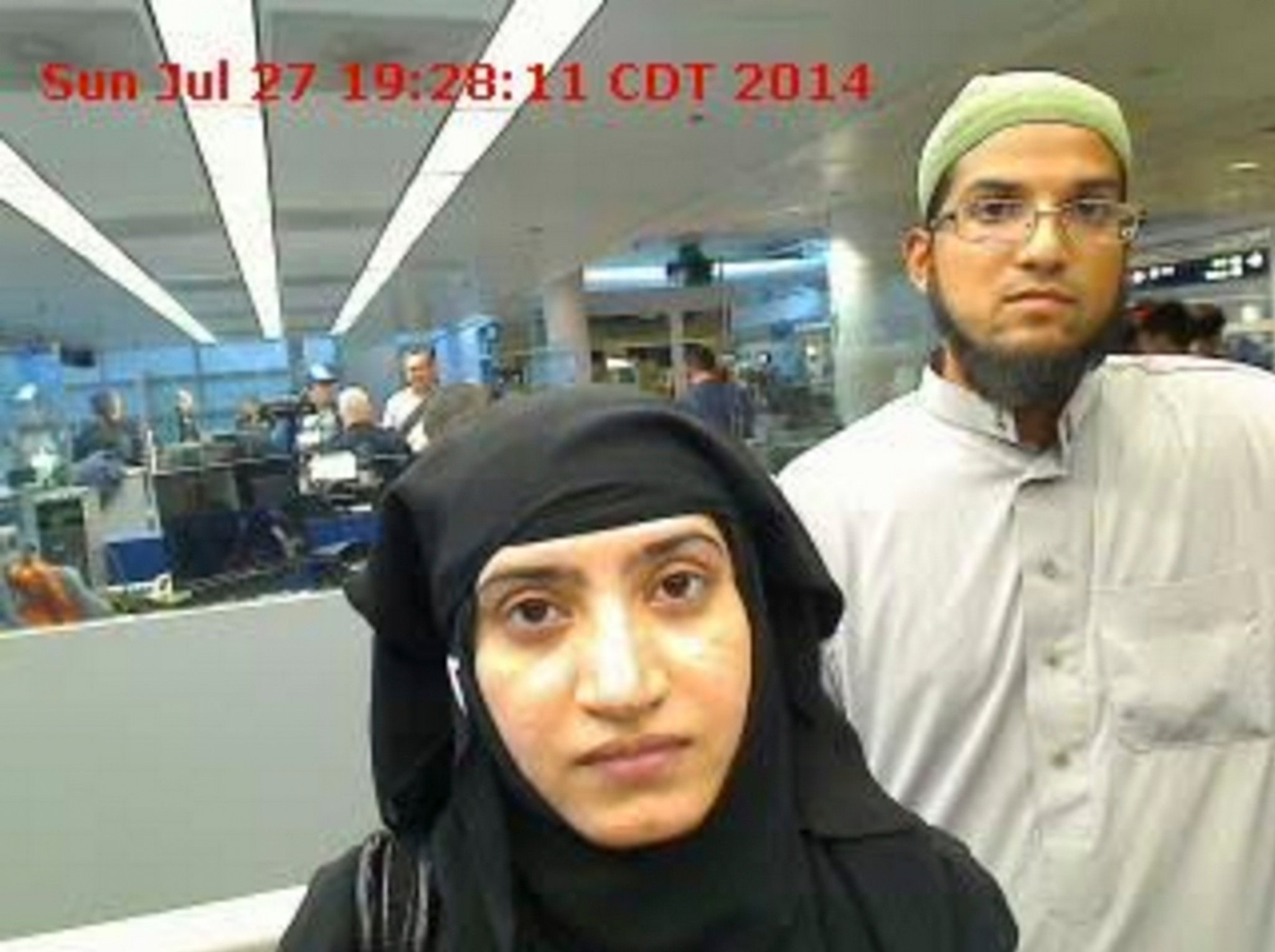 Not to mention Ahmad Al Aliwi Al-Issa, who just killed ten whites in Colorado and came here apparently legally, although as usual the Main Stream Media hasn’t bothered finding out quite how, after 9/11.