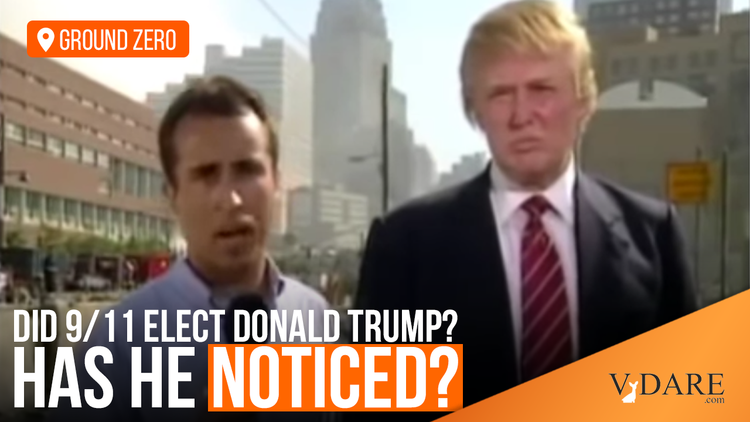 Did 9/11 Elect Donald Trump? Has He Noticed?

The same eerie feeling of complete change and no change comes over me when I contemplate the political consequences of 9/11....I find I don't feel like writing a VDARE.COM reflection on 9/11 this year. It's a game. America's elites didn't really care. They just got on with their agenda(s).

To be fair, Americans subsequently did elect Donald Trump in 2016. He hasn't started any new wars.  And he's making very un-neocon noises about withdrawing troops from the Middle East, meeting (why?) resistance from Congress [To Block Trump’s Troop Withdrawals, Congress Turns An Old Tactic Upside Down, by Katie Bo Williams, DefenseOne.com, July 14, 2020]. He even makes noises about immigration, albeit alas now mostly illegal immigration.

On September 11, 2001, 19 immigrants committed the worst mass murder in American history. They used a program called Visa Express (which let Saudis bypass normal visa applicant procedure) to get their visas.

The main point you need to remember about the September 11 attacks is that they didn't change anything about immigration policy. On October 16, 2001, Dr. Norm Matloff wrote us to say that

I found it interesting that so many of the writers were so sanguine over the prospect that the September 11 tragedy would facilitate long-overdue immigration reform. Though indeed the event did take the wind out of the pro-immigration camp's sails, I believe that this effect will be both temporary and of limited degree.

The fact is that it has always been the case that most Americans, including most immigrant Americans, have been in the restrictionist camp. The problem has been that the wishes of the populace have always been trumped by the special interests, such as:

The events of September 11 have not changed this picture. True, the various lobbies have been temporarily muted in public, and this probably will prevent them in the near term from pushing their plans to liberalize immigration policy. But they will strongly resist any attempt to impose new restrictions on immigration, and unless the restrictionist majority in the populace can be mobilized, very few meaningful restrictionist reforms will be enacted (via legislation in Congress) or implemented (via changes to regulations and administrative practices by the executive branch).

This was illustrated this week when Senator Feinstein withdrew her earlier proposal for a six-month moratorium on issuing visas to foreign students who wish to study in the U.S. After she first made her proposal a couple of weeks ago, the educational lobby—including not only universities and small colleges, but also many specialist institutions such as those offering English lessons—immediately pounced on her. She then withdrew the proposal. She then told a radio interviewer, in what I perceived to be a rather bitter, cynical tone, “These schools make lots of money from the foreign students, so I had to withdraw my proposal.”