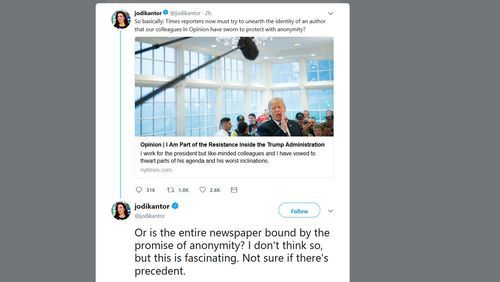 The NEW YORK TIMES And The Deep State—Anonymous Trump Official, If Real, Should Face Charges

This NYT Op-Ed, from an alleged anti-Trump mole high in the Trump Administration is frankly shocking:

In an anonymous Op-Ed, a senior Trump administration official says he and others are working ​to frustrate the president’s “misguided impulses.” https://t.co/qW1IoM3AYY pic.twitter.com/rCHnQfcRjG

If true, I'm sure that it violates security regulations, including stuff that violates secrecy law. But even without that, the idea that a US official is boasting about frustrating the President's policy goals is disgraceful, and shows us how far we've come.

The concept of the "Deep State" refers to permanent officials and members of the Establishment who simply ignore the results of elections. Said Establishment includes the New York Times, which of course never encourages any of this kind of Resistance to Leftist illegality.