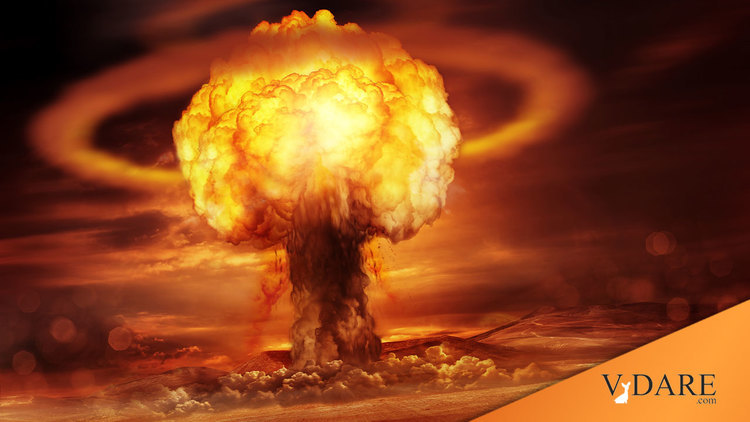 Another Time [!] Trap For Politicians: Who Let The Nuclear Bomb In?

In a recent column, I helpfully cautioned the Bush Administration or whatever powers that be (this was pre-election) that Americans will not tolerate another terrorist attack that could have been prevented by stricter border protections. I was responding to Donald L. Bartlett and James B. Steele's Time Magazine article Who left the door open?—a devastating account of how just many millions of aliens have slipped through our borders and illegally settled in the United States.

Mingled with those illegal millions were a shocking number of criminals—including violent felons who have a history of previous deportation followed by an immediate re-entry. (Click here for an example.) I said something about telling the government "We told you so." Ok, I really don't want to be in a position where I am able to say that.

But if the latest intelligence from Homeland Security is correct, al Qaeda terrorists are planning to smuggle nuclear weapons into the U.S. through the Mexico border. There may not be any of us left to say "I told you so." Side note: I've heard that the only living things left after a nuclear attack are cockroaches. So maybe I'll leave a note or something with them…"if you are reading this, my government has failed me and I am dead—so, dear cockroaches, carry the torch for me and say that I told them so."

Yes, vindication will be mine. Now there is a new Time Magazine story. (How come Time has become so rational all of a sudden? Could it be teasing us?) It's a story about an Egyptian terrorist named Sharif al-Masri. He was captured last August near the proverbial Bermuda triangle that some would call Pakistan's border with Iran and Afghanistan. (Frankly, all the 'stans make me nervous.)

Masri told his interrogators about "al-Qaeda's interest in moving nuclear materials from Europe to either the U.S. or Mexico." [Bordering On Nukes? By Adam Zagorin November 22, 2004] Hmm, why Mexico? Duh! Masri explained that al-Qaeda plan was "[to] smuggle nuclear materials to Mexico, then operatives would carry material into the U.S." What a monumental moment. Unlike the, shall we say, faulty CIA reports that launched a war with Iraq, we have here a real witness. We have a first hand account, from an al-Queda operative, of the precise movements and objectives of a real life terrorist group.

Time goes on to mention that other al-Queda detainees have revealed plans to use Mexico "as a staging area to acquire end-stage chemical, biological, radiological and nuclear material." And Time reports one more possible threat.

"And another episode has some senior U.S. officials worried: the theft of a crop-duster aircraft south of San Diego, apparently by three men from southern Mexico who assaulted a watchman and then flew off in a southerly direction."

Let's look at this from the perspective of political strategy via deductive reasoning.

1. The Bush Administration invaded Iraq based on the intelligence reports provided by the CIA and still justified their position when that information proved erroneous.

2. President Bush lost a little well, credibility, with that one.

3. Now, the Bush Administration has real witnesses who are providing legitimate evidence of a planned terrorist attack.

4. Preventing this new attack would provide the Bush Administration with at least one mark in the "win" column.

So what are President Bush and the DHS going to do about the threat from Mexico? According to Time, pretty much nothing:

"U.S. officials have begun to keep a closer eye on heavy-truck traffic across the border. The Mexicans will also focus on flight schools and aviation facilities on their side of the frontier."

DHS under-secretary Asa Hutchinson made a very brave appearance Tuesday night on Fox News' The O'Reilly Factor. Why brave? Bill O'Reilly has been one of the only Establishment media figures to push the tough questions about immigration reform. (In the interest of full disclosure, Bill O'Reilly is on the same list as Andrew Jackson and George Custer for my all-time favorite men.) The conversation started out pleasant enough. But O'Reilly had to ask Hutchinson the same, simple question twice before he got a garbled answer and O'Reilly grew somewhat impatient. (This is paraphrased a bit because the actual transcripts are not yet available.)

O'Reilly: We have tons of marijuana coming across the border, I use marijuana because it is smuggled in large bundles, and if we can't stop that (with the methods we use now) how are we going to stop something like a small nuclear warhead? [later] You can understand why we are worried.

Hutchinson: We have been aware for some time that al-Queda would like to exploit our borders. [later] There is not a fool-proof system.

O'Reilly: You didn't answer my question. What can be done?

Hutchinson: The strategy we have is appropriate for the threat.

Ok, I have good news and bad news. The good news: a definite tendency for the Establishment media to begin to put pressure on the Bush administration to do something, anything, to seal our borders. The bad news: a new rumor that Tom Ridge is stepping down as DHS director. Well, that's not so bad—but Asa Hutchinson, with his long history of fighting to keep our borders open, may be the new director. Last time we lost several thousand lives. This time it may be several hundred thousand lives. I am going to write my good-bye letter to the cockroaches…just in case.