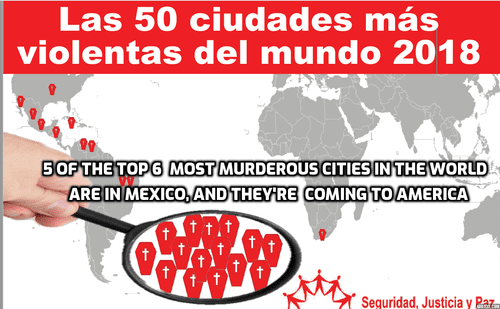 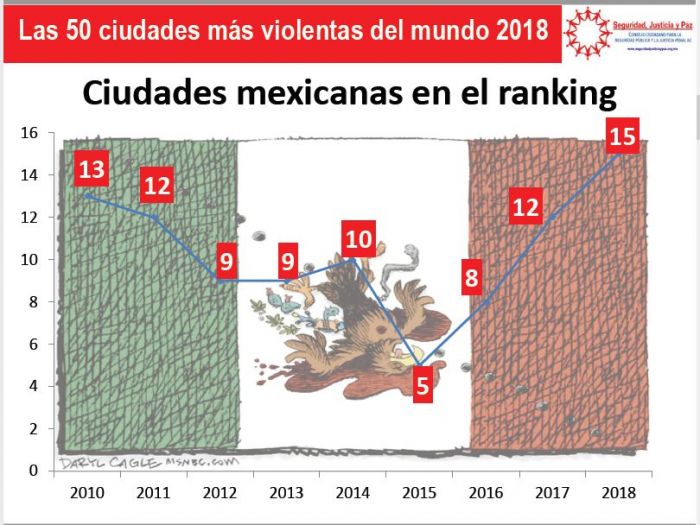 President Trump once famously said that “when Mexico sends its people, they're not sending their best.” That means a lot, because a new report shows that five out of the top six of the most murderous cities in the world are in Mexico (as are 15 of the top 50). But funny thing: the same report shows that murder rates in Central America’s Northern Triangle are sharply DOWN. In other words, the “migrants” and “caravanners” now swamping our southern border are not fleeing a crisis of mounting violence, as they claim: they’re coming for jobs and benefits. And they should be stopped.

Bad as that nationwide figure looks, it’s even worse when you tease the data, as Mexico’s Consejo Ciudadano para la Seguridad Pública y la Justicia Penal  (CCSPJP—“Citizen Council for Public Security and Criminal Justice”) does annually with its list of the 50 Most Murderous Cities In The World [Methodology of the 2018 Ranking of the 50 Most Violent Cities in the World, March 12, 2019]. A graphic summary is here.

The CCSPJP NGO tracks murder data in every city on the planet with more than 300,000 inhabitants, then calculates a rate based on murders per 100,000. That’s a good way to sample murders in Mexico, given that 80.2 percent of Mexicans live in cities—contrary to the image that most live in rural adobe villages [CIA Factbook, 2019]. That figure, by the way, is quite close to the U.S., where 82.3 percent of the population are urban dwellers, the CIA reports.

But then Mexico had a "good" run, taking places four, five and six: Ciudad Victoria, Ciudad Juárez (across from El Paso) and Irapuato, respectively. 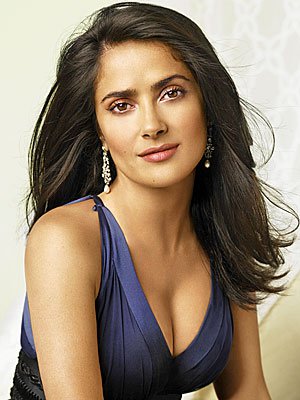 Overall, Mexico had 15 cities on the list, more than any other country:

Note that three of these Murder Metropolises—Tijuana, Reynosa, and Ciudad Juarez—are border towns, while Cancun is a tourist mecca. Tourism is an important source of revenue for Mexico, and the violence apparently hasn’t affected it yet:  In 2018, a record 41.4 million foreign tourists spent $20 billion in Mexico, increases of 5.5 and 6 percent over 2017. [International tourist numbers up 5.5% last year and they spent more Mexico News Daily, February 12, 2019]

The CCSPJP report notes that Mexico’s Salamanca and Chilpancingo would have been on the list—but each has fewer than 300,00 inhabitants.

And it provides some interesting analyses:

Three cities which were on the 2017 ranking were not on the 2018 ranking: Mazatlan, Los Cabos (in first place) and La Paz. Recall that Los Cabos and La Paz had never been on the ranking before and in 2017 they were high in the rankings [Los Cabos at No. 1 and La Paz at No. 6] due to the sudden increase in violence caused by the disputes between criminal gangs. In 2018 the murder rates of Los Cabos and La Paz plummeted, not thanks to any public policy, but to the simple fact that a criminal gang defeated its rivals and took away their plazas [the term plaza in this context referring to turf or a smuggling route or area].

[Methodology of the 2018 Ranking of the 50 Most Violent Cities in the World, Citizen Council for Public Security and Criminal Justice, March 12, 2019]. Emphasis added.

In other words, the police didn’t reduce the violence, a gang-war of attrition did. One gang prevailed.

Beyond Mexico, however, is more bad news. Of the world’s 50 most murderous cities, 47 are in the Western Hemisphere, with 42 in Latin America.

In second place to Mexico was Brazil, with 14 cities. That’s a decrease from 17 the previous year, when Brazil was No. 1. Still, 14 is a lot, so new Brazilian President Jair Bolsonaro has his work cut out for him.

Venezuela is in third place, with six cities.

South Africa, the only top 50 country not in the Western Hemisphere, had three cities, but then we return to the Americas and the Caribbean. Honduras and Colombia had two apiece, while Jamaica, Guatemala and El Salvador had one each.

All are majority black.

These numbers invite an obvious observation. The Treason Lobby claims that immigrants, even illegal aliens, commit fewer crimes than Americans. Data collection is suspiciously poor, as Ann Coulter memorably pointed out in Adios America, but the claim is certainly false at least for illegals [SCAAP Data Suggest Illegal Aliens Commit Crime at a Much Higher Rate Than Citizens and Lawful Immigrants, by Matt O'Brien, Spencer Raley and Casey Ryan, FAIR, Feb 3, 2019].

But even if it were true, and although the global murder data show that some American cities are indeed more dangerous than some in Mexico and Central America, why import more criminals?

And he CCSPJP report’s data on Central America raises  another interesting questions, given the coming massive demographic change because of the collapse of the U.S. southern border.

As of the end of February, CBP had apprehended 318,407 illegals and “inadmissibles” in fiscal 2019 [Southwest Border Migration FY 2019, CBP.gov]. Officials expect another 100,000 by the end of March. [CBP commissioner visits El Paso border, says immigration system at ‘breaking point,’ by Daniel Borunda and Aaron Martinez, March 27, 2019] Seventy percent of that 418,407 is 292,884 Central Americans crossing the border since October.

But look at the CCSPJP murder data:

In other words, while violence in Mexico is increasing, it’s decreasing in Central America, specifically the Northern Triangle, the origin of most illegal aliens nowadays.

What this means: most of the “migrants” and “caravanners” are not fleeing mounting violence. They are economic migrants. And 90 percent of asylum claims are phony. [A Border Security and Humanitarian Crisis, WhiteHouse.gov]

Thus there is no excuse for the twin policies of permitting dubious asylum claims, then releasing the claimants and watching them disappear. (Trump tried ending this, by the way, but Leftist lawfare stopped him: Federal Judge Blocks Trump’s Proclamation Targeting Some Asylum Seekers, by Miriam Jordan, The New York Times, November 20, 2018).

Now, look back at the numbers: A quarter-million Central Americans will have crossed the border by the end of the first six months of fiscal 2019.

The whole thing is a fraud. Trump should close the border—yesterday.