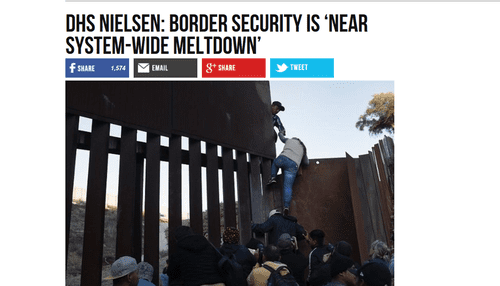 Lady DACA, Kirstjen Nielsen, the Secretary of the Department of Homeland Security (DHS), is decrying the sudden collapse in border security, a collapse that not only occurred on her watch, but because of her policies, her failure to advise the President on policies that would work, and her subservience to the kritarchy.  Was that her plan all along?  The border collapse began under her watch and went from bad to worse.

Border security is collapsing because the cartels and migrants are exploiting Congress’ refusal to close loopholes through the border, homeland secretary Kirstjen Nielsen said Monday morning.
“The situation at our Southern Border has gone from a crisis, to a national emergency, to a near system-wide meltdown,” Nielsen said at Auburn University’s Center for Cyber & Homeland Security.

No one is more responsible for this meltdown than Lady DACA.  From the beginning, she was more concerned with protecting DACA illegal aliens than enforcing immigration laws.  Under the Trump Administration illegal immigration initially declined, but once Lady DACA was ensconced in DHS, the situation reversed, enforcement collapsed under her, kritarchs ran amok, ICE SVU Special Agents-in-Charge openly mutinied against immigration enforcement, aliens smugglers enjoy immunity from arrest, and Caravans formed openly to rush the border.

The first Caravan Of Death To America By Demographic Displacement transited Mexico, and easily crossed the border, soon followed by more and more caravans.  And nothing was done by Lady DACA’s DHS.  More enforcement at the border has been done by Texas officials than the welcome wagon at DHS.

The Lady DACA engineered border melt down was not, as the kids say, a bug, but a feature.  Lady DACA could not have mistakenly arrived at this juncture, it was part of the plan.  Lady DACA has bragged about telling President Trump what he could not do, while in fact there is very little he can’t do to protect the border if his subordinates will do what they're told

One of the little addressed issues on the border crisis is that Mexico is the responsible party regarding illegal immigration in general and this current crisis of non-Mexicans zerg-rushing the border.  All the third-country illegal aliens either arrive in Mexico directly from all over the world, or transit Mexico from Central America.  The United States could easily stop this by holding Mexico responsible, and has done this before.  But Lady DACA has been sabotaging a strong and effective executive response by the United States by keeping President Trump in the dark concerning his options to end the border meltdown immediately.  Your correspondent outlined the easy effectiveness of executive action in general, and holding Mexico responsible specifically.   The key is the vulnerability of Mexico on the legal Mexican border crossers and the issuance of Non-Immigrant Visas (NIV).

Mexico’s border region is heavily dependent on access to the United States, for either legal border trade, tourism, and other lawful visits to the United States or the large number of Mexicans who live in the border area who use fraudulently obtained NIVs to work illegally on the American side of the border.  The United States has various options here to pressure Mexico to end access to the border by non-Mexicans.  First would be a border slowdown, as what happened when Mexico refused to extradite the murders of Drug Enforcement Agent Kiki Camarena.

I wrote about this in May:

Spelling out more consequences of allowing Third-Country nationals to traverse Mexico, either legally or illegally, should have been an easy call. Shutting down a land Port-Of Entry to Mexican nationals, or ordering U.S. Customs and Border Protection [CBP] to do a border slow-down, would have gotten Mexico’s attention, and, more importantly, action. This was actually done when Mexican officials were slow to find abducted DEA Special Agent Kiki Camarena. [Mexico drugs: How one DEA killing began a brutal war, By Will Grant BBC News, February 7, 2012] Or how about another Pershing-style Punitive Expedition?

[Fate Of Honduran Caravanners STILL Unclear, But Trump MUST Crack Down With Executive Options, by Federale, VDARE.com, May 17, 2018]

Other purely executive actions, unreviewable by the kritarchy, would be to temporarily shut down border Ports-of-Entry with Mexico, stop issuing NIVs to Mexican citizens and residents, canceling NIVs held by Mexicans for every non-Mexican national who illegally crosses the border or appears at a border post requesting asylum.  For example, cancel 10 NIVs held by Mexicans for each Guatemalan or African who crosses illegally.  This, among other executive actions, would get Mexico’s attention quickly, and cause Mexico to shut down the caravans and deport the third country nationals now causing a problem for Mexicans at the border.

Lady DACA has also refused to advise President Trump of his options on the border using the United States military.   The U.S. Army was for a hundred years the Border Patrol.  Deploying the military to the immediate border, including patrolling the Rio Grande to prevent illegal entry is a more costly option than cancelling Mexican visas, but effective, which is why Lady DACA will neither recommend or implement either option.  The State of Texas has already deployed naval forces to the Rio Grande, why is Lady DACA so hesitant to deploy riverine forces as well?  Because Lady DACA does not want to win.  Lady DACA is a saboteur.