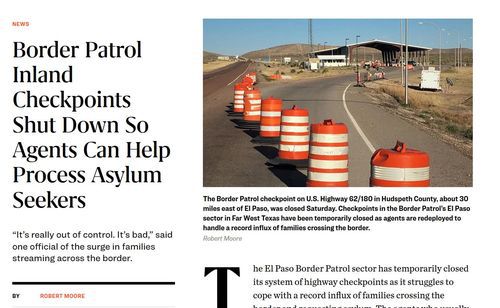 No wonder Latin American illegal aliens have such confidence.  They know the odds are in their favor.

From the Texas Monthly:

The El Paso Border Patrol sector has temporarily closed its system of highway checkpoints as it struggles to cope with a record influx of families crossing the border and requesting asylum. The agents who usually staff the checkpoints will be redeployed to process and transport the asylum seekers, according to multiple sources who spoke to Texas Monthly on the condition they not be identified because they aren’t authorized to speak publicly about the change. “We were told to go ahead and close down all the checkpoints,” one official said Saturday morning [March 23]. Agents assigned to checkpoints were told they would be sent indefinitely to assist in efforts to process and transport hundreds of families and unaccompanied children crossing the border each day in El Paso, a surge that is overwhelming available resources. “It’s really out of control. It’s bad,” the official said. A Border Patrol spokesman said the agency was preparing a statement on the checkpoint issue but as of Saturday evening the agency hadn’t responded to Texas Monthly inquiries.

So they shut down checkpoints and move the agents to where they can "process and transport the asylum seekers"?  Which in turn eliminates another safeguard against illegal entry to the interior of the United States.  Brilliant.

At a checkpoint on U.S. Highway 62/180 about 30 miles east of El Paso in Hudspeth County, orange cones that usually are used to funnel motorists off the highway and into the checkpoint had been repositioned Saturday evening to block the entrance to the checkpoint. The situation was repeated at several other checkpoints on major roadways in Far West Texas and Southern New Mexico, officials said. It wasn’t clear Saturday if checkpoints in other Border Patrol sectors across the Southwest were impacted by efforts to redeploy resources to deal directly with arriving migrants.

U.S. Representative Henry Cuellar, D-Laredo, confirmed reports of the checkpoints shutting down and said he is also receiving reports that  agents with Customs and Border Protection who usually inspect cross-border cargo and other trade are also being redeployed to help with asylum claims. “We’re seeing an impact on the traditional work Border Patrol and CBP do to handle the large number of asylum cases,” he said. He added that he is already looking at future appropriations to see if more incentive can be provided for Mexico and other Latin American countries to work more diligently to fend off the flow of migration from Central Americans.

That might work, Representative Cuellar, if Mexico would "work more diligently to fend off the flow of migration from Central Americans."  We can't count on that though.  As for the Central American countries, their governments are fine with their people leaving the country and sending back remittances.

The Border Patrol for decades has operated a series of checkpoints within 100 miles of the border, usually on major highways. Most motorists pass through after a cursory citizenship question, but agents occasionally pull motorists over for more in-depth questioning. The primary use of the checkpoints in recent years has been drug seizures.

The El Paso sector has been hit hard.

The Border Patrol’s El Paso sector—which includes El Paso and Hudspeth counties in Texas and all of New Mexico—and the Rio Grande Valley sector have borne the brunt of the record surge of asylum-seeking families, mostly from the Central American countries of Guatemala, Honduras and El Salvador. From October through February, El Paso sector Border Patrol agents processed 41,670 members of family units and unaccompanied children who crossed the border illegally, most of whom sought out and surrendered to agents. In the Rio Grande Valley, that number reached 69,623 in the first five months of the fiscal year. Crossings in March are on pace to well exceed the record numbers of February, Border Patrol officials have said.

El Paso Border Patrol officials have said they’ve been taking custody of almost 600 migrants a day or the past month, most walking across the Rio Grande in the city limits of El Paso, then walking toward the border fence that lies several hundred feet north of the international boundary, and waiting for Border Patrol agents to take them into custody. Because border detention facilities are past capacity and Immigration and Customs Enforcement has limited ability to hold families in detention, the migrants are processed, given a notice to appear in immigration court, then released to the nonprofit Annunciation House in El Paso while they make travel arrangements to join other family members in the interior of the United States.

We need to change our asylum system immediately.  That's actually more important than building a wall.

The migrant surge is primarily being driven by a mass exodus from Guatemala and Honduras, countries riven by deep poverty, violence, government corruption and droughts believed to be linked to climate change. A stark picture emerges when you overlay Customs and Border Protection apprehension data with population estimates for the two countries. One of every 211 Guatemalans has been taken into custody crossing the U.S.-Mexico border between October and February; for Hondurans, it’s one out of every 155. Those numbers are expected to grow as the weather warms over the next couple of months.

I don't think we can count on Central American governments to help us on this. We need to get control of our border ourselves.

While U.S. immigration policy has become suicidal, people smugglers have developed a more sophisticated system to get their human customers here.

The Washington Post recently reported that smugglers are increasingly using an intricate network of buses to move large groups of migrants from Central America to the U.S.-Mexico border in a matter of days, rather than the weeks it previously took migrants to cross Mexico. The Dallas Morning News reported that the smugglers are aggressively marketing their services, particularly in Guatemala, to convince people to make the journey north.

And why not?  Trump's America is more open than ever.