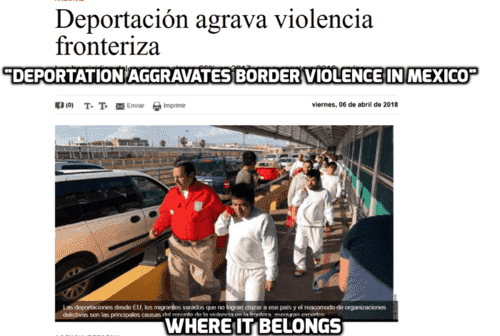 Stopped cold at the border, the Camp-Of-The-Saints Caravan that carried 200 Central American “asylum seekers” mostly from Honduras through Mexico spotlights one of those “growing problems” we’re always reading about.

In this case, it’s crime, violence and murder, all of which are worsening in Mexico. Last year, 2017, it was higher than it’s been in decades, and in the first quarter of 2018, 7,667 people were murdered [Mexico: Nearly 8,000 People Murdered In Just 3 Months, by Paul Bois, The Daily Wire, April 23]. More importantly for Americans,  the Mexican side of our southern border is much more violent than it has been.

It’s a bad situation, and the source of some cognitive dissonance among Mexicans because of their scapegoat:  El Presidente Trump. They’re angry because he’s trying to impose some measure of sanity to our side of the border.

As one newspaper reported it:

Deportations from the United States, stranded migrants who can’t cross to that country [the U.S.] and the reorganization of criminal gangs are the principal causes of the increase of violence on the border, say experts

So that’s it: Gangs, deportees and putative political asylees are causing the crime, violence and murder in Mexico.

But wait a minute. During the 2016 Presidential campaign, Mexico and the U.S. Main Stream Media hysterically claimed Trump was a racist for suggesting that criminals are among the illegal alien horde that Mexico has vouchsafed us.  Are Mexican “experts” now saying he was right? In a way, yes. But to keep the borders open, they have to say he is wrong. So Trump, not the actual criminals, is responsible for the crime.

Listen to Eunice Rendon (right) a white Mexican of partially Chinese descent with a PhD. In Public Policy. She is, we are told, an expert on migration and crime and violence prevention. In 2016, she spent some time as director of Mexico’s Instituto de los Mexicanos en el Exterior, a government agency existing to strengthen ties with Mexicans and Mexican-Americans in the United States.

Now, she’s coordinator of Agenda Migrante (Migrant Agenda), an organization she founded in partnership with Jorge Castañeda (below right) Mexico’s former foreign minister who is well-known to VDARE.COM readers. 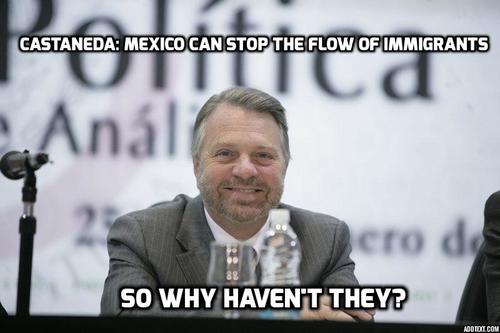 Castañeda’s involvement tells you what you need to know about Agenda Migrante. For decades, he has pushed for Open Borders—ours, of course—famously gloating in The Atlantic Monthly that “some Americans...dislike immigration, but there is very little they can do about it”  [Ferocious Differences, July, 1995]. As well, he notoriously called for illegals to jam the U.S. immigration courts to delay deportation. Nor does he want Mexico accepting deportees who are not proven Mexicans..

But I digress. Back to Rendon, who blames Trump for the border violence: “We increasingly have more people stranded in their attempt to enter the United States”—meaning those who can’t cross the border stay in Mexican border cities and commit crimes.

We must take care not to criminalize the migrant populations. That doesn’t mean they are criminals, but Mexico is not ready to absorb these populations, to integrate them.

But if all immigrants are great people who do the jobs natives won’t do, why can’t— or won’t—Mexico absorb them? And if they aren’t criminals, why all the fuss about border crime?

We all know the answer: Border security for me, but not for thee.

No kidding! But what about the effect on our country—the U.S.A? We’re not allowed to consider that.

Trump, Rendon complained, “criminalizes, utilizes [for political purposes] and constantly violates the human rights of our fellow Mexicans,” and stricter border controls on our side of the border cause “increases in violence” on Mexico’s side.

Again, how so, if Trump is wrong about the nature of illegals and refugees? If they aren’t criminals when they’re here, why do they become criminals there? I guess it’s another example of that “magic dirt.”

And how exactly has Trump violated anyone’s human rights, constantly or even once? it’s enough to make your head explode.

But Rendon offered something of an answer to one aspect of the border-crime problem:

The modification of migratory flows, and of stranded populations on the border and those who return and can’t find opportunities, can contribute to the growth of the informal economy and the use, on the part of crime, of those who pass through and unaccompanied minors who become easy and useful prey for certain tasks of the criminal band.

The solution to the crime problem, from Mexico’s perspective, is obvious. The U.S. must open its borders and keep them open. Forever.

The largely white Mexican elites want their country’s criminals to come here. And that includes any Central American illegals who caught a ride on the caravan.

Mexico’s violence is lamentable, and we should hope it decreases. But Trump’s job is protecting Americans, not Mexicans. He’s right to stop Mexico from dumping its criminals—its “wretched refuse,” so to speak—into the U.S.

One way to do it? Build that Wall!