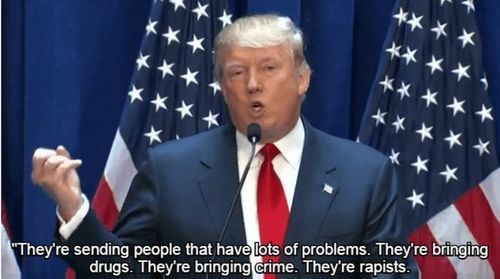 After years of teasing the press, Donald Trump is officially running for President, exactly as VDARE.com's Matthew Richer bravely predicted. One can't help but think The Donald thought his announcement would be greeted by rapturous applause. Instead, there's been barely concealed fury from the Main Stream Media.

Some people say he's not a serious candidate. But the argument over "seriousness" is one I can't take seriously. Hillary Clinton is widely favored to be the next President and I have yet to find anyone who can name one actual accomplishment of her time as First Lady, Senator, or as Secretary of State.

Some say he's just a shallow salesman. But I'd rather a salesman than someone like Paul Ryan, who cynically and shamelessly lies to his own supporters.

Yet the MSM seems angriest because Trump mentioned immigration. I take great joy in quoting from Think Progress below:

“Some, I assume are good people. But I speak to border guards and they tell us what we are getting,” Trump continued. “They are not sending us the right people. It’s coming all over South and Latin America and it’s coming probably from the Middle East. But we don’t know because we have no protection and we have no competence. We don’t know what is happening and it has got to stop and it has to stop fast.”

Trump also indicated that he would build a “great, great wall on the southern border” and that he would undo the president’s executive action known as the Deferred Action for Childhood Arrivals (DACA) program.

Would it be better if more "mainstream" Republican candidates were making these arguments? Well, yes. But such is donor control over the Republican Party that only someone with his own source of funding can say these kinds of things. And it will be fun to watch him criticize the other Republican candidates.

Besides, who is the Beltway Right to complain? Trump has been given speaking slots at CPAC (even as conservative intellectuals are chased away), has partnered with conservative movement organizations like Americans for Limited Government, and regularly appears on Fox News. Any conservative whining that Trump is not "serious" has to explain why he was apparently "serious" enough to be used as a source of media attention and funding in the past.

And who actually is a "serious" Republican candidate with well thought out positions? Jeb Bush?