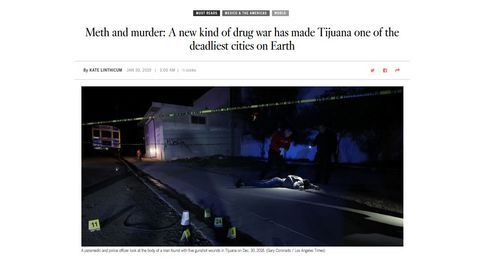 South Of The Border, Drug War Racks Up Record Murders In Tijuana

Sunday’s Los Angeles Times headlined the drug crime in Tijuana with a rather raw picture of a shooting victim, killed in the current conflict.

The photo caption below reads: A Red Cross paramedic examines the body of a man shot in an alleyway in Tijuana, where a record 2518 people were slain in 2018. 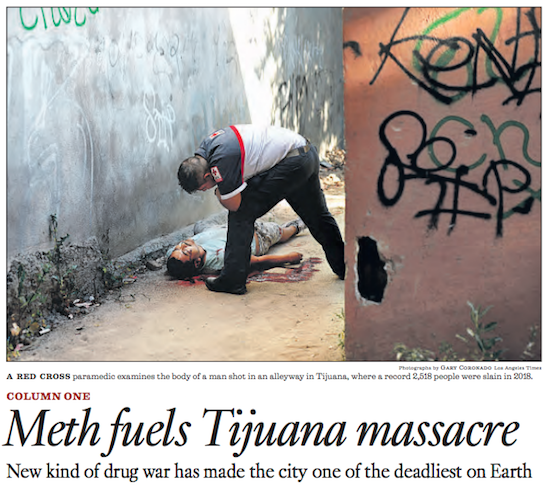 The article is a visceral horror story of deadly violence, and is a reminder that America borders the Third World, specifically one of the most dangerous nations on earth. In fact, last year saw a record high rate of murders in Mexico as a whole, so the Tijuana violence is not an outlier.

San Diego is fortunate to have a border wall to keep most of the diverse crime in Mexico: as noted by the Times, the California city had a 2018 homicide rate of just over 2 killings per 100,000 residents, compared with Tijuana’s 140 killings per 100,000.

Meth and murder: A new kind of drug war has made Tijuana one of the deadliest cities on Earth, Los Angeles Times, January 30, 2019

It seemed like everyone in Christian Castillo’s life was getting killed or running from death.

Two neighbors on his block were gunned down, along with the taco vendor at the end of the street. Then came a childhood friend of Castillo’s mother who had started selling drugs and was shot dead with her husband. Soon their son was executed, too.

Castillo, who until a few years ago held a good job at a Tijuana insurance company, didn’t attend any of the funerals. He was too busy getting high and trying not to be killed next.

“It felt like death was following me,” he said.

Tijuana, a city of 1.8 million that not long ago was celebrating a major reduction in violence, is in the grip of an unprecedented homicide crisis.

The root cause of the bloodshed is fundamentally different from previous iterations of violence in Tijuana.

In the past, the body count was driven by powerful drug cartels battling over lucrative trafficking routes to the United States. Now the main cause is competition in a growing local drug trade, with low-level dealers sometimes dying over the right to sell drugs on a single street corner.

Local and state officials estimate that up to 90% of the city’s homicides are linked to local drug sales, and authorities say they are seeing a similar pattern in Juarez, Cancun and other Mexican cities at the forefront of a nationwide rise in killings, which have nearly doubled over the last three years.

“We’re at war,” said Jesus Escajadillo, a medical examiner at Tijuana’s morgue, who one morning last summer was stooped over a tattooed body in a Lakers jersey, using forceps to dig out the bullet that had destroyed the man’s face. “We are living through a civil war.”

Morgue workers burn incense, run air purifiers and dispense dust masks to visitors to battle the stench of death, but at times bodies pile up on the floor and the smell seeps outside, sickening neighbors down the street. . . .[More]