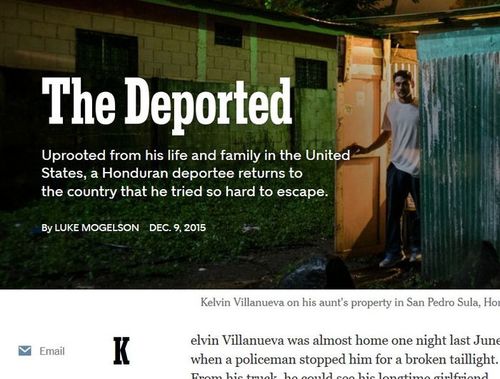 Kelvin Villanueva was almost home one night last June when a policeman stopped him for a broken taillight. From his truck, he could see his longtime girlfriend, Suelen Bueno, waiting for him behind the glass door of their apartment. She often did that when he worked late. Villanueva supervised a small team of Hondurans — like him, undocumented migrants — who did finish carpentry on construction projects throughout Kansas City. It was normal for them to put in 12-to-14-hour days. During his 15 years in the United States, he had never been pulled over. Still, Bueno worried. The threat of deportation did not subside with time. You just had more to lose.

Before Bueno reached them, the officer had arrested Villanueva. After being transferred to Immigration and Customs Enforcement, he spent the next four months circuiting a nexus of prisons and detention centers. Mostly, he was in a Mis­souri county jail that held Americans accused of felonies. Fights frequently broke out between the black and Latino inmates. Villanueva kept to himself, rarely leaving his bunk, passing the weeks by reading and drawing. He called Bueno and their children every day. When they met seven years earlier, at an adult-­league soccer game, Bueno already had a young son and daughter; she and Villanueva had since had another one of each together. Villanueva didn’t differentiate. He’d always treated Bueno’s first two children as his own. Now, when the kids asked when he would be back, Villanueva told them, ‘‘Soon.’’

Bueno, who was also undocumented, could not visit Villa­nueva during his incarceration. Instead, she borrowed enough money to hire an immigration lawyer, who filed an asylum claim on Villanueva’s behalf. Before his hearing with an immigration judge, Villanueva was interviewed by an asylum officer, whose job it was to determine whether he possessed a ‘‘credible fear’’ of persecution in Honduras — would he be at risk of harm because of his race, religion, social group or politics? The officer’s analysis would inform the judge’s decision on whether to suspend or proceed with Villanueva’s deportation. When Villanueva spoke with the officer — from prison, by telephone, via a translator . . .

Note that after 15 years in the U.S.A. the guy still needs a translator.

. . . she began by asking him why he came to the United States in the first place.

‘‘To live and work,’’ Villanueva told her, ‘‘because in my country it is very difficult.’’

‘‘Difficult’’ might have been an understatement. Honduras is among the poorest and most violent countries in Latin America, and Villanueva’s hometown, San Pedro Sula, has ranked as the city with the highest homicide rate in the world for the last four years. (In 2014, 1,319 of its 769,025 residents were murdered.)

Read this next bit carefully.

Much of the bloodshed is gang-­related. During the 1980s, waves of refugees fled civil conflicts in El Salvador, Guatemala and Nicaragua, many settling in Los Angeles, where street gangs were proliferating.

The syntax there implies that the proliferation of street gangs preceded the waves of refugees.  Is that really so?  Why would the Times wish to imply that?

To show that the condition of these countries is all our fault, that's why.

Among Central Americans, two dominant organizations established a vicious rivalry: the Mara Salvatrucha, or MS-13, and the 18th Street Gang. When tough-­on-­crime legislation during the 1990s generated mass deportations, thousands of California gang members were sent back to developing countries ill ­equipped to receive them. In feeble, corrupt states like Honduras, the MS-13 and the 18th Street Gang flourished . . .

Although the officer found Villanueva credible, she did not consider him eligible for asylum; the immigration judge agreed. Villanueva was sent to Louisiana, where he was loaded onto a plane with more than a hundred other Hondurans. They wore manacles on their wrists and ankles, and their hands were shackled to chains around their waists. Armed guards accompanied them. Midway through the flight, bologna sandwiches and cookies were distributed. They were packaged individually, the sandwiches and cookies. Most of the handcuffed men and women found it easiest to tear the plastic with their teeth.

[The Deported: Uprooted from his life and family in the United States, a Honduran deportee returns to the country that he tried so hard to escape, by Luke Mogelson; New York Times, December 9th 2015.]

At the time I am posting this (1:25pm EST Wednesday) the Times story has accumulated 109 comments, overwhelmingly unsympathetic to Mr Villanueva.

You have to go through the first fifteen "Readers' picks" before you get a comment sympathetic to the illegals.  Samples of those first fifteen, in order:

Where are the detailed empathetic stories of American citizens displaced by unemployment, struggling to "live and work" and who find it "very difficult" (using the words of Mr. Villanueva) in American cities with gangs and violence and poverty? . . .

Another NY Times sob story about another illegal immigrant. Frankly I am tired disgusted of the NY Times continued biased reporting in support of illegal immigration . . .

These constant attempts by hand wringing liberals and Democrats to gin up support for illegal aliens who break U.S. law by entering our country are losing, not gaining, sympathy with Americans . . .

The #1 Liberal defense of allowing illegals to come here: "they're doing work Americans won't do".

I'm not sure about Missouri, but where I live, lots of Vermonters make a living doing finish carpentry . . .

I am a left and a progressive voter, however there is one issue that I am opposed to, and that is turning a blind eye to illegal immigration. I am a legal, bonded, insured, tax-paying contractor and I am constantly competing and losing jobs to illegal aliens who are not only willing to work for sub-industry wages but have no overhead like I do. The overhead to run a legal contracting business is overwhelming . . .

There is no country in the world where Mr. Villanuava would have been permitted to remain after having entered illegally. Our current overachieving class, which promotes itself via "activism", demonstrates its utter inability to reason morally when it pushes politically correct nonsense like this . . .

Well Gee if he stayed in his home and improved it he would not be in this situation. He probably should have been deported much more quickly, and never return to our country illegally again . . .

A very sad story but typical of the sob stories which appear in the NYT about illegal aliens. I am sorry he doesn't deserve to return to the US. He should try for a visa in Mexico or another country further south . . .

I am entitled to keep my country. I am not obligated to give away my country and my children's birthright to the hordes of the Third World . . .

What is the point of this article? Clearly the Times assumes a position that everyone somehow has a right to come to the US and we should feel sorry for anyone who is treated as the law prescribes and sent home . . .

Let the refugee sob stories begin. So predictable from this "news" outlet.

His situation is unfortunate. But the answer can't be that any of the billions of people who have it just as bad or worse than he does can move to the United States without permission . . .

Costa Rica or Mexico would've been the closest safe countries for someone with a credible fear of persecution. Instead, this man who wanted a better life came all the way to the US. No matter how much we want to help every underprivileged or persecuted person in the world, and there are many, we cannot. Our immigration laws, like all our laws, must be enforced . . .

Where did those voices have any political outlet before Donald Trump showed up?  In which major political party?