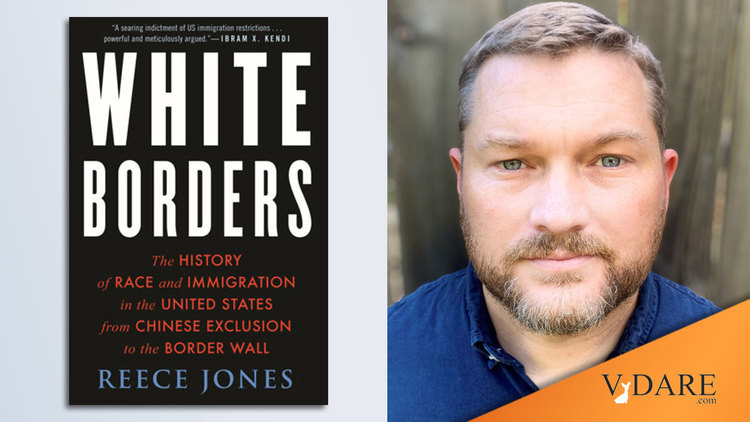 In his  White Borders: The History of Race and Immigration in the United States from Chinese Exclusion to the Border Wall, Reece Jones argues that American leaders restricted immigration throughout most of our history to protect the white, ethnic and racial majority. But, he says, that explicit white racial consciousness conflicted with Jeffersonian egalitarianism—an idea that Thomas Jefferson himself didn’t really accept. Nevertheless, Jones avers, Americans must pretend otherwise and accept their own dispossession and replacement. The first half of the book provides compelling evidence that modern immigration patriots are correct: preserving the Historic American Nation comports with what the Founders and most American leaders wanted up until 1965. The rest of the book points-and-sputters about John Tanton, the Pioneer Fund, VDARE.com, etc. etc. Ignore that. The key takeaway: A leftist is right about mass immigration… He just draws the wrong conclusions.

Jones appeals to an “inclusive version” of Thomas Jefferson’s legacy, “where freedom and equality are protected for everyone regardless of their race, religion or place of birth.” Ignore that “freedom” and “equality” tend to be enemies; Jones confesses that “Jefferson’s actions show that it is a misunderstanding of his words to think that he meant anything other than only white men are created equal.” Even this may be a stretch. Jefferson spoke of man’s “natural aristocracy,” and his version of “equality” was simply a means to clear away the aristocratic barriers that prevented the fittest from ruling.

Nonetheless, Jones frames his story as America’s failure to live up to Jefferson’s egalitarian ideal. Indeed, the book ends with a call for the abolition of borders because they interfere with the “aspiration” of equality. “The first step toward that aspiration is to recognize that because immigration restrictions are a tool of white supremacy,” he writes, “then free movement must be the position of anyone opposed to it.” He’s right. This breathtakingly extreme call for national suicide is the logical conclusion of egalitarianism and fantasies about a “nation of immigrants.”

The only difference between Jones’s position and mine is that he thinks we should scrap the existing nation in favor of the “aspiration.” I say the “aspiration” is stupid and evil, and preserving our actual country is more important than a self-evidently false abstraction.

Besides, Jefferson himself is already being expelled from the American pantheon. Monticello has become a monument of shame. The University of Virginia has turned on its founder, Charlottesville has disowned Jefferson, and The College of William & Mary might soon do the same to its most famous alumnus [Security added followed defacing and attempted removal of Jefferson statue at William & Mary, by Alexa Doiron, WYDAILY, June 29, 2020].

Jones seems to argue that Americans must defend Jefferson’s true “aspiration,” even if the Sage of Monticello was blind to it himself. Yet if Jefferson is no longer a hero, why read what he wrote, or see him as the egalitarian cynosure? Thus, he belongs to genuine conservatives, immigration patriots, and the Dissident Right because leftists will not take him. I would take Jefferson at his word regarding specific policies: He thought America should be a white country.

Most American leaders did too. Jones has given us a genuinely subversive book that makes our case for immigration restriction. He correctly argues that America was imagined as a white nation for most of its history, with a remarkably broad coalition of American leaders of differing politics, regions, and social background endorsing this vision until the 1965 Immigration Act.

Jones’s discussion of the challenge mass immigration presented to labor—long before 1965, by the way—had me nodding in agreement. Before and after the Civil War, American workers organized against wage-busting Chinese immigration. A Massachusetts factory owner used Chinese contract labor to break a strike in 1869. President Ulysses S. Grant, no neo-Confederate, blasted Chinese men who “do not come voluntarily… but come under contracts with head-men who own them absolutely,” and Chinese women who come for “shameful purposes.” Jones complains that enforcement of immigration laws focused on the Chinese rather than employers, always the most dangerous traitors. My idea: The government should have sent those workers back to China with money seized from the employers.

Jones notes that California’s attempts to restrict Chinese immigration failed because the United States Supreme Court ruled that only the national government could regulate immigration. Thus, the “completely uncontroversial” Page Act, which regulated Chinese immigration, was passed “by voice votes in the House and Senate” in 1875. Even after the Reconstruction Amendments nullified the U.S. Supreme Court’s Dred Scott decision, which restricted U.S. citizenship to whites, the 1790 Immigration Act’s language linked citizenship and “free white person” until 1952:

Consequently, for the first 162 years of the United States, citizenship was formally limited to whites only and, after 1870, former African slaves and their descendants.

Jones devotes much space to racial science, particularly the way “racism” correlates with conservationism. He simply asserts that “scientific research today has demonstrated that race is a socially constructed system for classifying people, not a genetic fact.” While race as a biological category doesn’t exist, he says, “racism and exclusion based on common ideas of race still exist.” So we can still talk about “white privilege.” Thank God for that. Otherwise, given that the left has utterly abandoned the idea of fighting for workers, what would progressives even do?!

Another of Jones’s unintentional accomplishments is showing the breadth of the coalition that stopped mass immigration in the 1920s.

V.S. McClatchy and the West Coast anti-Asian organizations settled into an odd coalition with other regional groups that wanted to restrict immigration. In the Northeast, Massachusetts senator Henry Cabot Lodge and his wealthy elite friends at MIT and Harvard were worried about diluting the racial stock of America. In the Midwest, labor organizers like Samuel Gompers feared that the new immigrants were a threat to the wages and jobs of American workers. In the Jim Crow South, the Ku Klux Klan was reborn as an anti-black and anti-immigrant organization.

Indeed, Jones shows that WASP elites, far from the “invisible race” they have become today, led conservation and immigration restriction. The Progressive movement, which linked the conservation, social reform, and human improvement movements, was also spearheaded by those who thought Anglo-Saxons had a special destiny. Among them was President Teddy Roosevelt, still a GOP hero and Wise Man—except for anything he says about race.

This broad coalition won victory with the 1921 Emergency Act and the 1924 Immigration Act. In his essay “Whose Country Is This?” [Good Housekeeping, February 1921] Calvin Coolidge explained the common sense in the legislation: “There is no room for either the cheap man or the cheap goods.” That could be a motto for national and civilizational survival.

In detailing the links between eugenics, racial science and those who support them, Jones might think he discredits immigration restriction. Instead, he raises a more fundamental question. Why did the American Establishment, including White Anglo Saxon Protestants, turn so monolithically against immigration patriotism after World War II?

The closest we get to an explanation: Nazi atrocities.

After the war, Americans reconsidered “the role of race in American society as more people began to question the racial order of the Jim Crow South and the Euro-American colonization of the rest of the world.” World War II, as R.R. Reno established in Return of the Strong Gods, has essentially been retconned into a war against ourselves and our own national past.

The tide indeed turned after World War II with the McCarran-Walter Immigration Act of 1952, which removed “free white person” from naturalization requirements. John F. Kennedy wrote A Nation of Immigrants in 1958, which attacked racial and national quotas. Jones says the book was likely ghostwritten by Kennedy’s aide Myer Feldman, himself the son of immigrants and the later president’s “anonymous man,” who met secretly with the Israeli government and fed hostile questions to reporters to ask Barry Goldwater [Myer Feldman, 92, Adviser to President Kennedy, Dies, by Douglas Martin, New York Times, March 3, 2007].

A Nation of Immigrants argued that a “generous” immigration policy would allow America to “turn to the world, and on our own past, with clean hands and a clean conscience.” Of course, what we’ve seen is the opposite. We imported a race problem. “Migrants” see themselves as righteous conquerors.

Jones also shows that the 1965 Hart-Celler Immigration Act was adopted without much consideration of what would happen. The Johnson Administration accepted an amendment that would allow “family reunification” with the understanding that most applicants would be white. “Although President Johnson and the Kennedy brothers said repeatedly that the Hart-Celler Immigration Act of 1965 would not change the ’ethnic mix of this country,’” Jones writes, “they turned out to be wrong.”

In contrast, segregationists like Senator Allen Ellender of Louisiana were right. They warned darkly that America would be “swamped by the Asians and Africans coming into the United States,” who would reinforce ghettos already “plagued by poverty, ignorance and disease.” Of course, because Ellender and those like him were right, Jones treats them with contempt. The new population imported to replace Ellender’s constituents now holds the whip hand, as Enoch Powell's famous anonymous constituent prophesied.

This is White Borders’ central paradox. Jones observes that America’s Founders and leaders wanted to build a country for whites, which led to race-based immigration, a moral crime. This didn’t change until the middle of the 20th century. Had politicians kept to the immigration policy we had. we wouldn’t have the problems we have now, including ungrateful immigrants who think our history is a “crime.”

Indeed, those like Kennedy—or, more likely, Feldman—who claimed immigrants would strengthen America had it backwards. New immigrants see America’s past history as a “crime scene,” to use Vice President Kamala Harris’ words [For Kamala Harris, America Is the ‘Scene of a Crime,’ by Gregory Hood, American Renaissance, February 22, 2019].

The remainder of the book delivers, again, the message of all Regime Journalism: Americans who oppose mass immigration must be silenced.

To his credit, Jones unflinchingly states what he wants for America: no borders. He wants, again, “freedom of movement” for everyone, which of course means the existing population becomes essentially powerless.

And why must Americans accept this? Because Jefferson, a totem of American identity, can be used to shame our countrymen into going along with an Open Borders agenda they know is bad for them and their country. Yet this isn’t what Jefferson really wanted, which is why leftists like Jones hate the real Jefferson.

White Borders shows that what modern immigration patriots want is within the American tradition—and far more moderate than what our leaders historically thought was sensible policy. It also shows the difficult truth that ideas are eventually taken to their logical conclusion.

The great lesson of White Borders is that America was lost because great men saw that demography is destiny but failed to act. They assumed someone else would or that truth, by itself, would prevail.

If something resembling the Historic American Nation, or Western Civilization, or anything other than a giant favela is to exist in the future, we cannot afford such errors of compromise and cowardice.

White Borders is valuable because it proves the opposite of what the author intended. Open Borders lead to external invasion and internal destruction. Separation between citizens and foreigners must be strictly, explicitly, and perpetually defined if any nation-state is to endure.