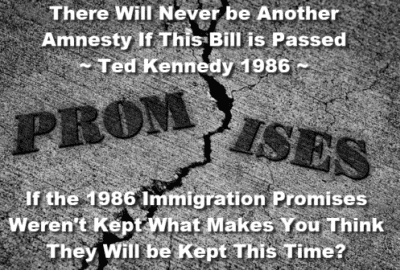 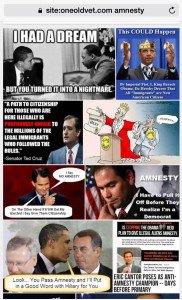 Patrick Cleburne told me that he wished blogger OneOldVet was still posting pictures, at least, because he had such a good eye. (OneOldVet is on hiatus, and is much missed.) OneOldVet's archives are still online, with all his useful pictures. At  right is a screenshot of what a Google Image Site Search of OneOldVet.com for Amnesty looks like. As for the one at the top of my post today (about Ted Kennedy's broken promises) it's very true, but  I had to look twice to see that the text referred to the 1986 Amnesty.

That's because we've documented here that all of the promises made by Ted Kennedy and other contemporary immigration enthusiasts during the passage of the 1965 Immigration Act were broken.  See So Much for Promises – Quotes Re 1965 Immigration Act, by Joe Fallon, originally published in the Social Contract, Spring 1999.

“Out of deference to the critics, I want to comment on … what the bill will not do. First, our cities will not be flooded with a million immigrants annually. Under the proposed bill, the present level of immigration remains substantially the same … Secondly, the ethnic mix of this country will not be upset … Contrary to the charges in some quarters, S.500 will not inundate America with immigrants from any one country or area, or the most populated and economically deprived nations of Africa and Asia. In the final analysis, the ethnic pattern of immigration under the proposed measure is not expected to change as sharply as the critics seem to think. Thirdly, the bill will not permit the entry of subversive persons, criminals, illiterates, or those with contagious disease or serious mental illness. As I noted a moment ago, no immigrant visa will be issued to a person who is likely to become a public charge … the charges I have mentioned are highly emotional, irrational, and with little foundation in fact. They are out of line with the obligations of responsible citizenship. They breed hate of our heritage.”[Emphasis added.](Senate Part 1, Book 1, pp. 1-3)