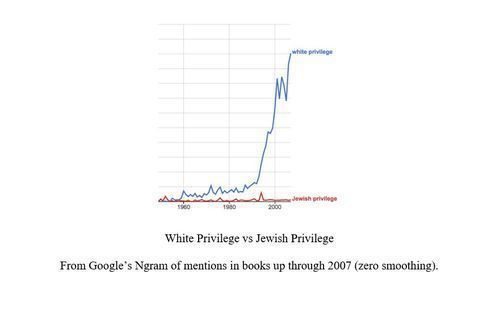 From Google’s Ngram of mentions in books up through 2007 (zero smoothing).

The less white privilege exists, the more it gets talked about.

In my general impression, white privilege and Jewish privilege are fairly comparable in causes, magnitude, as well as quantity and quality of evidence for their existence. For example, whites tend to make more money than nonwhites and Jews tend to make more money than gentiles, and for roughly similar sets of reasons. Whether “privilege” is an appropriate term for either of the two gaps are about equally arguable.

In other words, thinking about Jewish privilege can help us obtain a better perspective on white privilege and vice-versa.

The main difference between the two as of 2018 is that our society is obsessed with uncovering and crushing examples of white privilege and is utterly oblivious to the potential existence of Jewish privilege.

The quantity of assertions about Privilege might decline somewhat, but the quality would definitely increase.