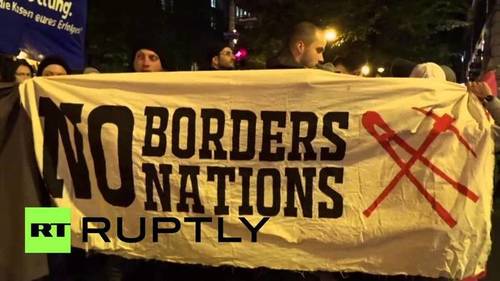 German Leftists Favor Refugees BECAUSE They Hurt The Country

Recently, Germany celebrated the 25th anniversary of its reunification. Naturally, German leftists took to the streets to condemn it. The forthrightly anti-German protests were largely ignored by the Main Stream Media, with the exception of Russia Today.

Celebrations are taking place over the weekend all over the country, including in the capital, Berlin, where thousands gathered for a traditional street party at Brandenburg Gate, with stage performances, beer gardens and horse racing at Hoppegarten. But the focal point of the festivities, which traditionally rotates on an annual basis, is Frankfurt which is playing host to pop concerts and an art installation on the Main River.

However, over 1,000 people marched through Frankfurt city center on Friday evening to protest the upcoming festivities amid current controversy over social and migration policies. Their banners read “Abolition of borders – Germany defeated,” while people wondered whether there was a real reason for celebration, considering “discrimination, poverty and dissociation” in Germany.

You can see a video of the demonstrations below. One of the more charming slogans is "Germany is S##T" (Ever notice how leftists overseas always put their slogans in English?)

As immigration patriots well know, the underlying sentiment behind #refugeeswelcome is not love for refugees but hatred for Europe and Europeans. German leftists are perhaps the most extreme examples of this kind of mindset, as anyone who has visited the country and witnessed their demonstrations well know. Indeed, the "Anti-German Movement" is one of the most import theoretical currents on the German Left. You might even argue it is the German Left, as all other "progressive" concerns (women's rights, gay rights, higher wages for workers, environmentalism, secularism, etc) are secondary to their zeal of bringing in as many Muslims as possible to so they can eradicate Germany.

Needless to say, the MSM did not mention the existence of what is, objectively, a genocidal hate movement dedicated explicitly to wiping out a nation and people. Instead, there is simply more moaning about a few Germans having the temerity to resist their dispossession.

As estimates of the number of refugees arriving in Germany this year skyrocket, a growing backlash is reviving and radicalizing the eastern German PEGIDA anti-Islam movement.

Coinciding with a report in the top-selling Bild newspaper Monday that as many as 1.5 million people could seek asylum in Germany this year — almost double the government’s last official estimate of 800,000 — PEGIDA’s latest march this week in Dresden, where the movement sprang up a year ago, attracted between 7,500 and 9,000 people.

What is so "radical" about these people? They are calling out the "lying press."

Uta Deckow, head of political coverage in the state of Saxony for public broadcaster MDR, said one of her reporters covering a PEGIDA event last weekend in the town of Sebnitz had a sticker pinned to her back with Lügenpresse on it, and when a woman from the crowd tried to pin another to her breast, bystanders just took photographs.

“The level of aggression has increased,” Deckow said, “and the stickers with ‘lying press’ are definitely a new dimension.”

“The verbal attack on our liberal, democratic order — about which we have warned right from the beginning — has indeed radicalized to a degree that we now see full-blown physical violence on the side of these rallies,” said Christin Bahnert, a leader of the Greens in Saxony.

I can understand why slimy reporters don't like this. But is this even controversial? All the press does is lie about immigration. They lie by omission, as when they refuse to report pro-immigration protesters support immigration BECAUSE it hurts European countries. They lie when they try to cover up who is committing crimes. And the press is hardly out front when it comes to defending freedom of speech in Germany, or Europe more broadly.

This is why it's impossible to take talk about "hate" seriously. Politics is about who, not what. What can only be called "hate" of Germany and Europeans is praised. Reluctance to turn over your entire society to Muslims (what normal people would call "common sense" becomes hate.) And the Death of the West rolls on, mostly because the MSM is more interested in hunting down and smearing dissenters than honestly discussing one of the most important developments in world history.