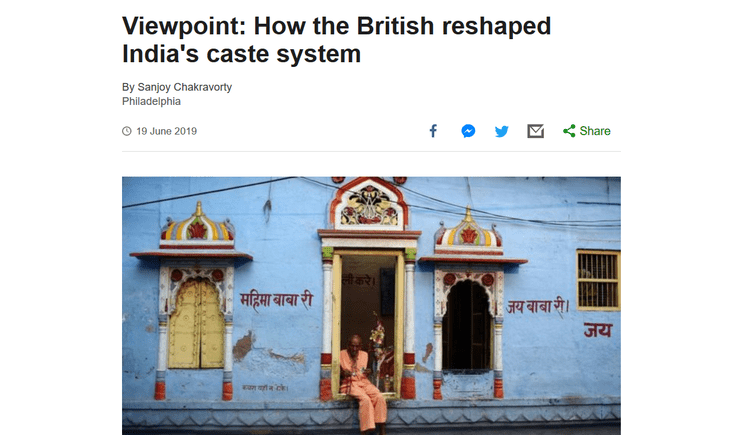 In his new book This Land Is Our Land: An Immigrant’s Manifesto, Indian intellectual Suketu Mehta argues that the United States must let in lots and lots more immigrants, such as Mehta’s cousins and uncles. Why? Among other reasons, reparations for what the British Raj did to India.

Getting sermonized by Indian intellectuals on the Anglo-American world’s failures of egalitarianism is somewhat ironic, what with India’s notorious history of caste discrimination.

But caste is your fault too, White Man!

Sanjoy Chakravorty is professor in the College of Liberal Arts at Temple University, Philadelphia
Philadelphia, 19 June 2019

… In a new book, The Truth About Us: The Politics of Information from Manu to Modi, I show how the social categories of religion and caste as they are perceived in modern-day India were developed during the British colonial rule, at a time when information was scarce and the coloniser’s power over information was absolute. …

The picture that one should see is of astonishing diversity. What the colonisers did through their reading of the “sacred” texts and the institution of the census was to try to frame all of that diversity through alien categorical systems of religion, race, caste and tribe. The census was used to simplify – categorise and define – what was barely understood by the colonisers using a convenient ideology and absurd (and shifting) methodology.

The colonisers invented or constructed Indian social identities using categories of convenience during a period that covered roughly the 19th Century.

This was done to serve the British Indian government’s own interests – primarily to create a single society with a common law that could be easily governed. …

The resulting categorical system became rigid during the next century and quarter, as the made-up categories came to be associated with real rights. Religion-based electorates in British India and caste-based reservations in independent India made amorphous categories concrete. There came to be real and material consequences of belonging to one category (like Jain or Scheduled Caste) instead of another. Categorisation, as it turned out in India, was destiny.

Or, then again, maybe not … From a history professor at Georgetown U.:

Anybody who reads a line of pre-colonial bhakti poetry, for example, knows that the caste as both varna ideology and material oppression existed long before any Europeans showed up on our shores. …

Like others of this theoretical ilk and class position, the world begins and ends for this author with the Raj. Even if one only uses European sources, the Portuguese presence gives us plenty of evidence of caste structuring Indian social life long before the British.

Here’s a screenshot from the late 17th C register of freed slaves I’ve been cataloguing at the Goa State Historical Archives. As you can tell, the vast majority of the slaves are not Africans but lower castes who still exist: kunbis and kolis.

Here’s another screenshot from a Goan village baptism records I’m transcribing. Even after conversion, caste continued to structure social life. Even godparenthood, a new form of kinship introduced by Catholicism, was understood and negotiated through caste. …

Given how easily I can dismantle this idiotic idea with evidence (in tweets!), why has it persisted so long in scholarship and now in popular media? Because it is a self-serving idea for upper-caste diasporic intellectuals. I should know- I am one. Let me explain.

Postcolonial theory allows upper-caste intellectuals to maintain privilege in both India and the US. The Indian educational systems whose benefits disproportionately accrue to the upper castes allowed these intellectuals to make the transition to the west.

Once there, shocked at not receiving the privilege they had back home, postcolonial theory was invented. This theory was used to critique white elites, since it allowed them to position themselves as the brown voice of the subaltern in western academia (e,g, Spivak, Bhabha)

Simultaneously, this theory maintains caste privilege in India. By foisting the blame for caste on colonialism, we absolve ourselves of complicity in caste, even as we continue to benefit from it. These same scholars gate-keep academia from Dalit scholars in India and US

I know this shell-game because I come from precisely this class. I am a bhodrolok upper-caste diasporic intellectual. I know this game as an insider and I hate it beyond all belief.

So, please, for the love of god, stop publishing this pernicious casteist theory in all its forms. Stop teaching it or citing it, unless it is to dismantle it. In the current context of Modi’s India, it is unconscionable to traffic in such garbage.

The elite identification of these theorists, who also systematically dismantled Subaltern Studies, is evident in their behavior in academia too. It is not coincidental that Spivak came running to the defense of Avital Ronell for all her feminist posturing

The grasping desire for power among these scholars is reflected in the empty and ethically hollow nature of their theoretical production. The obfuscatory language that masquerades as sophistication is just a way to hide power. Don’t fall for it.