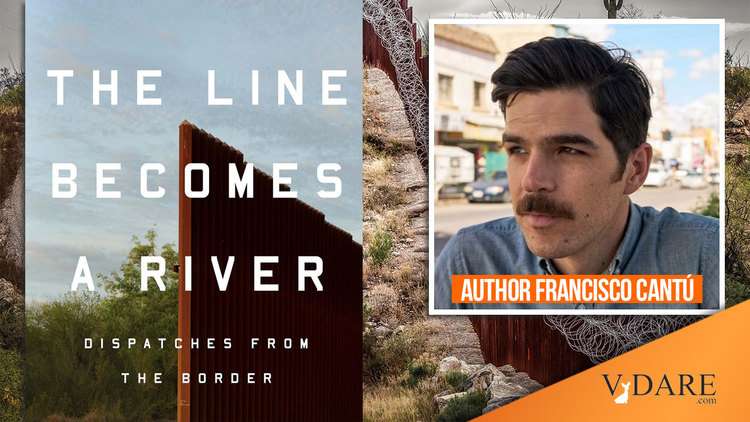 Francisco Cantu [Tweet him] was a Border Patrol Agent for a mere four years, 2008-2012. Then he returned to school to pursue his MFA degree in “nonfiction,” i.e., advanced Leftist indoctrination techniques and Open Borders propaganda; he now works for the University of Arizona. His much-touted 2018 book The Line Becomes a River: Dispatches From the Border documents individual hard luck stories in an attempt to downplay the illegal actions of the “migrants,” aka illegal aliens he encountered, suggesting that  a better title for the book would be ”The Line Becomes A Load of Bull.” But as a former (1999-2019) Border Patrol Agent and author (perforce self-published), I can testify that Bull is what the American Ruling Class (publishing division) wants.

Thus in one scenario described by Cantu, he encounters an illegal alien couple who had broken into a church to seek refuge for the night. He transported the couple back to the Border Patrol station for processing and used that time to get to know the illegal alien couple, one of whom was a pregnant woman. Through his humanization of an illegal alien mother who was trying to sneak back into the country so that her future children could “have a better life,” Cantu makes the illegal alien invaders sympathetic characters. But in reality, they are criminals.

Throughout his book, Cantu attempted to draw the reader into these emotional situations in an attempt to humanize Hispanic illegal aliens and downplay the severity of their illegal actions. But illegal aliens are not victims. And the illegal immigration crisis will not improve until people stop attempting to legitimize the actions of illegals and hold each individual, regardless of their personal circumstances, accountable for violating the law.

This same principle can be applied to immigration policy. While the political elites continue to sell the lie that mass immigration to the U.S. is necessary for humanitarian reasons, they fail to address the real world harm mass migration is having on those who pay the biggest price: U.S. tax payers and, above all, U.S. citizens

It is important to understand that just because a person is weak or disadvantaged, it doesn’t mean they are good, or in the right. I came to this realization while reading The White Nile, by Alan Moorehead. He reports on a husband and wife, Sir Samuel and Florence Baker, who set out to explore Africa, witnessing unfathomable atrocities. They encountered an affable African chief and asked him something along the lines of, ”Why are the weak so kind, and yet their rulers so harsh?” The chief responded, “Most people are bad. If they are strong, they take from the weak. The good people are all weak: they are good because they are not strong enough to be bad.”

Cantu’s book is simply not an honest documentation of the many horrors brought upon via illegal mass migration on the Southern Border. Rather, it is an attempt to garner sympathy for those who do not respect law and order from the subjective viewpoint of a short-term Border Patrol officer who regrets his time on the job.

Another recommended book that provides an honest perspective of illegal immigration: Tales of the Rio Grande, by Bill Jordan. While this book is older and somewhat dated, it documents some of the ”war stories” that every Border Patrol Agent encounters on the job. (See also Chapter One of Jordan’s No Second Place Winner, available online.)

I myself can recount numerous memories of my time as a Border Patrol officer in which the officers themselves were the true victims. They risk their lives and out themselves at risk for the sake of enforcing the law and keeping criminal illegal alien invaders out of our country. Cantu’s book is void of any stories highlighting the many dangerous situations Border Patrol find themselves in on a daily basis.

Late in his book, Cantu lets slip that he is actually three quarters white and only one quarter Hispanic—his father’s name was “Simmons.” He exploits his Hispanic credentials to gain sympathy for Hispanic illegal aliens who are carrying out the Great Replacement of White Americans. But he’s really yet another example of a self-hating, white, liberal male.

In comparison to Cantu’s glamorization of the plight of illegal aliens through the lens of a Border Patrol agent who quit his job, my first book was shopped around to some15 different publishers. One responded that he didn’t want to publish a book that positively portrayed Border Patrol agents. I wound up self-publishing my book with, ironically, a publisher out of Mexico. Turns out the Mexicans don’t have a problem with publishing anything they can make a peso off of.

Francisco Cantu can be found on YouTube talking about his book. However, because I was given a Top Secret-SCI clearance, I’m still waiting in limbo for Customs and Border Patrol’s counsel office to sign off on my second book.

I cannot help but believe that the real reason for giving many of us the elite TS-SCI clearance was not for our jobs—but to shut us up if we ever did decide to tell the truth about our time working for Border Patrol.

Retired Federal Agent Andrew Morrison [Email him] is the author of East Into The Sunset: Memories of Patrolling in the Rio Grande Valley at the Turn of the Century