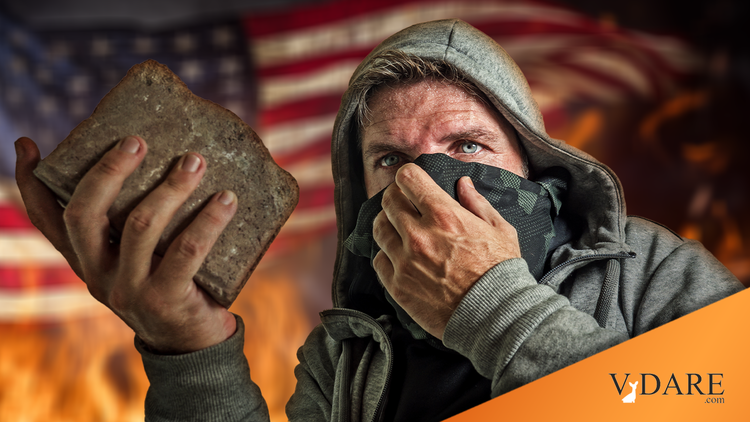 Last week marked the third anniversary of the ambushing of the Unite the Right rally in Charlottesville VA. The organizers of that rally—a lawful, peaceful demonstration for which the organizers had obtained a permit—were attacked by the anarchist mob, who had no intention of being lawful or peaceful and no permit. The city police, under political direction, abdicated their duty to keep order, and mayhem ensued.

VDARE.com, has run some illuminating articles by Unite the Right participants and organizers. It's clear from those accounts that, in the eloquent words of that participant, August 12th 2017 was,

… a dress rehearsal for the anarcho-tyrannical nation-wide insurrection now taking place: Antifa violence; official complicity; police paralysis (unless arresting anyone trying to resist); all protected by tightly controlled Narrative of Legacy Media lies … It looks like Charlottesville 2017 was the beginning of a successful Communist coup against America.

The events of 2020 have made the accuracy of this analysis all too clear. Quite large parts of the U.S.A. are effectively under the control of Antifa today. I'm not just talking about the streets of our big old cities, where Antifa rule is plain to see. The takeover has been institutional. The judiciary, the academy, the media and the social media, the big corporations—all are dancing to the Antifa tune.

The coronavirus pandemic has made things easier for the insurrectionists, at least on the judicial front. "We can't have proper court proceedings with social distancing!" squeal the DAs and prosecutors, as they pocket the big fat envelopes full of cash from George Soros. "Case dismissed!"

And then: "Jails are breeding grounds for the virus," they tell us. "Gotta let prisoners go free!"

Of course, if you have the impertinence to stand and fight when Antifa come round to break your windows, you'll be cuffed, tried, convicted, sentenced, and jailed before you can say "due process."

But wait: Don't we have a National Conservative in the White House? Doesn't he have authority over the Justice Department, to right some of these injustices? Doesn't he have a Secretary of Education to address the totalitarian CultMarx dominance in our universities? A Commerce Secretary to rein in the power of the tech monopolies?

If the Tsar only knew!

Looking back over my own commentaries of three years ago, my eye was caught by a segment in my December 22nd podcast of that year. In that segment I mulled over the theories of convergence that had some currency in the early 1960s—convergence, that is, between American capitalism, as it then was, and Soviet communism, as it then was. I said:

The rough idea was that the USSR would allow more and more private-sector activity while government power in the West would expand, leading eventually to a situation is which the two systems were indistinguishable. They'd have converged to a common political-economic mean.

Those ideas weren't new in the early 1960s, of course. James Burnham had aired them twenty years before in his book The Managerial Revolution, which so fascinated George Orwell.

This was of course a deplorable business, cops taking Mr. Lai away in handcuffs and looting his offices. Several other people were likewise arrested, including one of Jimmy Lai's sons, who has no connection with the newspaper business.

After forty hours in custody, though, Jimmy Lai was released on $65,000 bail. He's at home now, and has been giving interviews to the media [Hong Kong media tycoon says 'the fight has to go on' after 'symbolic' arrest under new law, by Will Ripley and Jenni Marsh, CNN Business, August 14, 2020].

I was struck by the lightness of touch there. In Mao Tse-tung's China, Jimmy Lai would just have disappeared—been given twenty-five years in a camp, or just shot out of hand.

There are of course some restraining circumstances to be noted. Hong Kong is still a key hub for China's business with the rest of the world. To keep up appearances, the ChiComs don't want to thoroughly mainlandize the place, to go full totalitarian on it all at once. They want to keep up a decent facade of legality while shutting down dissent one voice at a time.

Jimmy Lai could never have published his newspaper in the mainland, and mainland dissidents are treated way more harshly than he has been.

Also acting as a restraint on the natural brutishness of ChiCom rule has been their preoccupation with other problems: the coronavirus pandemic; the loss of international face arising therefrom, with consequent trade issues [China’s Huawei, ZTE Set To Be Shut Out of India’s 5G Trials, Bloomberg Business, August 13, 2020]; the severe floods that have been afflicting their country; possibly some insecurities at the top, with Xi Jinping trying to stay on his feet against rivals in the apparatus.

All things considered, though, today's China is not your father's totalitarianism. Visiting China last year, I found the table-talk among ordinary citizens way more open and relaxed than it was in the early 1980s.

That's where the theory of convergence came back to me. China is heading into totalitarianism lite from one side; perhaps we're heading to the same destination from the other side.

The ChiComs have eased up on the pettier kinds of social control while continuing to punish open dissent, and also while quietly setting up a panopticon of data on what citizens are saying, doing, earning, and buying.

Meanwhile we are firming up on those lesser social controls—on what may be said and done in private exchanges, for example between bird-watchers and dog-walkers—while tightening the screws on open dissent.

We're not as far along the road to a panopticon yet, but the trend is in that direction. Not much happens in public nowadays that isn't recorded by security cameras or someone's smartphone.

And there are some features of the modern world that work against hard totalitarianism. A few days ago there came out those video clips of Chinese Uighurs handcuffed and blindfolded, being herded into cattle wagons. Apparently they were leaked by someone with access to the drone footage.

I watched them with a friend. He observed that if we'd had that kind of footage of Stalin's slave-labor camps eighty years ago, it would have been harder for Soviet sympathizers to deny the reality of communism.

The coronavirus pandemic has also been a setback for the panopticon project, which relies heavily on facial recognition software.

What I hear from people working in this field is that—-amazingly, it seems to me—facial recognition can work with people wearing masks … but only in small populations. So if you have, say, a company workforce of five thousand people, all wearing masks, the software can tell you which employee you're looking at. With populations bigger than a few thousand, though, a given image of one masked individual can return multiple matches.

Possibly technology will conquer these issues and all others that limit state power, pulling us back to Nineteen Eighty-Four-style "hard" totalitarianism. I think a convergence to "soft" totalitarianism—totalitarianism Lite—is more probable, though.

It used to be a standard classroom exercise for high-school seniors to read both Orwell's Nineteen Eighty-Four and Huxley's Brave New World, then write an essay on which was the more probable future.

The way things are now trending, both in China and the U.S.A., we shall end up with something of both dystopias: the nihilistic all-wants-supplied hedonism of Huxley's joined to Orwell's managerial panopticon.

We could do worse, I guess; but I shall mourn the loss of our old liberties.