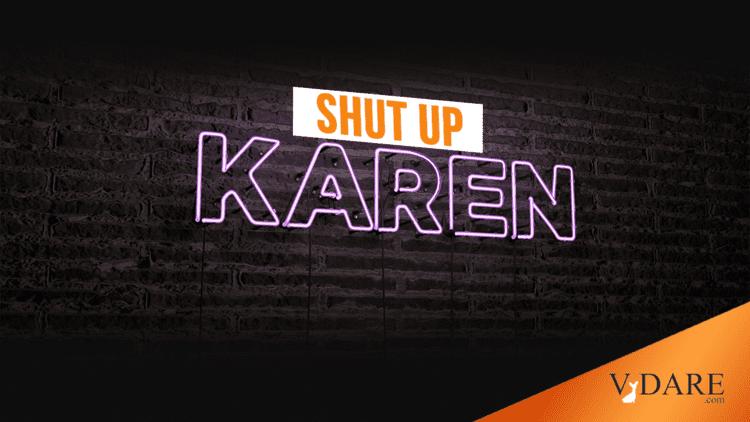 It's very handy to have well-known phrases for social phenomena. A well-crafted phrase can clarify our thinking about a phenomenon, help us see it as what it truly is.

A couple of the best such phrases to emerge in recent years are "virtue signalling" (except that we seem unable to agree on how to spell "signalling," one "l" or two) and "narrative collapse."

For readers who've just wakened from a Rip Van Winkle-style twenty-year sleep, virtue signalling is a species of what used to be called "cheap grace," where you raise your moral standing in your peer groups by cost-free speech or actions. Narrative collapse is what happens at that point in the news cycle when the gentle black giant or winsome black teenager who suffered some misfortune at the hands of a white person turns out to be a low-life thug with a drug habit and a rap sheet.

Watching this week's clip of the lady in Seattle going into high hysterics after being confronted by a black guy over some kind of trivial negative encounter, I'm thinking we need a phrase for this. It is, after all, looking to be a thing.

The business of Amy Cooper and her dog in New York City's Central Park four weeks ago was very similar. That was the episode that introduced the general public to the tag "Karen," indicating a white woman asserting her white privilege. So perhaps the phrase we're seeking here is something like "Karen abuse" or "Karen shaming."

These two incidents—that one in New York and this one in Seattle—are, I would guess, the tip of a very big iceberg. I can recall from private conversations across many decades, hearing stories from white women who have felt intimidated to the point of high nervousness, if not actually shrieking hysteria, by the behavior of black men in a one-on-one encounter.

In some of these episodes, as I've heard about them, the black guy is not at fault in any way. An office colleague, a young white female New Yorker of properly liberal sensibilities, once confessed to me that if she was alone in an elevator, and a large black guy got in, and the two of them rode a few floors together, she felt highly uncomfortable.

"What," I asked her, "in a way you wouldn't feel if it was a small Asian guy?" Yes, she admitted.

She was obviously wracked with guilt about what she had just confessed. Just as obviously, there is not necessarily any fault here on the part of the black guy.

You have to suspect, though, that blacks know about this; and that black men of a certain temperament have malicious fun with it. With the advent of the smartphone and the ability to make video recordings and post them, the temptation to stage a Karen-shaming incident must, to a certain personality type, be irresistible.

There is also the element of revenge. Black Americans are taught in our schools and colleges to be angry about slavery and Jim Crow. It's not surprising that some blacks, as adults, are looking for revenge against Whitey. (What's surprising is that most blacks aren't.)

White kids, undergoing that same education, are taught that they share responsibility somehow for all that cruelty and oppression, so a corresponding proportion of them arrive in adult life loaded with racial guilt.

The guilt is mixed with fear, though. Most whites, by the time they arrive at adulthood, know the Great Unmentionable of social life in our country: that blacks are, in the statistical generality, a whole order of magnitude more violent and dangerous than other races.

And there, with smartphone in hand, you have the ingredients for a perfect Karen-shaming.

Locate a Karen; get alone with her; pick a quarrel, all the while maintaining a cool middle-class non-ghetto demeanor with just the merest slight seasoning of aggression; press the quarrel to the point where her personality disintegrates; force her to a virtue-signalling punch line if possible—the Seattle lady started yelling that she has a black husband, although whether she actually does or not, I haven't been able to ascertain—then post the whole thing on social media. Hey, it's fun!

With any luck, the Karen will be identified and fired from her job—that's the real prize, the cherry on the revenge cookie. Even if she doesn't get fired, though, you've Karen-shamed her: made her look like a hysterical nitwit—and, best of all, a racist!—to millions of viewers. How sweet it is!