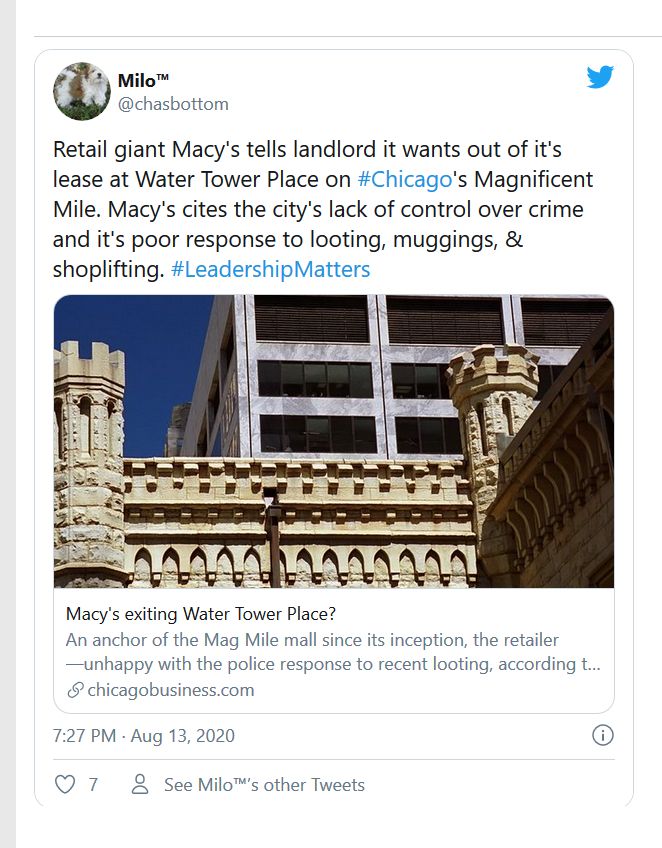 Chicago’s Magnificent Mile has the highest retail rents in the United States outside of Manhattan, Beverly Hills, and San Francisco. The Water Tower Place shopping mall was constructed in 1975 at 835 N. Michigan Avenue, northeast of the Loop and about as far from the urban undertow of the South and West Sides as possible. It has been more or less the center of where tourists and Chicagoans go to spend their money ever since.

The Water Tower mall was built by the Marshall Field corporation to feature their new jewel in the crown store as their giant old flagship on State Street in the Loop declined. Macy’s acquired Marshall Field in 2005.

The demolition of the Cabrini-Green housing project one mile to the west by 2011 seemed to assure the future of the Mag Mile.

That Water Tower Place has been looted twice since Memorial Day is disturbing to anybody, like me, who admires America’s great cities and the chance for civilized life within them.

A riot every decade or two is one thing. For example, there was a certain amount of looting on N. Michigan Avenue after the Bulls won their second NBA title in 1992 a couple of months after L.A.’s Rodney King riot. From the Washington Post in 1992:

Similar scenes were playing out along affluent North Michigan Avenue, the collection of expensive department stores and boutiques known as the “Magnificent Mile.” Although the damage was nowhere near as great as on the South and West sides, about nine stores had their windows smashed and some merchandise was taken.

At Stuart Brent Books, a well-known bookstore in the city, looters smashed the windows and simply threw books all along the sidewalk.

Stuart Brent Books was my favorite bookstore of all time. I can recall the first time I walked into it on the first nice day in the spring of 1983. You have to imagine how bad bookstores were back in the B. Dalton age before the Barnes & Noble revolution of the 1990s. At the front were two tables, one with the dozen new novels and one with the dozen new nonfiction books that Mr. Brent (1912-2010), a man of letters and friend of Nobel laureate Saul Bellow (whom I saw browsing there once, wearing several thousand dollars worth of Burberry clothes from the huge shop across Michigan Avenue), had decided you ought to read. Two of the nonfiction books I checked out that day were William Manchester’s first volume of his biography of Winston Churchill and the other was Paul Johnson’s Modern Times.

The stunned proprietor could barely conceal his anger and frustration. “I have no explanation for it,” said Brent, who has operated the store for 47 years. “Think of the shame they brought to one of the three or four great streets in America. The thing that frightens me is how close we are to barbarism.”

But in 2020 it looks like the barbarians are winning.