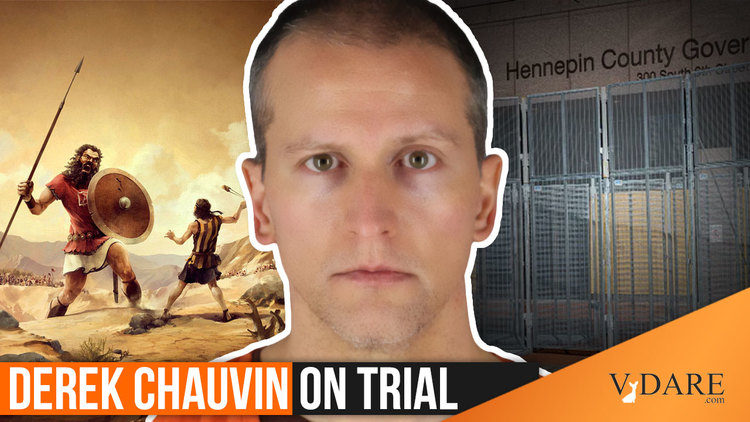 JOHN DERBYSHIRE: The Chauvin Case—David vs. Goliath In Minneapolis…And In America

Earlier (May 30, 2020): Even Right Abandoning Accused Minneapolis Cop—But They Shouldn't

Jury selection began this week for the conviction…Oops, sorry: I mean the trial of former police officer Derek Chauvin on charges that he murdered the Holy Blessed Martyr George Floyd in Minneapolis last year. As I write, here we are in Day Five of the jury selection, with half of the jurors selected. 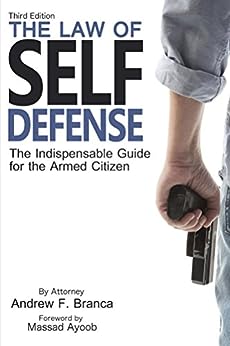 I've been following Andrew Branca's coverage of the jury selection at Legal Insurrection with side trips to Scott Johnson's coverage at PowerLine blog. Branca is a seasoned attorney in Massachusetts—thirty years’ experience in cases mostly concerning self-defense and use of force. Johnson is also an attorney, in fact a Minnesota attorney, so he knows the judge and other courtroom names.

It's clear from the accounts of these experts that the trial is David versus Goliath. David here is Chauvin's attorney Eric Nelson; Goliath is all the legal power of the state of Minnesota, plus some names drafted in from the Obama administration Justice Department.

David won that original bout, according to the First Book of Samuel, so wonders can happen. Still, while I don't know what the over-and-under was on Goliath back there in 1000 B.C., the betting has to be against Chauvin getting off.

And even if he isn't found guilty—or possibly even, as I've noted before, if he is found guilty—Kristen Clarke, the black supremacist dingbat who Joe Biden has nominated to run the Civil Rights division of his Justice Department, will come after him with double jeopardy charges: "OK, so you didn't murder him; but you did fatally deprive him of his civil rights! Ha!—got ya!"

This is American jurisprudence in the 21st century.

Judge Peter Cahill, for example dismissed prospective juror #43 “for cause.” What was the cause?

Well, last December, when the pool of prospective jurors was still being assembled, they all had to complete a 14-page questionnaire about their knowledge of the case, connections with the police, criminal record, favorite news sources, and so on. Juror #43 had responded to every question by writing: "No English." He also failed to return a form stating his citizenship or residence status.

Pretty plainly. he's an illegal alien. Minneapolis is a Sanctuary City, so you'll be relieved to know he's not in any peril of deportation. But he's off the jury.

Of those prospective jurors who are citizens of the U.S.A. and could understand English, most confessed some negativity towards the defendant, although juror #39, a male, allowed that he could imagine acquitting Chauvin if the defense succeeded in proving him not guilty.

This man has apparently arrived in adult life without ever having heard the phrase "innocent until proven guilty."

Prospective juror #40, also a male, described himself as a music teacher, albeit one unable to play a musical instrument. Hmm. In that December questionnaire, #40 had written that he got a negative opinion of Officer Chauvin in part as a result of "seeing the look on Chauvin's face on the video."

So this fellow has arrived in adult life without ever having attended a performance of Macbeth to hear Duncan say: "There's no art to find the mind's construction in the face."

I must say, juror #40's impression was contrary to mine. When I saw video of Officer Chauvin doing the knee restraint on Floyd, my impression was that Chauvin didn't look at all like a person doing something he should not have been doing.

His defense will apparently be that he was restraining a seriously obstreperous perp, using a common and approved method of restraint, until the ambulance  arrived [Neck Hold Used By Minneapolis Officer Was Approved By Department Policy, LawOfficer.com, May 29, 2020]. And that's exactly what it looked like to me.

Did he maintain the restraint for too long? Possibly. I guess that will be argued when the trial proper starts on March 29th.

If he did though, that is still not murder. At worst it's negligent homicide, like knocking down a pedestrian with your car because you took your eyes off the road to kiss your girlfriend.

But juror #40 was passed by the Lefty judge in spite of ample evidence that he was nowhere near fair and impartial. So that Chauvin's defense counsel had to use up another one of their peremptory challenges.

The whole process should end next week. What we've seen so far may not reflect too badly on the juror selection process. But it does testify to the Main Steam Media's power to brainwash the general public into believing things that aren't true.

Here's a thing that isn't true: that cops pick on blacks, arresting them in proportions greater than is justified by actual black criminality.

What's my authority for saying that isn't true? The U.S. Justice Department's Bureau of Justice Statistics, that's what.

January this year the BJS published a statistical brief: Race and Ethnicity of Violent Crime Offenders and Arrestees, 2018.

There are two sources of data for this report. One source is the Uniform Crime Reporting program, which is run by the FBI. The UCR gathers data on crimes logged by every kind of domestic law-enforcement agency: municipal, county, state, federal, even tribal and college security forces.

The other source is the National Crime Victimization Survey, a questionnaire distributed nationwide asking people aged 12 or older about crimes they have been victims of, with characteristics of both victim and offenders.

The beauty of the NCVS is that it records crimes even if they weren't followed by any police or court action. It's also a very big survey: the 2018 data for this report questioned more than 150,000 households. The downside of it is, it doesn't include homicides. We haven't yet figured a way to get homicide victims filling out a questionnaire.

So if you compare the UCR to the NCVS you are getting the country's crime statistics from both ends, from the law-enforcement end and then from the crime victim end. By comparing the two datasets you can see whether law enforcement is arresting and prosecuting in proportion as how crime is experienced.

Among the most serious incidents of violent crime (rape or sexual assault, robbery, and aggravated assault), there were no statistically significant differences by race between offenders identified in the NCVS and persons arrested per the UCR.

There is some discrepancy in the case of Hispanics, but this is probably because ethnicity isn't as plain as race. If granny gets knocked down and her pocketbook stolen by someone who then runs off, she can be pretty sure of his race, but much less sure whether or not he's Hispanic.

So all the Black Lives Matter hysteria about cops prowling around looking for blacks to victimize, and of blacks terrified to venture into the streets for fear of being shot by rogue cops, is a load of rubbish.

A colossal national hysteria leading to billions in property damage and dozens of deaths is founded on … nothing at all.

Anyone acquainted with actual cops already knew this, of course. If you have no such acquaintance, I recommend reading Connie Fletcher's 1991 book What Cops Know. It has wonderfully gritty accounts by actual cops and ex-cops, all named in the book, of what street police work is like. It's available on Kindle for $7.99 and there are plenty of copies available at Abebooks, starting at less than four dollars. I doubt street police work has changed much since 1991.

One of Steve Sailer’s commenters the other day captured some of the same flavor:

[Cops] spend every day dealing with the scum of the earth like Floyd. People like Floyd, … aside from being thieves and addicts, are also fluent liars. Maybe when you are a young and naive cop you still believe them but after a while you realize that they are lying 99 times out of 100 and so you learn never to believe them. You realize that in most cases these people bring misfortune upon themselves and so you lose all sympathy for them. You learn never to trust them because if you extend any kindness, they will take advantage of the situation in any way they can. You become very cynical about human nature.

That commenter adds, reasonably and truly, that none of what he's said would excuse criminal conduct on the part of a cop, if such conduct can be proved to courtroom standards of evidence. Still, it adds context.

The fact of cops disliking assholes does not of course exclude the possibility that some cops are themselves assholes—we all have stories.

It does, though, imply that it's unwise to exhibit extreme assholery when cops are trying to arrest you.

There's a widespread assumption, which I think is probably correct, that if by some mischance a recalcitrant jury does acquit Officer Chauvin, the Ruling Class will unleash their stormtroopers again—Antifa and BM—for another season of burning, looting, and killing.

Related to that is a very good opinion piece by Michael Anton over at the Law & Liberty website, March 10th. [The Weather Underground’s Lasting Victory]

Anton argues that the violent radicals of the 1960s have won. Big names of that violent-radical generation ended up in prestigious academic positions: Bill Ayers a Professor of Education at the University of Illinois, Bernadine Dohrn a law professor at Northwestern, Kathy Boudin an adjunct professor of social work at Columbia University, all now I think retired—honorably, of course.

Yes, the Ruling Class loves its radical Lefties, and rewards them handsomely for their efforts. Non-Leftist street protestors, however—the Proud Boys, for example, who to my knowledge have never engaged in arson, looting, or bomb-making, are hunted down like mad dogs.

If this pattern continues there's a bright future ahead for today's anarchist mobs. In the U.S.A. of 2070, our colleges and universities will be staffed by graduates of Antifa and BLM.

Perhaps they'll even be running the government.

Although, really, given the Ruling Class admiration and support they already have, what difference would it make?