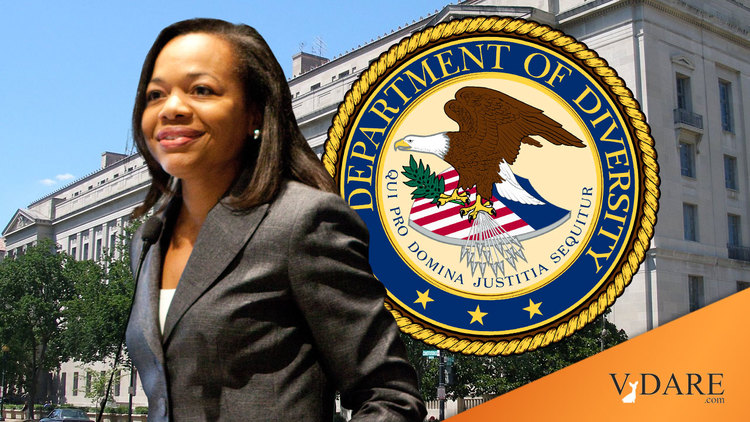 Tucker Carlson reveals a letter to the editor on "black and white genetics" written by Joe Biden's pick for Assistant AG for Civil Rights Kristen Clark written while she was at Harvard.

She also praised anti-Semite Tony Martin and invited him to speak at Harvard. pic.twitter.com/umGydmchBa

Blacks Seek An End to Abuse
To The Editors …

October 28, 1994
In response to those who defend The Bell Curve (“Defending The Bell Curve,” Opinion, Oct. 24, 1994), please use the following theories and observations to assist you in your search for truth regarding the genetic differences between Blacks and whites.

One: Dr. Richard King reveals that at the core of the human brain is the “locus coeruleus” which is a structure that is Black because it contains large amounts of (neuro) melanin which is essential for its operation.

Four: Some scientists have revealed that most whites are unable to produce melanin because their pineal glands are often calcification or non-functioning. Pineal calcification rates with Africans are five to 15 percent, Asians 15 to 25 percent and Europeans 60 to 80 percent. This is the chemical basis for the cultural differences between Blacks and whites.

Five: Melanin endows Blacks with greater mental, physical and spiritual abilities–something which cannot be measured based on Eurocentric standards.

Unfortunately, the rest of the letter is duller:

We can readily admit that an abused child is less likely to achieve academically than a child that has grown up in a supportive atmosphere. Black children, whether rich or poor, grow up with an added abuse which white children never have to face. Imagine the message that misguided information like The Bell Curve would send to a Black child who is trying to find her place in school. It’s degrading, belittling and outrageously false.

Attacks on Black people such as those in The Bell Curve are not unique. Black children face this abuse daily through television shows, jokes aired on the radio, textbooks with truncated history, etc. Liberal whites underestimate the damage which racism causes on the minds of Black children, and conservative whites know all too well how to enlarge that damage. No matter how rich or supportive a Black person’s home might be, by the time she is ready to take the SAT or apply to college, she has struggled far more extensively than any white person of the same social and economic background.

In addition, it is completely naive to say that Blacks have achieved economic equality with whites. It seems that whites have grown tired of hearing about racism. So, some have turned to measures such as The Bell Curve to relieve themselves of blame.

It’s just ridiculous. Black people are not asking for political correctness, but truthfulness, fairness and an end to this abuse.

Clarke is president of the Black Students Association.

There appear to be two undergrads who wrote this letter, so it’s possible that Kristen Clarke just wrote the boring second half of the letter rather than the fun Melanin Supremacist first half.

But in any case, she signed the whole letter.

On the other hand, she was just a silly coed then.

My big question is: Were the Melanin Supremacists of the 1990s onto something, biochemically speaking? Personally, I find that tanning boosts my mood, so I’ve always thought that this kind of Leonard Jeffries’ Sun People vs. Ice People crackpottery didn’t sound a completely implausible explanation for why blacks tend to have sunnier dispositions than, say, Finns.

Keep in mind that all sorts of prominent blacks have these kind of ties in their past. Obama, for example, regularly read Minister Farrakhan’s Nation of Islam newspaper until it finally dawned on him that Farrakhan’s economic black nationalist program (blacks should only buy black-manufactured toothpaste and the like) was a less profitable grift than appealing to rich white people, especially to Jews, who are naturally suspicious of Hotepery because it’s a gateway to anti-Semitism.

Melanin comes with compassion. Melanin comes with soul that we call it, we call it soul. We soul brothers and sisters. That’s the melanin that connects us, so the people that don’t have it are… When they were sent to the mountains of Caucasus, when they didn’t have the power of the sun, that the sun then started to deteriorate them…. [They’re] acting out of a deficiency. So therefore, the only way that they can act is evil…. They have to rob, steal, rape, kill, and fight…. They had to be barbaric. They had, because they’re in these Nordic mountains, they’re in these rough torrential environments so they’re acting as animals. So they’re the ones that are actually closer to animals.

ViacomCBS then canceled Cannon , but not for what he said about whites—that’s perfectly okay in 2020—but for punching down at the Rothschilds.

Not surprisingly, Kristen Clarke quickly got herself in trouble with Jews. From Harvard Crimson:

Last week, Wellesley Professor Tony Martin spoke at Harvard at the invitation of the Black Students Association (BSA). Martin, the author of an anti-Semitic tract entitled The Jewish Onslaught, used his Harvard forum to denounce the Jewish tradition and the Jewish people for holding a “monopoly” on centuries-worth of the notion of divinely ordained African inferiority. Repeating his belief that the “so-called Sages” of the Babylonian Talmud were the earliest racists of recorded history, Martin urged Harvard students to consider The Bell Curve, a controversial new book linking race and intelligence, as only the latest manifestation of a racist tradition spawned by Jews.

Sitting in Boylston Auditorium, listening to my heritage be defamed and lied about, my thoughts turned away from the anti-Semite at the lectern and to the young woman who had introduced him. In fact, immediately after the introduction, Martin lavished praise on Kristen M. Clarke ’97, the BSA president, who, he said, had courageously invited him “in the face of enormous pressure from the forces of reaction.” It is young people like Kristen, Martin said, who are the hope and future of the African-American community.

That last thought was one of the few true things Martin had to say. Young Black leaders like Kristen Clarke, who have risen to campus prominence by gaining the respect of their peers, will no doubt have an enormous impact on the future leadership of the African-American community. The Kristen Clarkes of America’s campuses will soon be on the front lines, fighting against racism and other societal and historical impediments to better lives for African-Americans. This is why we should all be thinking about Kristen Clarke.

What, I ask myself, was she thinking when she invited Martin to come to Harvard? Did she think Black students needed to hear what he had to say? When she told The Crimson that “Professor Martin is an intelligent, wellversed Black intellectual who bases his information of indisputable fact,” was she being serious?

The biggest question, I suppose, is whether Kristen Clarke thinks, in the face of The Bell Curve and all sorts of racism in American society, that Black students should fixate on Martin’s imagined notions of Judaism and the Jewish people as enemies of Black folk.

These are unfortunate questions. …

But Kristen Clarke has given us different questions to ask. These are unsettling questions about why the BSA must, every couple of years or so, bring the ugly specter of anti-Semitism to a lectern on this campus. Does the young leadership of the Black community think Jews and the Jewish heritage are their enemies?

I cannot answer these questions myself. That is Clarke’s job. But before she answers, I hope she understands that the anger and disappointment that will no doubt be directed at her by Jews and others on this campus are not outbursts of gratuitous hostility toward her community, but are rather expressions of hurt and anguish over the loss of what might have been between us.

Martin’s visit is a fait accompli. The damage has been done. Black students have already been barraged with misrepresentations of what the Jewish people and ethical tradition have to offer them. Since Kristen Clarke was the one who presented Martin, a certain amount of damage has been done to her credibility and the trust between her and the Jewish community.

Still, Jews cannot walk away from dialogue with Clarke. We still care deeply about the African-American community and about the injustice and poverty it faces. If Black leaders, like Kristen Clarke, are looking to the Tony Martins of this world for guidance in the form of anti-Semitic scapegoating, this should be a matter of grave concern to Jews, not only for reasons of self-preservation, but because the struggle of African-Americans for justice and equality is our struggle as well. We cannot allow the messengers of hate, like Tony Martin, to tarnish that struggle with the stain of their anti-Semitism.

Presumably, judging from her fabulous career, over time Ms. Clarke managed to answer these kind of questions satisfactorily.

Ms. Clarke’s boss’ boss is an impressionable sort, judging by how after a conversation with Kenosha knifeman Jacob Blake’s Hotep dad, Biden announced that a black man had invented the lightbulb:

Joe Biden: "Why in God's name don't we teach biology in biology classes? A black evil scientist named Yakub invented the white man. Not a white God named Yahweh. I learned this from Jacob Blake's dad in Kenosha. He hates Brussel sprouts because King Leopold was worse than Hitler" https://t.co/jLnS1Lnc35

Joe Biden: "Why in God's name don't we teach chemistry in chemistry classes? A Black man invented melanin. Not a white guy named Mendeleev. I take melanin to help me sleep. Melanin makes my mood as sunny as a Sun Person's. Just ask Kristen Clarke to explain the Science." https://t.co/jLnS1Lnc35

Joe Biden: "I was suffering an 80% rate of pineal gland calcification until I started taking melanin. My nightly melanin pill has cut my pineal calcification to 60%, which makes me 40% culturally Black. C'mon, man, Kristen Clarke knows this stuff cold."

If Bob Dole could do Viagra adds, Joe could do something like this:

Joe Biden: “I started taking one Melatin supplement every night after Kristen Clarke clued me in to how it prevents pineal gland calcification among us Ice People. Come on, man, follow the Science: Melatin is what blacks have! Now, thanks to the magic of Melatin, I sleep like an Alabama cornerback.”

VDARE.com Note: Kristen Clarke is head of the far-Left Lawyers' Committee for Civil Rights Under Law, which is a weird name for something that concentrates on violating other peoples' free speech rights, helping illegal aliens to vote, and protecting the "right" to riot.

As noted above, she specfically targeted VDARE.com's domain registrar. in an attempt to silence us, but has also attacked other dissidents and people she considers "White Nationalists".