Just when you think that Democrats can’t go any lower in disregarding the basic responsibilities of government, there’s this: New York state has flung open the cell doors of its jails to allow dangerous felons to walk free. 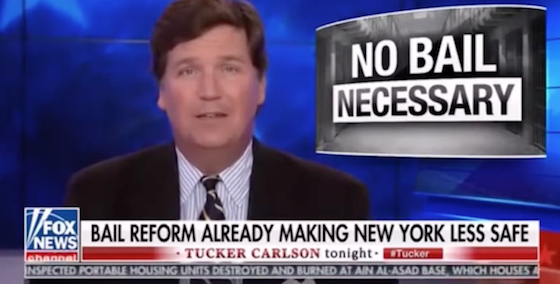 Why do Democrats think releasing dangerous prisoners was a good idea?? Do criminals have a political lobby these days?

The law is new, but the carnage is accumulating fast. Tucker Carlson’s brief segment noted several examples, one of which was an illegal alien who was released from jail after allegedly killing a mother of three. Breitbart News had details which bear consideration because they are so off the charts:

A New York state law that allows accused criminals to be freed from prison the same day they are arrested for violent crimes has freed an illegal alien accused of killing a mother of three on Christmas Eve.

Jorge Flores-Villalba, a 27-year-old illegal alien, according to Assemblyman Colin Schmitt, was arrested after he allegedly admitted to hitting and killing mother of three Marie “Rosie” Osai, who was a legal immigrant from Haiti, in a Christmas Eve crash on Long Island, New York.

“I was driving and I did strike a person,” Flores-Villalba allegedly told law enforcement officials. “I didn’t call the police. I was afraid because I don’t have a license.”

After being charged with felony fleeing the scene of a deadly accident, Flores-Villalba was arraigned and then freed without bail on Christmas day — less than 24 hours after Osai was allegedly killed. (Continues)

TUCKER CARLSON: Well, a massive change in New York this year that very few anticipated, bail laws changed. Cash bail has been abolished even for several felony crimes, and not surprisingly, criminals are taking advantage. Case in point.

A man called Gerod Woodbury was arrested last week and charged with robbing four banks since the end of the year. But it turned out to be his lucky day. Thanks to new bail laws, Woodbury was out the next day, no bail.

According to police — and this is the part you could have guessed — within a day he had robbed another bank. That would be his fifth bank robbery in just two weeks.

Nicole, you’ve joined us a lot to sort of chronicle the decline of the city and the state of New York. This seems like a quantum leap in the wrong direction.

NICOLE MALLIOTAKIS, (R-NY): Look, this is an overhaul that no state in America has seen and as a matter of fact, you named just one incident but there are so many more that we can talk about.

On Christmas Eve, you saw an illegal immigrant who was driving unlicensed who killed a mother of three, and he left the scene. He was caught and they released them back into the street.

We had a number of people assaulted including a police officer, Orthodox Jewish women who were assaulted in an admitted hate crime. We saw a woman in the streets of New York City punched — had her teeth punched out, all these individuals were released, and two of the three of them were rearrested within the same week.

And you know, the governor has not really given us a straight answer. He is saying that there’s something wrong with it. But he doesn’t want to fix it and needs to be fixed immediately to consider, first of all, someone’s criminal history, to consider their danger to society, to restore judicial discretion, to protect witnesses, which this bill actually makes you release witness information to defendant within 15 days of the arrest.

All these things need to be addressed, and people need to go to my petition and sign now at nicoleforny.com.

CARLSON: I guess I’m a little bit confused here. I mean, who’s the constituency for this? Is it bank robbers? Is it people punch who women in the face and knock their teeth out? I mean, are they the voters that Cuomo is worried about? I mean, who is for this?

MALLIOTAKIS: Well, you know, interestingly enough, you have the Democrats from all levels of government, the city, Mayor de Blasio, who wants to see Rikers Island closed is looking to release people from our jails.

We have people in the Federal level like Alexandria Ocasio-Cortez, my opponent for Congress; Max Rose, both came out and supported this and supported the closure of Rikers Island and this is all part of the problem. People are afraid. . .

CARLSON: Wait. Let me stop you there. Max Rose, the purported moderate member of Congress is in favor of this?

MALLIOTAKIS: You know, and he is not a moderate and I think people are learning that right away. But look, he said he supported the bail reform that Cuomo proposed. He also supports the closure of Rikers Island, and he is joining AOC and the squad and Nancy Pelosi and voting with them regularly.

But besides that, the thing here is that the people of New York know it’s wrong. The Democrats know it’s wrong. The governor is saying that something needs to be done and yet we’re here now, second week in session, and nobody has done anything to address it, and it’s been us, the Republicans that are putting forward legislation for fixes.

And I’ve got to tell you, if it doesn’t get fixed, there’s going to be blood on Governor Cuomo hands.

CARLSON: Yes. And people are just going to continue to leave the state, of course, because it’s like, why would you live there? Nicole, thanks so much for joining us.