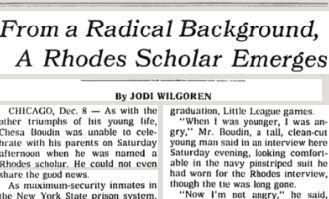 Why Don't Red-Diaper Radicals Ever Say Sorry? Because Nobody Asks Them To.

Being the child of left-wing domestic terrorists means never having to say you're sorry.

Such is the case of young Chesa Boudin, hailed on the front page of the New York Times this week for overcoming "striking challenges" and lifelong suffering to win a prestigious Rhodes scholarship. In a lengthy tear-jerker profile, Boudin is elevated to hero status as the article details his childhood bouts with epilepsy, dyslexia, and "temper tantrums," before going on to Yale, traveling the world, and hitting the lecture circuit to exploit his celebrity status. [NYT, December 9, 2002 From Radical Background, a Rhodes Scholar Emerges By Jodi Wilgoren]

Boudin is the son of Kathy Boudin and David Gilbert, members of the militant Weathermen. They're the 1960s group of rich-kid radicals who bombed government buildings and corporate headquarters, aided convicted felons in jail breaks, and participated in a 1981 Brinks' armored car holdup in Nyack, N.Y., that took the lives of three innocent Americans in the name of "peace." Boudin's mother and father were convicted for their participation in the Nyack murders and armed robbery, and remain remorselessly in prison today.

Two of the holdup victims gunned down in the botched Brinks' robbery were police officers. One was a private security guard. All three were veterans from working-class backgrounds. Neither the Times nor any other media outlet that has breathlessly reported on Boudin's Rhodes scholarship win has even seen fit to print the names of the Nyack victims: Waverly Brown, Edward O'Grady, and Peter Paige.

What about the "striking challenges" faced by these three officers' children, who were robbed of their fathers forever and have never enjoyed the privileged lifestyle of a radical son like Chesa Boudin? Brown, who served in the Air Force after the Korean War, had two grown daughters and a teenage son. O'Grady, who served in the Marines and did two tours of duty in Vietnam, left behind a wife and three children – 6, 2, and 6 months old. Paige, a Navy veteran, also left behind a wife and three kids – 19, 16, and 9.

On the matter of their suffering and hardships, Chesa Boudin and his fawning interviewers are silent.

Chesa Boudin's indifference to the victims of his parents' ideological jihad was reinforced by his adoptive parents—unrepentant Weathermen colleagues Bill Ayers and Bernardine Dohrn. Ayers celebrated bombing the Pentagon in his recent radical memoir, "Fugitive Days," and now teaches at the University of Illinois in Chicago. Dohrn declared war on "Amerikka," helped stage the "Days of Rage" in Chicago, when Weathermen blew up a memorial statue to police officers and rioted violently, leaving 75 policemen wounded and one permanently injured in a wheelchair, and then spent years as a fugitive from justice before settling into a comfy post as director of the Legal Clinic's Children and Family Justice Center at Northwestern University. [VDARE.COM note: Professor Ayers can be reached by email at bayers@uic.edu, Professor Dohrn at b-dohrn@law.northwestern.edu. Professor Dohrn's biography and CV have surprising gaps in them, stemming from her years as a fugitive from justice.]

From both his biological and adoptive parents, Chesa Boudin has learned to stew in the indignant self-pity of Marxist leftovers. "When I was younger, I was angry," the 22-year-old told his sympathetic Times interviewer. "Now I'm not angry. I'm sad that my parents have to suffer what they have to suffer on a daily basis, that millions of other people have to suffer as well."

Boudin is not talking about the families of victims who died as a result of Weathermen-sponsored violence. No, Boudin is talking about "urban misery in Bolivia, homelessness in Santiago and illiteracy in Guatemala." Praised by the p.c.-infected Rhodes scholarship committee for his "passion" and willingness to "fight the world's fight," Boudin stands by the Weathermen's revolutionary agenda: "My parents were all dedicated to fighting U.S. imperialism around the world. I'm dedicated to the same thing."

Cecil Rhodes must be turning in his grave. So, too, Waverly Brown, Edward O'Grady, and Peter Paige. What to do? While the Rhodes trustees lavish money on the red-diaper baby Boudin, there is a tiny fund to honor the officers who died in the brutal crime involving Boudin's parents. The O'Grady Brown Memorial Scholarship Fund helps deserving Rockland County, N.Y., students pursuing careers of public service in law enforcement. Checks can be made payable to: O'Grady-Brown Memorial Scholarship Fund, Inc., P.O. Box 1024, Nyack, NY 10960.