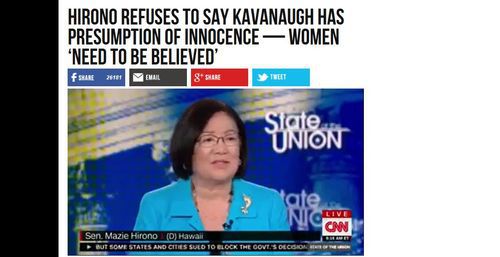 A good reason to stop immigration is that most immigrants come from the Third World, where the rule of law, shall we say, underappreciated.

Yet here comes Sen. Mazie Hirono, the big mouth from Hawaii, who doesn’t seem to understand that in America, a person is innocent until proven guilty.

Flapping her gums for the cameras during Christine Blasey Ford’s testimony before the Senate Judiciary Committee as I write, Hirono clearly doesn’t agree, as the video posted at Breitbart shows. Judge Brett Kavanaugh, she said in so many words, does not deserves the same presumption of innocence as anyone else facing the same flimsy charges..

Let’s go to the transcript:

TAPPER: Doesn’t Kavanaugh have the same presumption of innocence as anyone else in America?

HIRONO: I put his denial in the context of everything that I know about him in terms of how he approaches his cases. As I said, his credibility is already very questionable in my mind and in the minds of a lot of my fellow Judiciary Committee members, the Democrats. So he comes, and—when I say that he’s very outcome-driven, he has an ideological agenda, is very outcome-driven. And I can sit here and talk to you about some of the cases that exemplifies his, in my view, inability to be fair in the cases that come before him. This is a person that is going to be sitting on our Supreme Court,eu making decisions that will impact women’s reproductive choice. He has a—he very much is against women’s reproductive choice.

Hirono yet is another ungrateful leftist immigrant who hates the historic American nation, which might have something to do the internment of her people during World War II, or with her nation’s surrender after a punishing bombing campaign. She wasn’t here for internment, and perhaps considers herself an American, but alas, blood will tell.

But even if I’m wrong about that, and perhaps I am, despite landing here as a small child, immigrant Hirono doesn’t understand or even believe the primordial tenet of Anglo-Saxon and Christian law. If she does, she’s willing to dispense with it for this show trial. That isn’t anti-American. It’s outrightly Stalinist.

Even worse, her non-immigrant colleagues in the Senate seem to agree, as the questions they have asked Ford so far well attest.