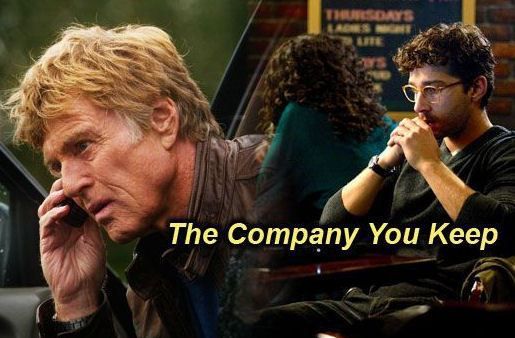 Bleeding-heart liberal Robert Redford is already the subject of early Oscar buzz. His much-hyped new film glamorizing the lives of Weather Underground domestic terrorists, The Company You Keep, will be released in the U.S. next week. But peace-loving moviegoers should save their money and take a stand.

Hollywood's romanticizing of murderous radicals is an affront to decency. Redford and Company's rose-colored hagiography of bloodstained killers defiles the memory of all those victimized by leftwing militants on American soil.

Tinseltown cheerleaders can't stop gushing about Redford's paean to gun-toting progressives, of course. Variety called the flick an "unabashedly heartfelt but competent tribute to 1960s idealism." The entertainment daily effused: "There is something undeniably compelling, perhaps even romantic, about America's '60s radicals and the compromises they did or didn't make." One of the film executives promoting the Weather Underground movie slavered: "This is an edge-of-your-seat thriller about real Americans who stood for their beliefs, thinking they were patriots and defending their country's ideals against their government."

Compelling? Romantic? Real Americans? Patriots? The movie plot centers on a 1970s Michigan bank robbery perpetrated by fictional Weather Underground members Sharon Solarz (portrayed by bigwig Democratic activist Susan Sarandon) and Jim Grant (played by Redford). The group shoots and kills one off-duty police officer working as a bank security guard. Grant goes on the lam and assumes a fake identity; decades later, a reporter launches an investigation into his role in the crime. The movie drums up "unabashedly heartfelt" sympathy for Grant as he works to exonerate himself.

Moviegoers would be better served by educating themselves about the real-life bank robbery and murder on which the movie is loosely based. In 1981, rich-kid Weathermen ideologues and lovers Kathy Boudin and David Gilbert joined forces with Black Liberation Army thugs and other ragtag commie revolutionaries to hold up an armored Brink's vehicle in Nyack, N.Y. Their booty: $1.6 million to fund their violent activities. Before taking up her assignment as the getaway vehicle driver, Boudin dropped off her toddler son, Chesa Boudin, at a babysitter's house.

Two of the holdup victims gunned down in the botched Brink's robbery were police officers. One was a private security guard. All three were veterans from working-class backgrounds. Their names: Waverly Brown, Edward O'Grady and Peter Paige.

Boudin and Gilbert were convicted and sent to prison. Prior to her arrest in Nyack, she had been an 11-year fugitive from justice after an accidental homemade bomb explosion at her New York City townhouse resulted in the death of three people. At the time of her arrest in Nyack, Boudin gave police one of many false identities she had used to evade the law.

Boudin was paroled in 2003 after convincing parole board members that she acted nobly out of "white guilt" to protest racism against blacks. Never mind that one of the officers killed, Waverly Brown, was black.

The sons and daughters of those gunned down by Weather Underground killers have lived in obscurity. Meanwhile, as I first reported more than a decade ago, Chesa Boudin has lived a pampered life surrounded by tenured academics and celebrity friends. His adoptive parents? The infamous pals of Barack Obama, Weathermen organizers Bill Ayers and Bernardine Dohrn.

Refresher course: Dohrn [email her] declared war on "AmeriKKKa," helped stage the "Days of Rage" in Chicago, when Weathermen blew up a memorial statue to police officers and rioted violently, leaving 75 policemen wounded and one permanently injured in a wheelchair, and then spent years as a fugitive from justice before settling into a comfy post as director of the Children and Family Justice Center at Northwestern University.

Ayers remains in the limelight after celebrating the Weathermen bombing the Pentagon and flitting from campuses to socialist regimes and back preaching education as the "motor force for revolution."

Chesa Boudin attended Yale, won a prestigious Rhodes scholarship, shilled for Hugo Chavez, wrote books and keeps a busy speaking schedule. He still stands by the Weathermen's revolutionary agenda: "My parents were all dedicated to fighting U.S. imperialism around the world. I'm dedicated to the same thing."

Cinematically and metaphorically, Redford manufactures the same stance that unrepentant Weather Underground criminals and apologists still hold of themselves today: Not guilty.