Race-Based Justice In Ferguson Missouri: Will Eric Holder Recuse Himself? 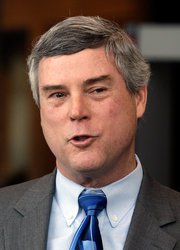 Among the demands of the "protesters" in Ferguson is that the investigation and prosecution of police officer Darren Wilson be taken away from St. Louis County Prosecutor Robert McCulloch.

McCulloch is biased, it is said. How so? In 1964, his father, a St. Louis police officer, was shot to death by an African-American.

Moreover, McCulloch comes from a family of cops. He wanted to be a police officer himself, but when cancer cost him a leg as a kid, he became a prosecutor.

Yet, in 23 years, McCulloch has convicted many cops of many crimes, and has said that if Gov. Jay Nixon orders him off this case, he will comply. Meanwhile, he is moving ahead with the grand jury.

As for Gov. Nixon, he revealed his closed mind by demanding the "vigorous prosecution" of a cop who has not even been charged and by calling repeatedly for "justice for [Brown's] family" but not Wilson's.

What has been going on for two weeks now in Ferguson, with the ceaseless vilification of Darren Wilson and the clamor to arrest him, is anti-American. It is a mob howl for summary judgment, when this case cries out, not for a rush to judgment, but for a long tedious search for the whole truth of what happened that tragic day.

For conflicting stories have emerged.

The initial version was uncomplicated. On August 9, around noon, Brown and a companion were walking in the street and blocking traffic when ordered by Wilson to move onto the sidewalk.

Brown balked, a scuffle ensued. Wilson pulled out his gun and shot him six times, leaving Brown dead in the street. Open and shut. A white cop, sassed by a black kid, goes berserk and empties his gun.

Lately, however, another version has emerged.

Fifteen minutes before the shooting, Brown was caught on videotape manhandling and menacing a clerk at a convenience store he was robbing of a $44 box of cigars.

A woman, in contact with Wilson, called a radio station to say that Brown and Wilson fought in the patrol car and Brown had gone for the officer's gun, which went off.

When Brown backed away, Wilson pointed his gun and told him to freeze. Brown held up his hands, then charged. Wilson then shot the 6'4," 292-pound Brown six times, with the last bullet entering the skull.

St. Louis County police then leaked that Wilson had been beaten "severely" in the face and suffered the fracture of an eye socket.

Brown's companion, Dorian Johnson, says Brown was running away when Wilson began to fire. But, according to the autopsies, all of the bullets hit Brown in the front. ABC now reports that Dorian Johnson has previously been charged with filing a false police report.

If the first version is true, Wilson is guilty. If the second is true, Brown committed two felonies before being shot, and Darren Wilson fired his weapon in defense of his life.

If there is any public official who should recuse himself from any role in this investigation, it is not Robert McCulloch but Eric Holder.

Holder has a lifelong, almost Sharpton-like, obsession with race.

Three weeks in office, he declared America a "nation of cowards" for refusing to discuss race more. Arriving in St. Louis, he declared, "I am the attorney general of the United States. But I am also a black man."

Query. What is the chief law enforcement officer of the United States, who is heading up the federal investigation of the shooting of a black teenager by a white cop, doing declaring his racial solidarity?

Holder then related several incidents that have stuck in his craw:

"I can remember being stopped on the New Jersey turnpike on two occasions and accused of speeding. Pulled over. ... 'Let me search your car.' ... Go through the truck of my car, look under the seats and all this kind of stuff. I remember how humiliating that was and how angry I was and the impact it had on me."

Holder also spoke of being stopped by a cop in Georgetown when he was running to the movies.

Fine. The Great Man is outraged by such indignities. But the mindset exhibited here raises a grave question as to whether Eric Holder can objectively lead an investigation of a white cop who shot a black teenager. In Eric Holder's mind, the verdict already seems in.

Any defense attorney would have Eric Holder tossed out of a jury pool, as soon as he started to vent like this.

If Holder has made up his mind about what happened in Ferguson that Saturday, fine. He is entitled to his opinion. But someone who has already decided Officer Wilson's actions are consistent with a racist police pattern he has observed personally should not be passing judgment on whether Officer Wilson goes on trial for his life.

President Obama says he does not want to put "my thumb on the scales" of justice. He should take Eric Holder's thumb off.