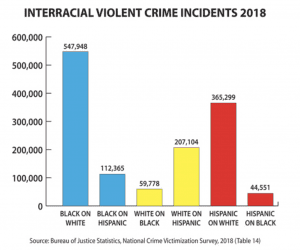 Big. It’s not something anyone wants to talk about, because it goes against all conventional wisdom promulgated by the corporate media and re-Tweeted by Hollywood celebrities of “hate crimes” rising in the age of Trump. You know what we mean: White people in MAGA hats targeting defenseless black/brown bodies. Well, it’s just not the case.

But before we get the key data, a refresher course.

Before we look at the 2018 survey of criminal victimization recently released by the Bureau of Justice Statistics, let’s refresh our memories.

It will just take a moment. In the book Hate Crime Hoax: How the Left is Selling a Fake Race War, we learn an unsettling truth seemingly invalidating the title of the book — 82 to 85 percent of interracial crime involving white and black people is black on white violent crime:

There is an astonishing level of consensus, at least among scholars, on the fact that almost all of the interracial crime that does occur in the United States is POC-on-white. In the representative year of 2008, 429,000 Black-on-white violent crimes and only 91,000 white-on-Black violent crimes were recorded by the FBI, and the proportional breakdown of interracial offenses by race was nearly identical during 2012 and 2015.

The FBI data would seem to indicate a race war is actually taking place, albeit an undeclared one, when 82.5 percent to 85 percent of interracial crime involving white and black people is black-on-white violent crime.

Yes, even Tim Wise is capable of admitting the truth about interracial violent crime. It’s almost exclusively black on white.

Which brings us to this piece by Heather Mac Donald, where she notes the Bureau of Justice Statistics 2018 survey of criminal victimization shows black on white violent crime is increasing, as she writes, “Blacks committed 537,204 of those interracial felonies, or 90 percent, and whites committed 56,394 of them, or less than 10 percent.” [A Platform of Urban Decline: Democratic presidential candidates believe America is racist, yet they ignore the evidence on crime and ensure that racial disparities persist, City Journal, September 23, 2019]

Just this month, the Bureau of Justice Statistics released its 2018 survey of criminal victimization. According to the study, there were 593,598 interracial violent victimizations (excluding homicide) between blacks and whites last year, including white-on-black and black-on-white attacks. Blacks committed 537,204 of those interracial felonies, or 90 percent, and whites committed 56,394 of them, or less than 10 percent. That ratio is becoming more skewed, despite the Democratic claim of Trump-inspired white violence. In 2012-13, blacks committed 85 percent of all interracial victimizations between blacks and whites; whites committed 15 percent. From 2015 to 2018, the total number of white victims and the incidence of white victimization have grown as well.

Blacks are also overrepresented among perpetrators of hate crimes—by 50 percent—according to the most recent Justice Department data from 2017; whites are underrepresented by 24 percent. This is particularly true for anti-gay and anti-Semitic hate crimes.

There’s not one public figure, outside of the courageous Ms. Mac Donald, who is willing to note the black-on-white violent crime problem in America. Every other public figure in America works to accentuate the relatively few white-on-black assaults as evidence of the rising tide of white racial violence in the USA.

We live in a society governed by an elite entirely dedicated to promoting perverse lies about interracial violence in the USA, which is only accelerating black-on-white violence across the nation.

But that’s not why we are here: though blacks are 47 times more likely to commit violent crimes against whites (than whites targeting blacks), what has yet to be mentioned is the incredible rate of Hispanic on white violence.

According to the study, there were 572,403 interracial violent victimizations (excluding homicide) between Hispanics and whites last year, including white-on-Hispanic and Hispanic-on-white attacks. Hispanics committed 365,299 of those interracial felonies, or 64 percent, and whites committed 207,104 of them, or 36 percent.

In 2018, Hispanics were 5.9 times more likely to commit violent crimes against whites.