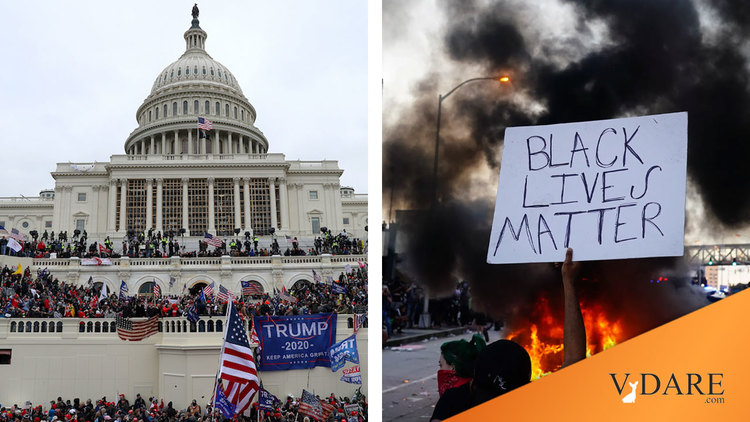 A leading candidate for the title Truer Words Were Never Said is surely T.S. Eliot's observation that,

If you want a set, that quote pairs off nicely with science fiction writer and occasional LSD user Philip K. Dick's observation in a speech he gave in 1978 that:

Reality is that which, when you stop believing in it, doesn't go away.

There is of course a great deal more than that to be said about the nature of reality—a very great deal more. This is one of the oldest topics in philosophy, overlapping with theology, psychology, physics, and other disciplines.

Neuroscience, for example. There's a mental condition called anosognosia that I mentioned in a column here at VDARE once.

Anosognosia is a condition in which the patient is suffering some severe neurological impairment but does not know it [Anosognosia, Healthline.com, February 27, 2019]. The impairment is strictly neurological, in the higher processing regions of the brain. You might, for example, be suffering from paralysis of a limb, yet be unaware of it.

There are even some extreme cases recorded in which the sufferer is blind but does not know it! The eyes and optic nerves have normal function, but the brain centers that process visual stimulus are not working. To compensate, the brain makes up a visual field, trying to use cues from memory and the other senses.

It doesn't work very well. You keep falling over things, but you can't understand why.

Western society seems to have fallen into something like a social anosognosia. Our collective senses are gathering information OK, more than ever before in history in fact. But our collective brain is failing to process it, and compensates by making stuff up.

These things all came to mind when I read this February 2nd column by the notoriously Woke New York Times technology correspondent Kevin Roose [Tweet him]: "How the Biden Administration Can Help Solve Our Reality Crisis."

Steve Sailer and Gregory Hood have tossed and gored the column here at VDARE, but it's such a big fat target I can't resist adding my two pennyworth.

The only people he actually names as being an "extremist group" are the Proud Boys. His other references are to unnamed "white supremacist groups" and "far-right militias."

In the other area of his reality crisis, "conspiracy theory movements," Roose includes believers in the QAnon theory, people skeptical of Joe Biden's election victory, and those who think Covid-19 was manufactured in a Chinese lab. Roose actually uses the word "baseless" to describe the beliefs of both latter groups.

The QAnon theory sounds loopy to me, although no loopier than the stuff a lot of harmless, productive, otherwise-sane folk carry around in their heads.

The other two points, election tampering and a lab origin for Covid, are well within the scope of possibility, not at all "baseless." Much stranger things have turned out to be the case. If Roose had said "improbable," I might have passed it without comment, but "baseless"? This is highly slanted journalism, even by the dismal standards of the New York Times.

Roose tells us that he called around some "experts" to get ideas about how we might restore a proper respect for reality. Who were they, these "experts"? He doesn't supply a full roster, but names a few names.

I confess I haven't had time to do my due diligence and look up these people's professional output, but the job titles don't inspire confidence.

"Disinformation researcher"? Uh-huh. Anyone who pays attention knows that the word "disinformation" has at this point been bled dry of all honest significance. It's just a Woke word, a CultMarx word for any true facts the Ruling Class want suppressed.

Several of the experts, Roose tells us, said the Biden administration should assemble a task force to tackle the reality crisis. This task force would be led by a Reality Czar.

Roose allows that this sounds, quote, "a little dystopian." Ya think?

My own overall response to Roose's column corresponds quite precisely with Jesus Christ's reproof to the Pharisees:

Ye blind guides, which strain at a gnat, and swallow a camel.

The gnat here is actually plural: the Proud Boys, plus QAnon believers, plus those intruders in the Capitol, plus election skeptics, plus the Covid lab theorists.

So, with all proper respect to the Savior, it's "gnats," plural.

How many city-center businesses have these gnats trashed and looted? How many police stations have they burned down? How many fine old statues and monuments have they vandalized or destroyed? How big a spike in homicides has resulted from their anti-police agitation?

All that, all that latter mayhem, is the camel. This fool Roose and his experts have swallowed it, as has most of the political Establishment and the Ruling Class. Now, with busy pen and fevered brow, they are straining at the gnats.

Problems with reality? How about Joe Biden saying after the Capitol disturbances, that:

No one can tell me if it had been a group of Black Lives Matter protesting yesterday, they wouldn't have been treated very, very differently than the mob of thugs that stormed the Capitol. We all know that's true.

It is indeed true, although in a sense opposite to the one Joe intended. As Gregory Hood pointed out in an earlier column, if BLM had raided the Capitol, our political classes would have fallen over each other to appease them, kneeling reverently and draping themselves in kente cloth. 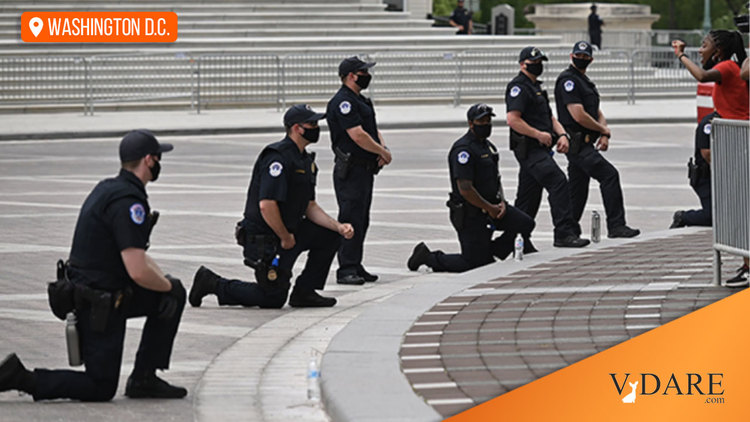 Above, a picture of Capitol Police kneeling at a June, 2020 BLM demonstration

The media would have cheered to the rafters such a bold act of resistance, and corporations would have poured in donations.

If Capitol Police had then arrested any of the BLM intruders, compliant prosecutors would have dismissed all charges. Had any of the intruders been black—I believe there are a few blacks in the BLM movement—and if by mischance he had been shot dead by a white Capitol Hill police officer, there would have been national frenzy on a scale that beggars the imagination.

If the deceased had been a black female, shot without warning by a white male cop—well, the Earth would have left its orbit and gone crashing into the Sun.

And yes, we have a national crisis of reality, with tens of millions of Americans believing, like you, preposterous things that defy all reason and evidence.

And no, I'm not talking about QAnon or election validity or the source of Covid. Those are gnats.

I'm talking about the camel.