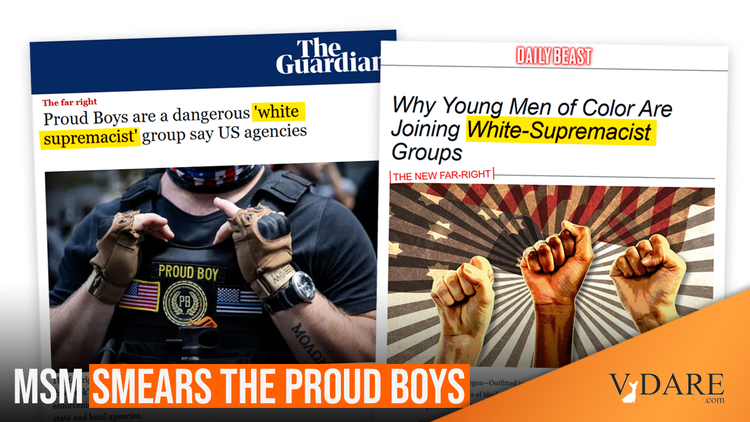 The media is in an apoplectic frenzy over President Trump’s refusal to condemn the Proud Boys. Journalists call the pro-Trump group violent white supremacists who pose a far greater danger than Antifa. And the worst part of all: Republican politicians agree with the lying press.

NBC’s @oneunderscore__: "White supremacist groups” like the Proud Boys — not Antifa — are the ones creating "organized violence“ and “domestic terror” pic.twitter.com/N9wPgkDqCi

The media image of the Proud Boys is not based in reality. The Proud Boys, despite their white supremacist reputation, are explicitly multiracial. An assortment of group pictures easily demonstrates. The group’s leader, Enrique Tarrio, is Afro-Cuban. The Daily Beast noticed the group’s surprising level of diversity two years ago, yet the outlet still concluded the Proud Boys are white supremacist [Why Young Men of Color Are Joining White-Supremacist Groups, by Arun Gupta, The Daily Beast, September 4, 2018].

This is one of the Proud Boys, with his black wife and half-black kids, who was arrested for defending himself against Antifa a while ago in NYC. Yet Joe Biden and the media keeps calling them a "white supremacist" group. pic.twitter.com/NpKM32H2qL

The Proud Boys even waited to do a group photo after the fights. They were hyped the fuck up after that. Flashing their white power hand symbol before marching towards a downtown train. pic.twitter.com/JP6jiM8Yud

Fact check for the media: You can think Proud Boys are a lot of things but white supremacists isn’t one of them, their leader Enrique is afro-Cuban. pic.twitter.com/IbE7XHvunh

National Press Secretary for the Trump campaign Hogan Gidley on Wednesday tried to clean up Pres. Trump's call for the Proud Boys to 'stand by' during Tuesday's debates, saying that the remark was actually telling the hate group to "get out of the way." pic.twitter.com/EZOQpsnuOC

Trump adviser on Trump’s proud boys comments last night: “F*** the proud boys. There I said it. Not that hard.”

It’s another depressing sign that Trump is much better than the party he leads.