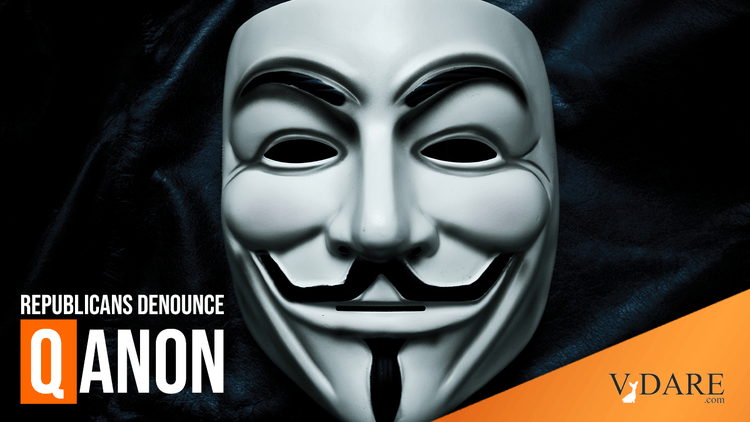 “The wicked flee when no man pursueth” and the Republicans surrender when no one is demands it. During the worst sustained riots since the 1960s, the Republican Party is showily denouncing the harmless “QAnon” conspiracy theory. But there’s been no pushback from the GOP against the actually powerful “white privilege” conspiracy theory, which is even taking root in the federal government. Worse, the Kushner Administration is enabling it by groveling before NBA players and launching federal civil rights investigations to fuel more Black Lives Matter riots. Why?

The economic damage and human toll of the BLM riots is almost beyond calculation now, but the Republican leadership has still leapt to denounce “QAnon.”

Why in the world would the President not kick Q’anon supporters’ butts? Nut jobs, rascists, haters have no place in either Party. https://t.co/uWIMg7clJz

Here Are The Republicans Who Have Denounced QAnon, Jack Brewster, Forbes, Aug 21, 2020

One could dismiss it as an empty cuckservative gesture—except H. Res. 1094 is clearly totalitarian: It calls on the FBI to “continue to strengthen their focus on preventing violence, threats, harassment, and other criminal activity by extremists motivated by fringe conspiracy theories” and to encourage Americans to seek information from “authoritative sources” and a “common factual foundation.”

Is it not enough to simply prevent crimes as such, regardless of their motivation? And why should the government be in the business of determining what is “authoritative” and what’s not, especially given that we already have entire legal doctrines (like Disparate Impact) built on objective lies?

QAnon’s premise, as explicated by websites like NeonRevolt.com: The Trump Administration is waging a shadow war against the Deep State and its crimes; and that there is a shadowy insider (Q) “dropping” information to the masses through various websites, notably the chans (4chan, 8kun, etc.). President Trump is also secretly communicating with his followers by using certain gestures or phrases, or selectively retweeting certain things.

They might be infuriated simply because the movement encourages people to do independent research. The MSM believes that it has an exclusive right to tell Americans what they are allowed to see, hear, and think. The QAnon theory also implies that disturbing things are happening in elite power circles—which, after Jeffrey Epstein and Ghislaine Maxwell, to say nothing of NXIVM, doesn’t sound so crazy.

Finally, QAnon is also a kind of stand-in for supporting President Trump himself.

However, it’s ultimately something of a mystery why journalists are so infuriated. The theory’s premise is that there is a powerful insider assuring everyone that President Trump has things well in hand and that any minute now, he’ll launch some stunning initiative that will expose everything. There’s also confirmation bias. If you are convinced that that President Trump is communicating with you, you will find evidence for it. It encourages complacency, rather than resistance.

As Morgoth’s Review has pointed out, in 2016, Trump supporters were generating new content. But in 2020, partly because of massive deplatforming by Big Tech, they’re passively waiting for “drops” from an unknown source. Unfortunately, President Trump’s countercoup will probably come around the same time as he taxes remittances, signs a Birthright Citizenship executive order, or does something about Big Tech—which is to say, never.

Perhaps I’m being overly pessimistic. But pessimism encourages people to resist and fight, rather than being complacent. It’s complacency which has destroyed the American Right, as Republicans smugly tweet about “soy boy” leftists, smelly hippies or crazy intellectuals, without realizing that the supposed losers are the ones with real social, economic, and political power.

Possibly some people might use some QAnon theory to do something dangerous or stupid. However, even if we take the most expansive definition of the movement, most Americans hadn’t heard of it until journalists began panicking [QAnon’s conspiracy theories have seeped into U.S. politics, but most don’t know what it is, Pew Research Center, March 30, 2020]. Those aren’t QAnon mobs burning cities and rioting nonstop. Besides, as President Trump himself put it, is opposing child sex trafficking “supposed to be a bad thing?” If people believe something terrible is happening and the truth is that it’s not, what’s the problem?

In contrast, the most powerful conspiracy theory today is “white privilege,” which holds that the only reason blacks and Hispanics aren’t achieving the same level of success as whites is because of white racism. (Asians are conveniently ignored.) It legitimizes violence against women. It inspires self-hatred and even suspicion of one’s own white children. It radicalizes people to murder whites, even five-year-olds, with the indifference (or silent approval) of the MSM.

Brittany Watts was murdered by a black man because he was taught to hate whites in college and thought his actions were the right way to force whites to “mend.” More generally, that’s precisely the rationale behind the riots taking place today, where riots are excused because blacks feel aggrieved.

This insane “white privilege” lie is government policy. Critical race theory and deconstructing “white privilege” is taught to employees in the Treasury Department, the Office of the Comptroller, and other public and quasi-public bodies (like the Federal Reserve) at outrageous expense [Obscene Federal ‘Diversity Training’ Scam Prospers–Even Under Trump, by Christopher Rufo, Manhattan Institute, July 17, 2020].

On Tuesday, Peterson made a YouTube video "pushing back back on the narrative of modern systemic racism and white privilege."

The video quickly hit 10,000 views within the labs and dozens of Sandia employees contacted Peterson to express support.https://t.co/vMDH2vILB7

He may lose his job—and thus far, I have seen no support from the GOP for this patriot. There is certainly nothing coming from the Trump Administration.

Instead, Jared Kushner, who sometimes seems like the real President of the United States, is reportedly reaching out to basketball player Lebron James in an effort to keep the NBA season going and prevent a player strike [Kushner says he will reach out to LeBron James amid boycott over Jacob Blake shooting, by Justin Wise, The Hill, August 27, 2020]. The Department of Justice is also launching a “civil rights investigation” into the shooting of Jacob Blake [DOJ announces federal civil rights investigation into shooting of Jacob Blake, Fox8, August 26, 2020]. This is after we know there was a warrant against him, that police were responding to a call from his girlfriend saying he was not supposed to be at her house, that he was tasered before officers used lethal force, and that he had a knife on the driver’s side floorboard of his car [Jacob Blake: What we know about Wisconsin police shooting, BBC, August 27, 2020].

At a time when President Trump could really push for Law and Order (or, if that phrase is too charged, call it Safety and Security), the Trump Administration is still pandering and bragging about how many criminals it’s let out of prison [Criminal justice reform on display at GOP convention, in panel with Ohioans, by Anna Staver, Columbus Dispatch, August 26, 2020].

Where is the criticism from Republicans for a conspiracy theory that is destroying entire communities? In Minneapolis, right now, there are riots because blacks are determined to view a suicide as a police shooting, all evidence to the contrary [Minneapolis police say shooting suspect died by suicide on Nicollet Mall, video released, Fox 9, August 26, 2020]. We have blacks protesting that whites are slaughtering them, even though FBI statistics show blacks disproportionately commit the crime.

She’s right of course–being legally classified as black brings a host of privileges, which is why people fake it, including, arguably, the would-be VP herself.

The only thing worse than the “white privilege” conspiracy theory: the conspiracy of silence among Republicans who are too cowardly to confront the real problem.