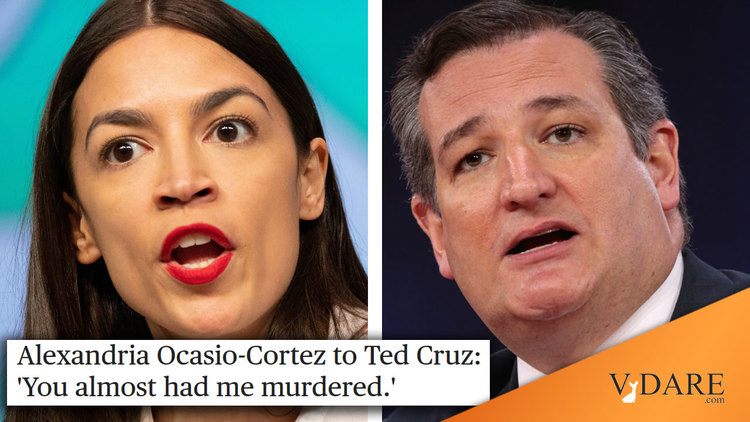 Specifically, Alexandra Ocasio-Cortez Has Paranoid Personality Disorder—Like Many Of Her Democrat Colleagues

Earlier: Yes, AOC Is Crazy. But So Are Her Democrat Colleagues

The revelation that Rep. Alexandra Ocasio-Cortez was simply fantasizing about her experiences during the Capitol Hill demonstrations, combined with her subsequent attempts to incite social media sanctions against anyone daring to point this out, is simply that latest evidence that our Leftist Ruling Class really is nuts [Alexandria Ocasio-Cortez Definitely Lied About January 6, and She Can't Handle the Pushback, by Joe Cunningham, RedState.com, February 5, 2021]. They appear to be genuinely in the grip of the paranoid delusion that the shambolic events of 6th January were an “attempted coup” when it was clearly just a protest that went too far. Conversely, they still insist that Trump’s 2016 election was due to Russian interference, no matter what the evidence might say, and that Trump, despite his liberal attitudes to homosexuality and much else, was a borderline Fascist dictator [Is Trump a fascist? 8 experts weigh in, by Dylan Matthews, Vox, October 23, 2020]. Oh, and we should be genuinely worried about “far right” “terrorists” staging a successful rebellion and violently taking over the country [The Capitol Coup Attempt Was the Far-Right’s Opening Shot, by Alia Brahmi, Foreign Policy, January 27, 2021].

What can possibly be behind this? In fact, it makes perfect sense when you consider the nature of the kind of people who are on the Left.

Depression is strongly related to the personality trait Neuroticism, which involves feeling negative feelings—such as anger, bitterness, jealousy and anxiety—very strongly [see Personality, by Daniel Nettle, 2007]. So this might explain why depression predicts values such as a desire for “equality” as well.

Also, worried about not fitting in or being excluded, and realizing you will be “accepted” if you espouse left-wing values, you can see how Neurotic people would convince themselves that they really believed these things. In religious communities, by contrast, Neurotics are the most likely to go to church—to be seen to be religious—probably for the same reasons [Primary personality trait correlates of religious practice and orientation, by Peter Hills et al., Personality and Individual Differences, 2004].

In line with this, as I have already reported, virtue-signalers are high in Narcissism; itself an expression of a fundamental sense of anxiety and insecurity. And, to make matters worse, Leftists are more strongly attached to their dogmas, precisely because they need the emotional security and that certainty of their superiority provides them with.

Interestingly, social liberals have also been found to be lower in Agreeableness than social conservatives, presumably because liberals focus on what’s good for themselves as individuals, which includes avoiding harm, over what is good for their family or extended genetic family (their ethnicity) [The Big Five Personality Traits in the Political Arena, by Alan Gerber et al., Annual Review of Political Science, 2011].

So we can expect many “liberals” to have Paranoid Personality Disorder, at least in a diluted form, to a greater extent than conservatives.

As I noted in 2019 in an article on race-denying anti-scientist Angela Saini, Paranoid Personality Disorder is characterized by extreme sensitivity to criticism, grudge-holding, suspiciousness and secretiveness, a combative sense of self-righteousness, self-aggrandizing (to compensate for paranoia about not being good enough), and a preoccupation with dangers and conspiracies.

Could there be a more obvious example of this than Alexandra Ocasio-Cortez who, possibly to deflect from the furor over the emotionally incontinent comments she recently made about Senator Ted Cruz trying to “murder” her, has now declared that she was once “sexually assaulted”? [Alexandria Ocasio-Cortez says she’s a survivor of sexual assault while describing trauma of Capitol insurrection, by Annie Grayer, CNN, February 2, 2021]. In a video on the CNN website she explains that she hasn’t “told many people that in my life,” which is rather odd behavior if you are then prepared to go and tell the whole world.

AOC compares the Trump rioters, and those who tell people to “move on” from this, to “abusers”— evidence of how strongly she holds grudges. AOC stresses “how I feel and how I felt,” betokening how self-absorbed she is. The fact that the Capitol invasion—which could never have realistically impacted her because she was a different building—made her feel “not again;” that is “Oh no, I’m being sexually abused again” betokens her extreme sensitivity and paranoia.

The self-aggrandizing is also obvious in the way that AOC makes the riot all about her feelings; and the secretiveness is clear because “sexual assault” is incredibly vague and she gives us no details.

In fact, if she is paranoid, she might even interpret as sexual assault something that most people wouldn’t regard as such at all, perhaps as a way of being “victim” and thus gaining sympathy and status in her self-aggrandizing game.

She claims “I thought I was going to die” during this “assault.” But is that what most people would have thought in the same situation? It’s hard to tell, because she doesn’t tell us what actually happened, just about her feelings.

Significantly, false allegations of sexual abuse have been found to be an issue among people who suffer from paranoid personality [False Allegations of Child Sexual Abuse and Paranoid Disorder, by Ramzan Karanfil et al., Turkish Journal of Psychiatry, 2011]. Not only do they have paranoid delusions but they are also prone to concocting allegations of abuse, presumably as a self-aggrandizing means of attaining power [Personality Characteristics of Parents Making False Accusations of Sexual abuse in Custody Disputes, by Hollida Wakefield & Ralph Underweger, IPT, 1990].

I cannot stress it enough: liberals, and especially extreme liberals, are mentally ill. Those who get into Congress are also likely to Machiavellian and have elements of Narcissism, as politicians often do [Psychology study indicates that narcissists are more involved in politics than the rest of us, by Eric Dolan, Psych Post, September 30, 2020].

We shouldn’t be surprised, therefore, that they display aspects of Paranoid Personality Disorder.

We should simply be on guard against them.