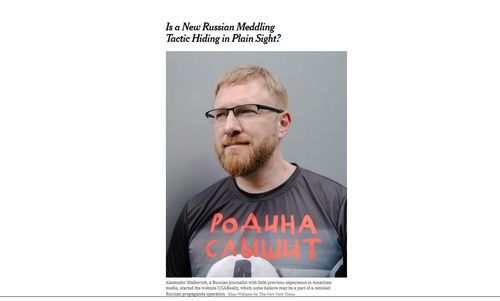 Is a New Russian Meddling Tactic Hiding in Plain Sight?

To an untrained eye, USAReally might look like any other fledgling news organization vying for attention in a crowded media landscape. Its website publishes a steady stream of stories on hot-button political issues like race, immigration and income inequality. It has reader polls, a video section and a daily podcast.

But this is no ordinary media start-up. USAReally is based in Moscow and has received funding from the Federal News Agency, a Russian media conglomerate with ties to the Internet Research Agency, the “troll farm” whose employees were indicted by the special counsel, Robert S. Mueller III, for interfering in the 2016 presidential election.

Caught flat-footed by the influence campaigns of 2016, intelligence agencies and tech companies in the United States have spent months looking for hidden Russian footprints ahead of the midterm elections.

USAReally’s website, which began publishing in May, does not advertise its Russian roots. But in many ways, it is operating in plain sight.

Its founder, Alexander Malkevich, is a Russian journalist with little previous experience in American media. Its domain was registered through a Russian company, and its formation was announced in a news release on the Federal News Agency’s website. The project, originally known as “USAReally, Wake Up Americans,” was intended to promote “information and problems that are hushed up by major American publications controlled by the political elite of the United States,” according to the release.

Today, USAReally’s website depicts the United States as a democracy in decline, riddled with crime and divided by partisan rancor.

Many of the site’s stories are similar to the divisive content that Russian trolls circulated on social media in 2016, down to their conspiratorial tone and telltale grammatical errors. (“Rabid Squirrels Is Terrorizing Florida,” read one headline.)

Some of its articles appear to have been lifted word for word from legitimate American news websites.

The amateurish appearance of USAReally has led some critics to assume that it is either a bizarre vanity project or a decoy meant to attract attention away from more covert Russian campaigns happening elsewhere. But some cybersecurity experts believe the website may be a part of a retooled Russian propaganda operation that is experimenting with new tactics ahead of November’s midterm elections, and testing the boundaries of what American social media companies will allow.

“It’s a very overt operation,” said Lee Foster, an intelligence analysis manager with the cybersecurity firm FireEye. “Perhaps it’s an attempt to move this type of activity more into the mainstream, to try to legitimize it as a media entity so that it’s tougher to take action against it.”

If only I’d ever thought of this breakthrough idea: starting a website! I’d rule the world …

[If you see disinformation before the midterms, we want to hear from you. Here is how to submit a tip.]

Why are the Russians so evil that they can’t fight fair? When Washington wants to meddle in a foreign country, we just bomb them into submission like any decent hyperpower would.

But the Kremlin uses articles.