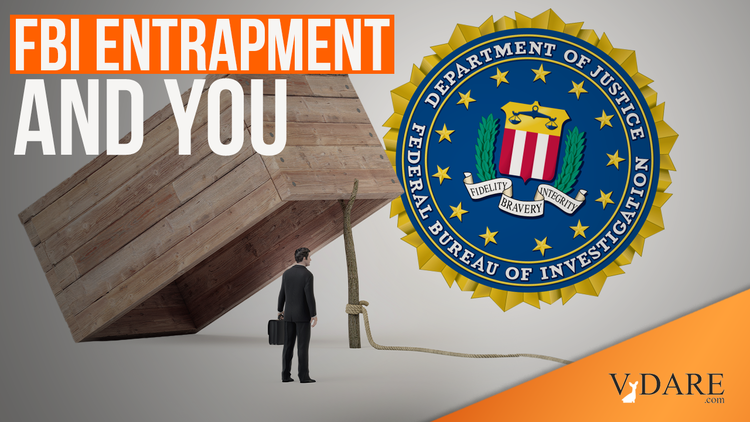 Peter Brimelow Tweeted this link to the Gatestone Institute's The FBI, Militias, Truth and Comey's Legacy,  by Chris Farrell,October 15, 2020 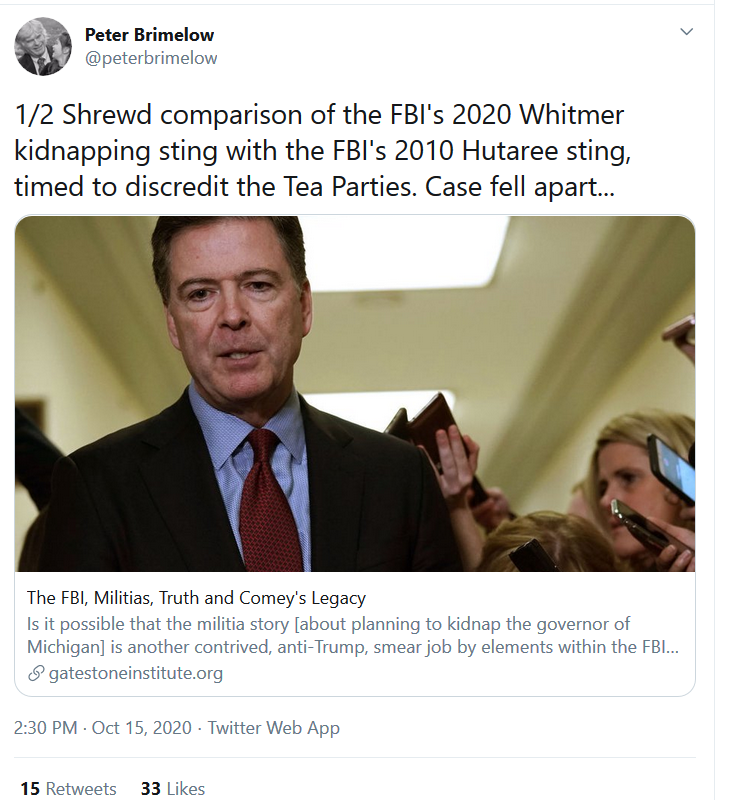 See our coverage of the so-called Hutaree Militia (local patriots in Michigan.)

[VDARE.COM Note: Peter Brimelow's comment on the Hutaree arrests [March 30, 2010] was this:

"I'm now old and scarred enough to say openly what as an MSM editor I would merely have cunningly proposed as an interesting hypothesis to some energetic young reporter: I don't believe it. I don't believe that any group of white blue collar workers would naturally want to attack the local police, another blue collar group.

"I think, as Richard Hoste has argued, that it's far more likely to turn out to be a case of entrapment by some ambitious prosecutor trying to please his/her political masters."]

See also Hutaree Militiamen Cleared In Court and Left: Get The Tea Partiers—Keep Up The Skeer!, by Peter Brimelow.

The Gatestone Institute, above, asks

And now Angelo Codevilla, who was on the inside of the National Security Establishment for years, writes

During the eight years I spent supervising the intelligence agencies for the Senate Intelligence Committee, I watched as what had been a clerisy of strait-laced guardians of truth and justice was becoming a bunch of lazy bureaucrats eager to serve the ruling class’ prejudices.

No longer doing the hard and dangerous work of investigating deeply connected criminals and subversives such as the Mafia and well-financed, politically supported subversives, the FBI limited its vision to politically correct “profiles,” and started chasing small fry. Easy targets, defended by no one. What’s not to like?

After 9/11, the FBI spent few years going after very petty Islamists while covering its collective eyes to the work of major sources of trouble, such as the Muslim Brotherhood, the Palestinian Authority, and Saudi Arabia—each beloved by parts of the ruling class. But before and after this period, these profiles more often than not pointed to the ruling class’ favorite enemy: fellow Americans “excessively concerned with their liberties.”

The FBI’s method? Place agents among the target group, stoke their sentiments, and lead them to say or do something that could be characterized as a crime, then arrest them and claim credit for foiling a plot. In intelligence lingo, that is provocation. In legal terms, it’s entrapment. By whatever name, this is the work of cheap, dirty cops.

Your FBI Will Entrap You, American Greatness, October 15, 2020

If you hear that the FBI has announced some plot, it's usually a plot they created themselves.