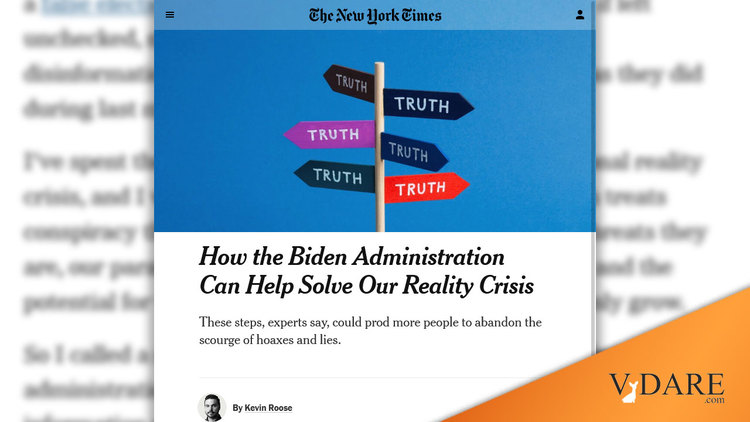 NYT: US Government Needs a Reality Czar to Censor Badthink

How the Biden Administration Can Help Solve Our Reality Crisis

These steps, experts say, could prod more people to abandon the scourge of hoaxes and lies.

Kevin Roose is a technology columnist for The Times, and the host of the “Rabbit Hole” podcast. His column, “The Shift,” examines the intersection of technology, business, and culture. You can find him on Twitter, LinkedIn, or Instagram. @kevinroose • Facebook
Feb. 2, 2021

Hoaxes, lies and collective delusions aren’t new, but the extent to which millions of Americans have embraced them may be. Thirty percent of Republicans have a favorable view of QAnon, according to a recent YouGov poll. According to other polls, more than 70 percent of Republicans believe Mr. Trump legitimately won the election, and 40 percent of Americans — including plenty of Democrats — believe the baseless theory that Covid-19 was manufactured in a Chinese lab.

This got almost no publicity, but in a survey, over 30% of Democrats blamed violence at the Mostly Peaceful Protests on white supremacists.

The muddled, chaotic information ecosystem that produces these misguided beliefs doesn’t just jeopardize some lofty ideal of national unity. It actively exacerbates our biggest national problems, and creates more work for those trying to solve them. And it raises an important question for the Biden administration: How do you unite a country in which millions of people have chosen to create their own version of reality?

In the past year alone, we have seen conspiracy theorists cause Covid-19 vaccine delays, sabotage a wildfire response and engineer a false election fraud narrative.

We have also seen that if left unchecked, networked conspiracy theories and online disinformation campaigns can lead to offline violence, as they did during last month’s deadly Capitol riot.

We’ve seen anti-white conspiracy theorists riot hundreds of times and cause thousands of extra murders as part of processing George Floyd’s death. But that’s not news fit to print.

I’ve spent the past several years reporting on our national reality crisis, and I worry that unless the Biden administration treats conspiracy theories and disinformation as the urgent threats they are, our parallel universes will only drift further apart, and the potential for violent unrest and civic dysfunction will only grow. …

Several experts I spoke with recommended that the Biden administration put together a cross-agency task force to tackle disinformation and domestic extremism, which would be led by something like a “reality czar.”

It sounds a little dystopian, I’ll grant. But let’s hear them out. …

This task force could also meet regularly with tech platforms, and push for structural changes that could help those companies tackle their own extremism and misinformation problems. (For example, it could formulate “safe harbor” exemptions that would allow platforms to share data about QAnon and other conspiracy theory communities with researchers and government agencies without running afoul of privacy laws.) And it could become the tip of the spear for the federal government’s response to the reality crisis. …

While we are drawing from Russian examples of good statecraft, how about a secret police force/army like the Soviet Union’s MVD? Of course, the Biden Administration’s MVD would have to be staffed like the DMV …