See also: Brimelow On Canada, US: "We May See Boundaries Redrawn Across North America"

The September 20 Canadian federal election has been widely derided as a remake of the 2019 election: Liberal Prime Minister Justin Trudeau failed in his gamble to win a majority, finishing essentially unchanged with 159 seats (33.12% of the vote) in the 338-seat House of Commons; the Conservatives are stagnant with 119 seats (but with 34.3% of the vote—the second time running they have exceeded the Liberals). No one dared campaign on Canada’s out-of-control immigration, but Maxine Bernier ‘s splinter People’s Party of Canada’s platform did politely call for moderate restrictions and was rewarded with an increase to 4.95% of the vote (but no seats—another fluke of Canada’s first-past-the-post electoral system, it’s as if the U.S. were governed from the House of Representatives). However, VDARE.com readers will be delighted to learn that my home province of Quebec, dominated by the vast majority of Canada’s French-speakers, showed a commendable resistance to the Anglosphere curse of Wokeness.

The separatist Bloc Québécois now holds 34 of Quebec’s 75 federal seats (with just 7.6% of the vote—all conveniently concentrated, however, in Quebec). Quebec’s provincial premier François Legault, leader of the soft-nationalist Coalition Avenir Quebec, had publicly called for a minority Conservative government, with a strong Bloc Québécois deputation that could hold it in check [Legault says minority government better for Quebec, calls NDP, Liberals dangerous,’ by Jacob Serebrin, Toronto Star, September 28, 2021]. Trudeau, like his father, is a hardcore centralizing Leftist and believes that the more power the central government holds, the better. Most of the rest of Quebec’s seats are held by Trudeau’s Liberals, whose power base is Quebec’s dwindling English-speaking minority and, significantly, newly arrived immigrants.

It’s important to note that the Bloc Québécois is the only party represented in Parliament that does not bow down to the Woke agenda. Its leader, Yves-François Blanchet, is the only leader in Parliament who refuses to adhere to the conspiracy theory of “systemic racism” and who does not consider mass immigration and multiculturalism as religious dogmas. Truly representing Quebecois popular feelings, he supports the province’s consensus objective of decreasing immigration and also, something now heretical in English Canada, to assimilate newcomers to the majority’s culture. Legault has also reduced immigration, as far as possible in Canada’s Confederal system ["Quebec nationalism could once claim to be colour- and country-blind. Not anymore," by Martin Patriquin, CBC News, January 29, 2019].

The thing is that in Quebec people do not consider their own preservation as morally wrong. Maybe because Quebecois have long been a minority in a country they originally settled, they seem immune to some of the self-flagellating tendencies currently trending among our English-speaking neighbors. To ask newcomers to adapt and adopt our way of life is seen as common sense here in Quebec, just as the concept that we can and should restrict the number of people who come into our house, especially if they impact the demographic balance. Survival as a people is rooted in Quebec’s tradition since the British Conquest of 1760.

Furthermore, Wokeism in general is often seen as “Quebec bashing”. Woke apostles like U.S.-born Iranian immigrant Amir Attaran who keep on denouncing Quebec’s supposed systemic racism have very little echo in the province. In fact, every time Dr. Attaran speaks, Quebecers react by denouncing him as a “Quebec basher” and close ranks, reinforcing their implicit reactive nationalism. (Some have gone as far as suggesting that Attaran might be paid by the separatists to boost nationalism!)

Something similar happened during the election campaign, when a Woke journalist from the government-owned Canadian Broadcasting Company, Shachi Kurl, the child of Indian immigrants, threw a charged question to the leader of the Bloc Québécois: “You denied that Quebec has problems with racism yet you defend legislation such as bills 96 and 21, which marginalize religious minorities, anglophones and allophones.”

Considered a fair question in PC-whipped English Canada, maybe even a smart one, in Quebec it was resented as yet another proof of English Canada (!) spitting on Quebec [Trudeau, O'Toole call debate question on Quebec's secularism offensive, unfair,  by Catharine Tunney, CBC News, September 10, 2021].

The Woke virus has difficulty getting a grip in Quebec.

Another recent event shows how Wokeism is anathema to Quebec: recently, premier François Legault, who has in the past recommended the reading of nationalist author Mathieu Bock-Côté, publicly shamed his opponent, Gabriel Nadeau-Dubois from the far-left Quebec Solidaire, by calling him a “Woke.” Nadeau-Dubois was quick to denounce the label as derogatory [Quebec undergoes a culture shift as ‘woke’ politics is redefined in the province, Toronto Globe And Mail, September 25, 2021].

The Bloc Québécois is a merely civic nationalist party—it explicitly opposes any racial conception of the nation. Still, implicitly at least, it defends the right of the Quebecois to remain Quebecois.

During the campaign, the Bloc’s candidates’ posters bore a simple slogan: “Québécois.” 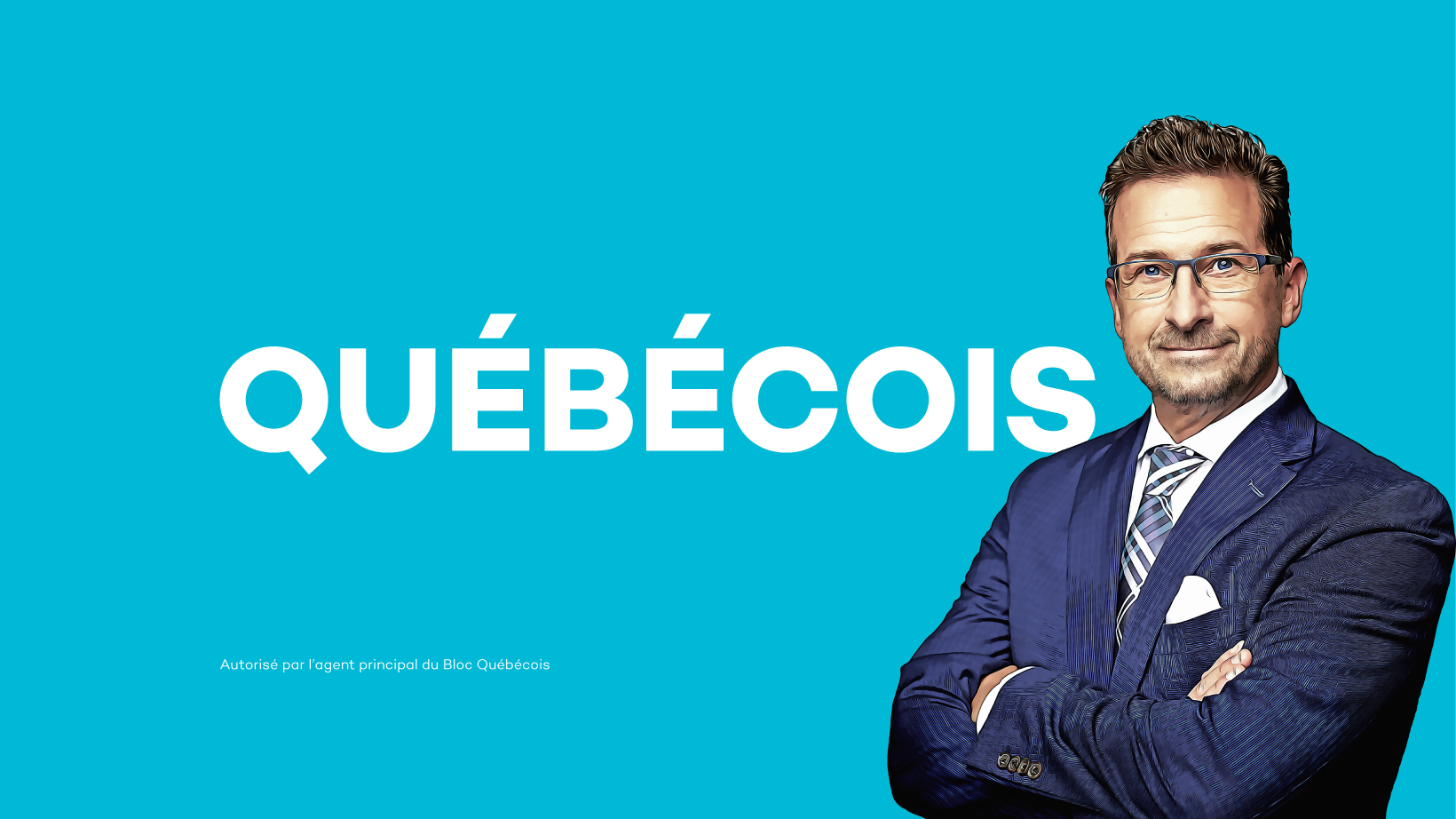 With this simple term, much was said. We can imagine that in Wokeland it would have been considered nativist, reactionary or worse (almost as bad as “America First!”).

Of course in my opinion as a Quebec identarian, using the nationalist DNA of Quebec to foster the BQ’s tasteless brand of civic nationalism is actually a betrayal of Quebecers who unfortunately have very few other options in Federal elections.

The map of Quebec, except the urban center of Montreal, where immigration has meant the displacement and replacement of the French Canadians, is almost non-Red (Red=Liberal in Canadian politics). Bloquistes and Conservatives share most of the “Deep Quebec"’s ridings (=districts), with many candidates winning more than 50% of the vote. In some French-speaking areas, there is tactical voting:  some vote Bloc or Conservatives to block a majority liberal government. In both cases, anti-Trudeau feelings are a major factor.

Montreal, where French-speakers are slowly disappearing, represents the exception in the Belle Province: the very few Old Stock Quebecois who have not moved out live in expensive ivory towers and enjoy the company of each other while professing wokeism as their creed, with Montreal mayoress  Valérie Plante being their spokesman. Sorry, spokeswoman [Montreal aims to break down barriers for immigrants in the workplace, by Marian Scott, Montreal Gazette, January 15, 2020].

In 1995, Montreal Anglos thought of seceding Montreal from the rest of Quebec if the referendum on separatism won [Montreal Journal; Quebec's Anglos Talk of a Separation, by Clyde H. Farnsworth, NYT, March 25, 1995]. Many French-speakers outside Montreal would now like to see this scenario happen.

With mass immigration continuing both in Quebec, and in Canada to an even larger extent, Liberals are actually gaining ridings without any effort. As “diversity” is overflowing the urban centers, the Liberals spread their influence and increase their chances at the future elections. The “ethnic vote” being almost automatically Liberal, mass immigration is actually more efficient than any campaigning or promises [Liberals to make immigration to Canada much easier,  by Lorne Gunter, Toronto Sun, September 26, 2021].

Replacing Old Stock Canadians, both English- and French-speaking, with more loyal voters may be cynical, but it is a long-term strategy that works—at least for now.

Hard to imagine that when Bertolt Brecht humorously asked “Would it not be simpler, if the government simply dissolved the people and elected another?” that his joke would become a political program in Canada decades later.

Rémi Tremblay (email him) is the editor of Le Harfang and a contributor to the Council of Euro-Canadians. He is the author of  Le Canada français, de Jacques Cartier au génocide tranquille.